Price Realized: $ 3,400
Price Realized: $ 4,080
?Final Price Realized includes Buyer’s Premium added to Hammer Price
Estimate: $ 3,000 - $ 4,000
(SLAVERY AND ABOLITION--RACIST HUMOR.) TREAGAR, GABRIEL SHEAR. Life in Philadelphia, Tregear's Black Jokes. A group of twenty-three hand-colored engravings, depicting African Americans in grossly exaggerated stereotypical poses; with the exception of three, all have had their margins trimmed to some degree; in almost all cases, captions are intact, and none have suffered any loss to the images. All have been tipped on to old wove paper, probably from a large album. must be seen. includes number one in the "black jokes" series as well as the famous lampoon of the 1833 emancipation in the west indies "grand celebration ob de bobalition ob African slabery." London, circa 1828-1834
Set Alert for Similar Items

Gabriel Shear Tregear (1802-1841) was an English publisher of caricatures and prints. Active from the late 1820s until his death in 1857, he operated his "Humorous and Sporting Print Shop" from quarters at 123 Cheapside, London. The present series "Life in Philadelphia," and the "Black Jokes," were copied from the American engraver Edward Williams Clay's original series appearing serially in the 1820's and 1830's. There were 14 caricatures in Clay's original series, modeled after Edward Cruikshank's "Life in London, but Gabriel Tregear seems to have been inspired to create some of his own above and beyond the original series.
Included are the following from Tregear's Black Jokes: "No.1 The Promenade," "The Advertisement," "Blackberrying," "The Breaking up," "The Concert," "Don Juan and Zerline," "The First Lesson," "The Elopement," "The Wedding Feast," and "The Lubbers' Quarrel." From the Life in Philadelphia series: "An Unfair Reflexion," "Grand Celebation ob de Bobalition ob African Slabery," "A Crier Extraordinary," "Take away, take away dose rosy lips," "What you tink of my new poke Bonnet Frederick Augustus," "Shall I hab de honour to dance de next Quadrille wid you Miss Minta?," "How you find yourself die hot weader Miss Chloe?" "I look bery pale dis morning Monsieur, so just be kind enuf to paint me wid a little Colour," "Othello, Desdemona's Asleep," and "A Black Charge." The following three are full-margined and tipped to large sheet of old wove paper: "The Lubbers Quarrel," The Lady Patroness of Alblacks," and Venus and Adonis." 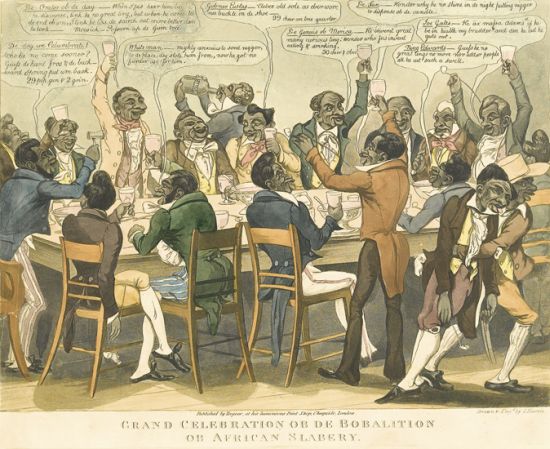