William Wheeler Bolster Jr. (1873-1944) was a native of the town of Mexico in Maine, and an 1895 graduate of Bates College. He was an avid outdoorsman, and later became a physician in Lewiston, ME. In 1899 he spent several weeks with a group of friends travelling across South Dakota by horse, covered wagon, steamboat, and railroad. The party began in Pierre on 23 July, and continued west by horse and wagon to Interior and Farmingdale. Bolster took a side trip by rail to Rapid City, Spearfish, and Deadwood, and rejoined the party to head back northeastly, with the diary concluding in Redfield.
Bolster's diary offers a lively account of a young state which has scarcely moved past the frontier era. The party had constant trouble with its covered wagon ("prairie schooner") and the boggy "gumbo land" soil, but was able to secure food and water at ranches and other settlements on their route. They met an ornery cowboy near Interior who had recently "rode his pony into a saloon & shot the lamps & looking glasses in pieces when on a drunk in Oacoma," rumored to be "a generous all round good fellow when sober & is all right when drunk if you keep out of his way" (30 July). They stopped with white frontiersman Hank Clifford and his Indian wife: "Clifford's squaw one of the blackest I ever saw" (2 August). Clifford told tall tales of his service as a guide for Custer, his dislike for Buffalo Bill Cody, and his Indian relic collection (4 August). Another character was John F. Backus, self-described "first cousin of the god of wine" (3 August) and postmaster of tiny Casey, who assembled "a lot of his half breed friends" for the party's amusement (5 August).
The most perilous moment for the travelers was getting caught in the midst of a cattle stampede: "Steers very wild. I dismounted, was ordered to mount at once or get killed by steers. Walter & Richard came over on foot to take pictures. Stood in front of about 200 wild steers . . . all lined up ready to rush at them. Cowboys shouted for them to lay down. I rode up & got them behind my horse" (19 August). On other occasions, Bolster shot prairie dogs, jackrabbits, plovers, and a rattlesnake, and saw antelopes and one gray wolf: "started after him, could not get near him, so fired three shots at long range to see him run" (24 July). He also "came across a large snake which I shot with revolver. I then . . . took my lariat & dragged it to camp (western style). Measured snake, 5 ft, 4 inches, called bull snake" (6 August). Bolster had some interest in archaeology, and found a Sioux arrowhead among bleached buffalo bones (28 July) as well as "wagon loads" of fossils including "bromothesaurus, camel and rhinocerous . . . but found no good heads" (5 August). The diary is accompanied by a modern transcript.
The accompanying photograph album is sparsely captioned, but images can often be matched up with descriptions from the diary. Two views of Deadwood are readily identifiable. Other images show the rugged conditions of both the camping party and the Dakota settlers they met, cattle herds, a wrecked buggy, and a tipi. Taken together, this diary and album offer a vivid picture of South Dakota just a generation removed from the Black Hills gold rush and Wounded Knee. 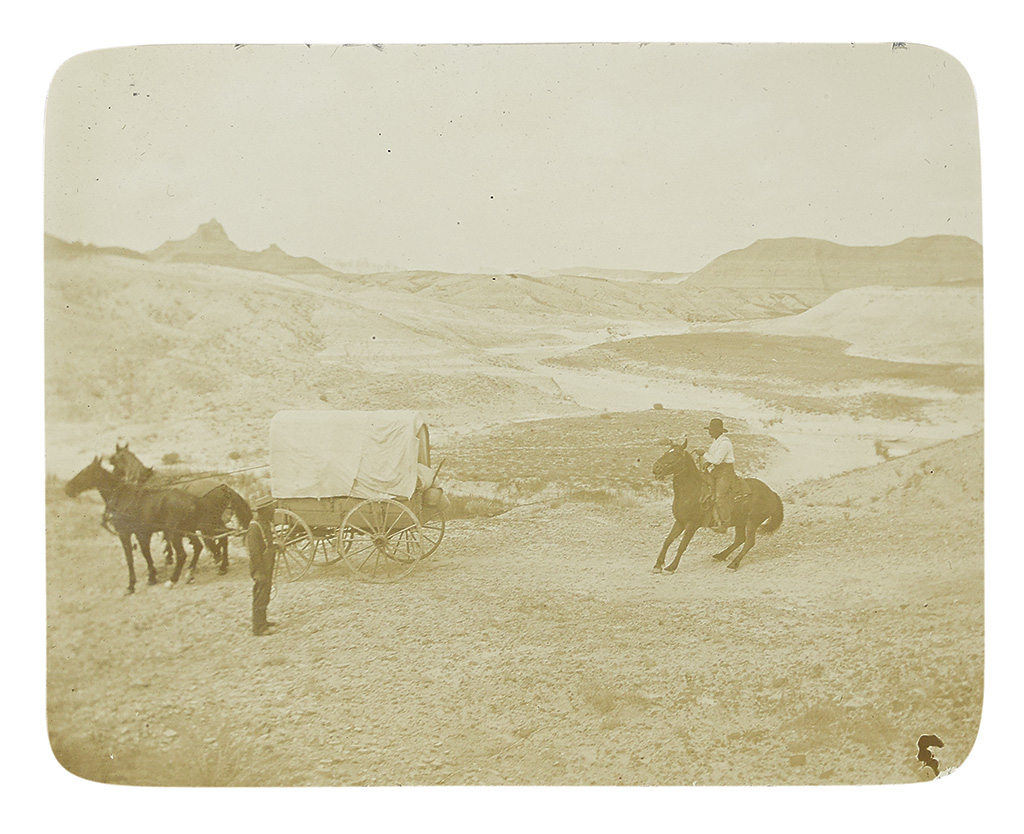