José de Azlor (d. 1734) was a Spanish nobleman who went to New Spain in 1711 to take possession of his family's massive hacienda, which covered almost half of Coahuila Province. In this petition, he asks Philip V, King of Spain, to confirm his family's title to the land. This fascinating petition recounts his family's services to the crown in great detail, starting with his great-great-great-great-grandfather's service under Hernando Cortés and continuing through numerous other exploits in New Spain.
Most notably, Azlor recounts the introduction of cattle to the neighboring frontier territory of Texas: "Queriendo poblar la de los Tejas el Virrey Marqués de Valero el año de 1717, como lo executó, le quiso comprar al Suplicante de cuenta de V.M. 200 Reses de cria, por no aver ganado mayor en aquella tierra, con que sirvió á V.M. sin querer recibir mas interés, que el grande que tuvo en servir con ellas á V.M." Texas at that point was almost uncolonized, consisting of just one presidio and one mission. When Azlor supplied 200 heads of breeding cattle to the area, it may have marked the beginning of the cattle ranching in Texas.
The Marqués would soon serve an eventful term as governor of Coahuila and Texas from 1719 to 1722, during which he established several missions in Texas and led the expedition which drove the French permanently from Texas. As none of these impressive services to the crown are mentioned in this petition, we can be confident it was issued circa 1718. Only one other copy is listed in OCLC, at Yale; not found in European Americana, Medina, Palau, or Wagner's Spanish Southwest. Provenance: sold by Argosy Bookstore to the consignor in 1980. 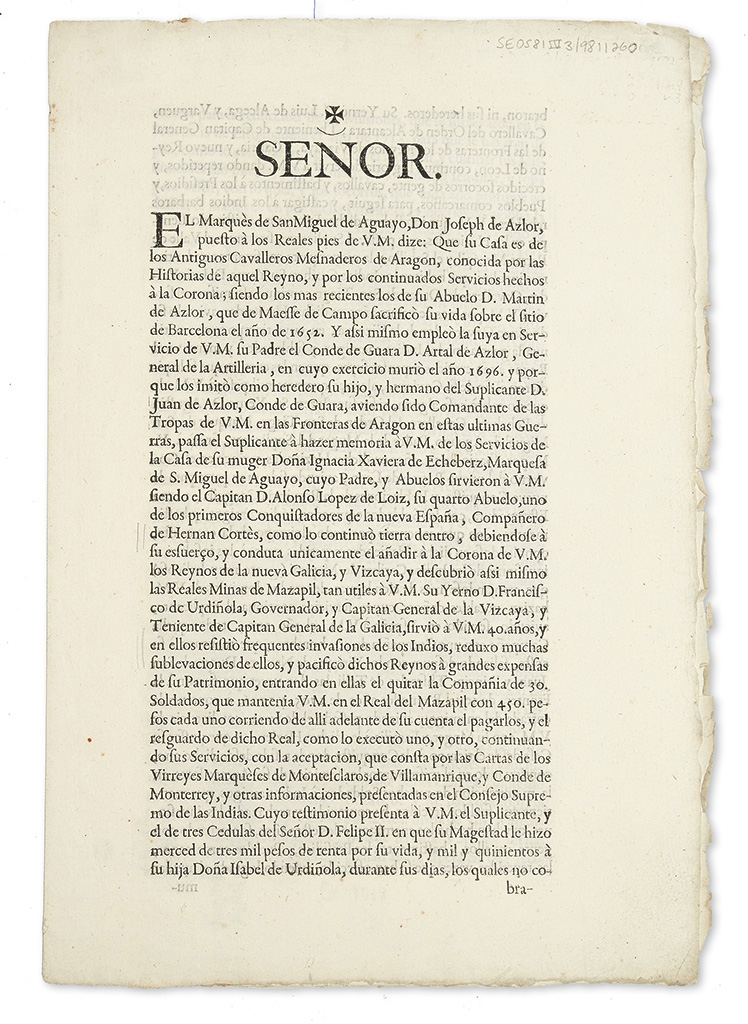