An interesting western travel diary. The anonymous female author records traveling from Springfield, MA, through western New York by boat to Detroit, up through Mackinaw, MI into Lake Michigan, south to Chicago, and west by stagecoach, stopping for 24 days in Keosauqua, Iowa. She returns via steamboat down the Mississippi through St. Louis, up the Ohio River through Pittsburgh, and home to Saco, ME. Highlights include descriptions of Niagara Falls and its burgeoning tourist attractions, dining at a Galena hotel "with some forty gentlemen, myself the only female present," an attempt to visit the "Kentucky Giant" Jim Porter but settling for a glimpse of his 8-foot sword, and the rescue of a man overboard on the Ohio River who nearly drowned. A visit to the steamboat steerage deck on Lake Michigan revealed "a motley crew of emigrants, some Americans, live stock in abundance, horses, pigs, sheep, chickens, turkies, guinea hens, and peacocks. Below all these and almost in darkness were English, Irish and Dutch families, all going to seek homes in the far west. Little children were lying about in every direction. It was a most filthy place. To my surprise, they all seemed cheerful and happy."
Most notable is a 28 July visit to "Nauvoo, the famous Mormon city," with an architectural assessment of the still incomplete temple, adding: "Found the Mormons very attentive. Numbers of them were at work on the temple. I was told they expect Joe Smith to appear at its dedication, hence their haste to complete it. . . . They have very few handsome buildings, and one would not judge from the appearance of the place that the population numbered 13,000."
No year is given in the diary, but a perpetual calendar shows that the only possibility during Nauvoo's brief heyday would be 1845. The diary is not signed and contains few biographical hints. However, the traveling party originated in Saco, ME and went to Keosauqua, IA, where they stayed for 24 days--presumably visiting family. The diary was found among the papers of Mary Chase Hamilton Whitman (see lot 288), whose aunt Lucy Chase Taylor (1792-1853) of Saco had settled in Keosauqua not long before. The diarist was presumably a close female relative, most likely Lucy's mother Mary Gould Chase (1792-1853). In the rear of the volume is a later manuscript poem addressed to Mary [Whitman?] by "her dear cousin A.S. Chase." 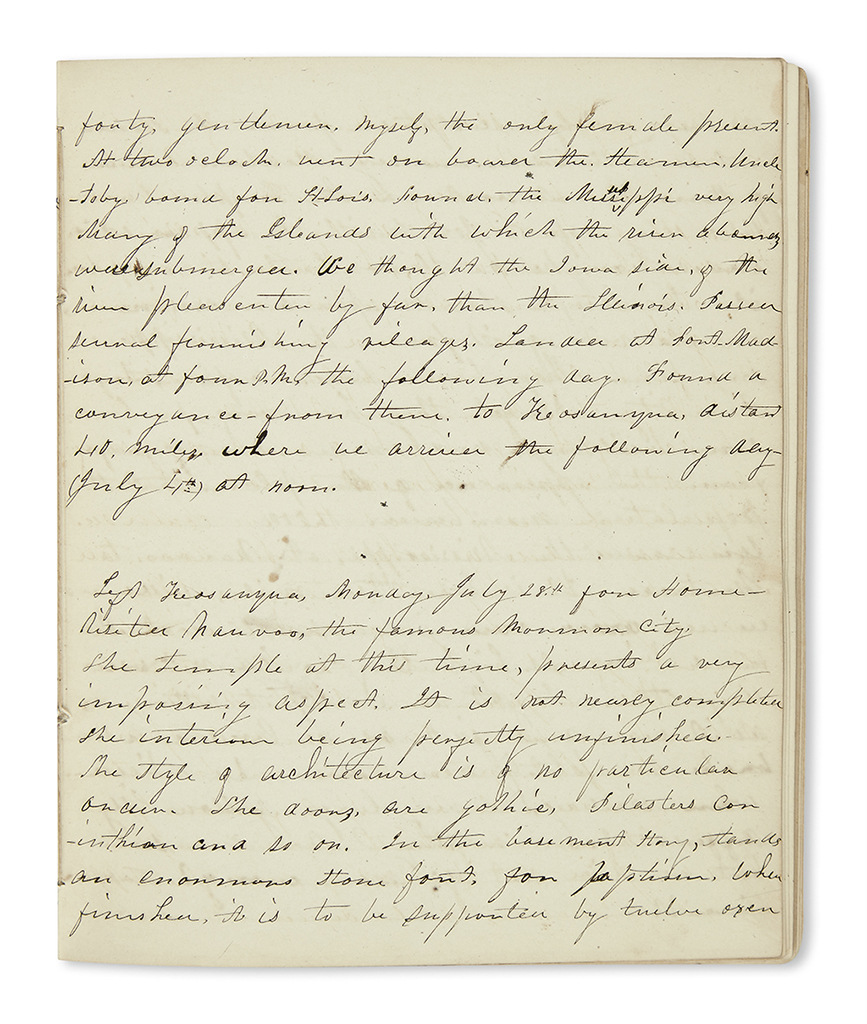