This has almost everything you might hope for in a Western diary: friendly Indians, hostile Indians, Mormons, Mexican sheep herders, breathtaking mountain scenery, and even some affectionate frontier ladies. It is also an unpublished and apparently unknown account of an important scientific expedition, written by one of its key members.
The Macomb expedition was arranged by the Smithsonian Institution under the command of Captain John N. Macomb, with the chief scientist being Dr. John Strong Newberry. Their immediate task was to survey and map the route from Santa Fe, NM north to the junction of Green and Grand Rivers in Utah, but they were also collecting geological data. A military escort from the 8th United States Infantry accompanied the expedition for most of its route, led by 1st Lieutenant Milton Cogswell. The diary is unsigned, but its content strongly suggests that it was written by the leader of Macomb's military escort, and the handwriting matches known examples from Cogswell.
Cogswell's detachment was there to protect the explorers from Utes, Navajos, and Mormons--the latter perhaps being considered the most dangerous, as Mountain Meadows had taken place nearby just two years before. The diarist refers at one point to a "rumour of a fight between the troops and Mormons" (4 August), and they later camp at a site known as Mormon Spring, noting "there are no signs of the Mormons having been here, though the guide says that they follow this trail on their trips to the Navajoe country" (30 August).
The expedition frequently encountered American Indians on their journey, many of them known to the author from his previous time in the region. At Frenchman's Creek, "here met my old friend Son Vetah with his band of Utes. All appeared fat" (30 July). The next day at the Piedra Posada, "had a visit from Delgadito, an Utah chief that has never visited the settlements. He has a crafty expression but talks friendly. Heard a rumor that we were to be attacked on the River Dolores by the Meratores and Sebawatches. . . . His home is on the Dolores but he left his country for fear of inroads from the Navajoes. Saw many of his women gathering sarvice berries. They make the berries into a cake that they dry for winter use. . . . Cabazon, another chief whose home is on the Anamoz, has also left for the mountains. Cabazon planted a little corn this year, the only Ute guilty of so much foresight" (1 and 2 August). The expedition was later "visited by 17 bucks and 3 squaws of the Savareache Utahs, on a begging expedition" (30 August). The group also passed the ruins of many ancient pueblos (4 August, 4 September, etc.)
The author also reflects on the women of Abiquiú, one of the few settlements the expedition passed through: "The girls in this place are quite pretty. It is the last settlement on the frontier. . . . Oh the fair ones of Abiquiu appear so very sorry to see so many of their beaux leaving. Many tears shed and any quantity of hugging and blessings given & taken" (18 and 19 July).
In addition to military duties, the author was also in charge of a large supply team of soldiers and Mexican laborers, who followed the expedition with pack mules and sheep. The misadventures of these men are recounted in detail, with entries like "Corp. Mayberry drunk, did not reach camp until the next day. Price either lost or sold a sack of sugar" (15 July). A mysterious disease struck down several sheep on 10 August, to which the author noted "If this continues, goodbye Grand River." The author was not a naturalist, but often commented on the beauty of the landscape. One canyon in Utah was described as "perfectly grand, the grandest I ever saw" (22 August)--a full decade before the actual Grand Canyon received its name.
The Macomb-Newberry's expedition report was almost forgotten due to the Civil War, but was published in 1876 as "Report of the Exploring Expedition from Santa Fe, New Mexico, to the Junction of the Grand and Green Rivers of the Great Colorado of the West." It remains an Americana classic (see the following lot, from a different consignor). The expedition's work has left its mark in history, most recently in Steven Madsen's "Exploring Desert Stone: John N. Macomb's 1859 Expedition to the Canyonlands." However, this expedition diary appears to be completely unknown until now. 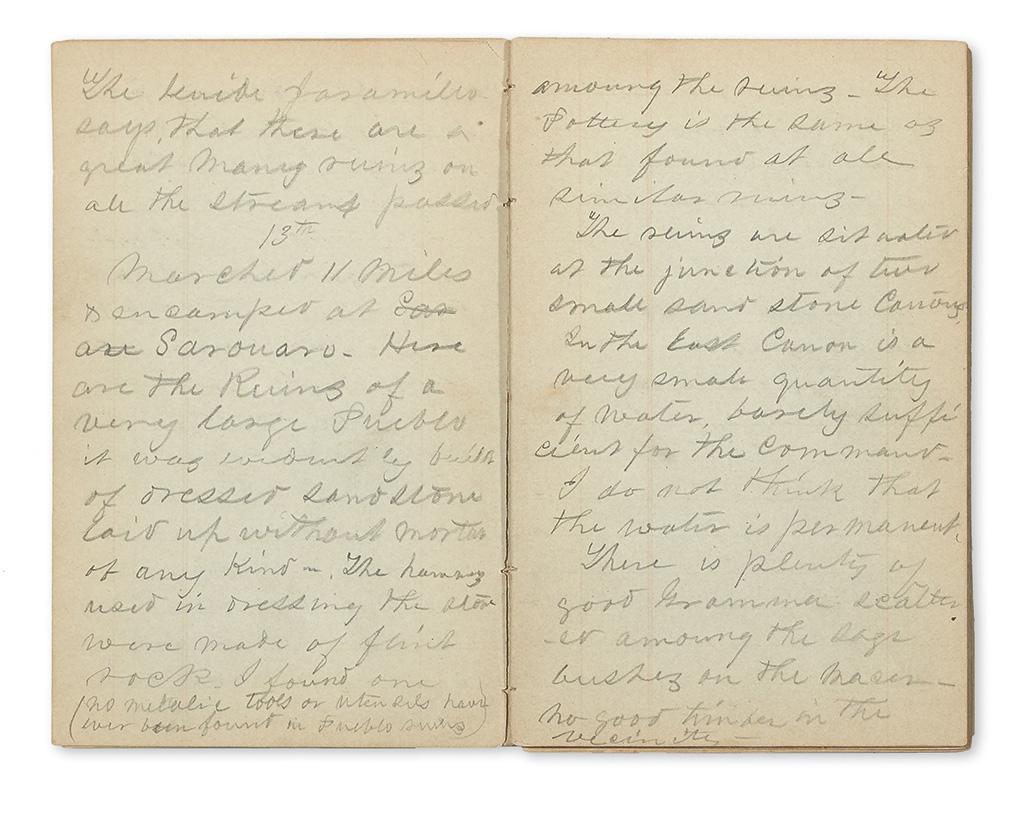