Elizabeth F. Houghton (1805-1892) of Woodstock and Hartland, VT began keeping a diary in 1820, though she initially called it her "Book of Visits, Company, Acquaintances and Connexions." She finished attending school on 15 March 1823, and a few weeks later began teaching a school of her own in nearly Hartland, VT: "Brother Hogeman came for me to keep school. Went home with him" (3 May). This led to her "first acquaintance with the Connecticut River and a boat" (20 June 1823). The school did not last long, though she did teach lessons again in March 1828, and commenced a regular school again on 14 December 1829 (classes were held on Christmas). She spent most of her time in spinning wool and housework, with a busy social calendar. She often noted her reading. The diary is nearly continuous (though not kept daily) from 2 April 1820 through 1 January 1831, with additional volumes covering a few months of 1831, 1834, and 1836. Her diary is almost completely devoid of religious content for the first ten years, but a new volume beginning 8 March 1831 notes "Great preparations made for our visit, but mind was wholly on myself. I wanted religion." Some of the subsequent entries are deeply spiritual. The first sustained talk of the frontier is in April 1836, when she corresponds with a cousin named Charles Fletcher who has removed to Chicago. Her brother Pascal Houghton leaves to join him in Chicago on 10 May, and her diary ends on 7 July. Records show that Elizabeth and her parents left for Fremont, IL in 1839, where she married her cousin Charles.
Among Elizabeth's other papers are 10 other memorandum books, 1820-35, some of them similar to diaries, including three "Books of Work" which detail her spinning and her reading; 2 account books, a copy book written as a student, 2 volumes of religious memoranda from 1835, a recipe book, and a notebook kept as a teacher from 1827 to 1830 which includes some notes on her students. She also saved four printed invitations to balls, 1820-23; and 13 printed and manuscript certificates of merit received from her teachers, 1816-17 and undated. A bundle of graphics includes several sketches and watercolors, presumably done by or for Elizabeth; one shows two women exchanging flowers (illustrated).
The collection also includes a few papers of Elizabeth's father Plutarch P. Houghton, husband Charles Fletcher, and daughter Mary Fletcher Sowles. Most notable are three receipts issued to Plutarch Houghton for the family's passage west from Whitehall, NY to Buffalo, September 1839. Her future husband Charles Fletcher's papers include a receipt from him own westward journey in Detroit, October 1835. A handful of receipts and accounts document their early years on the Illinois frontier. 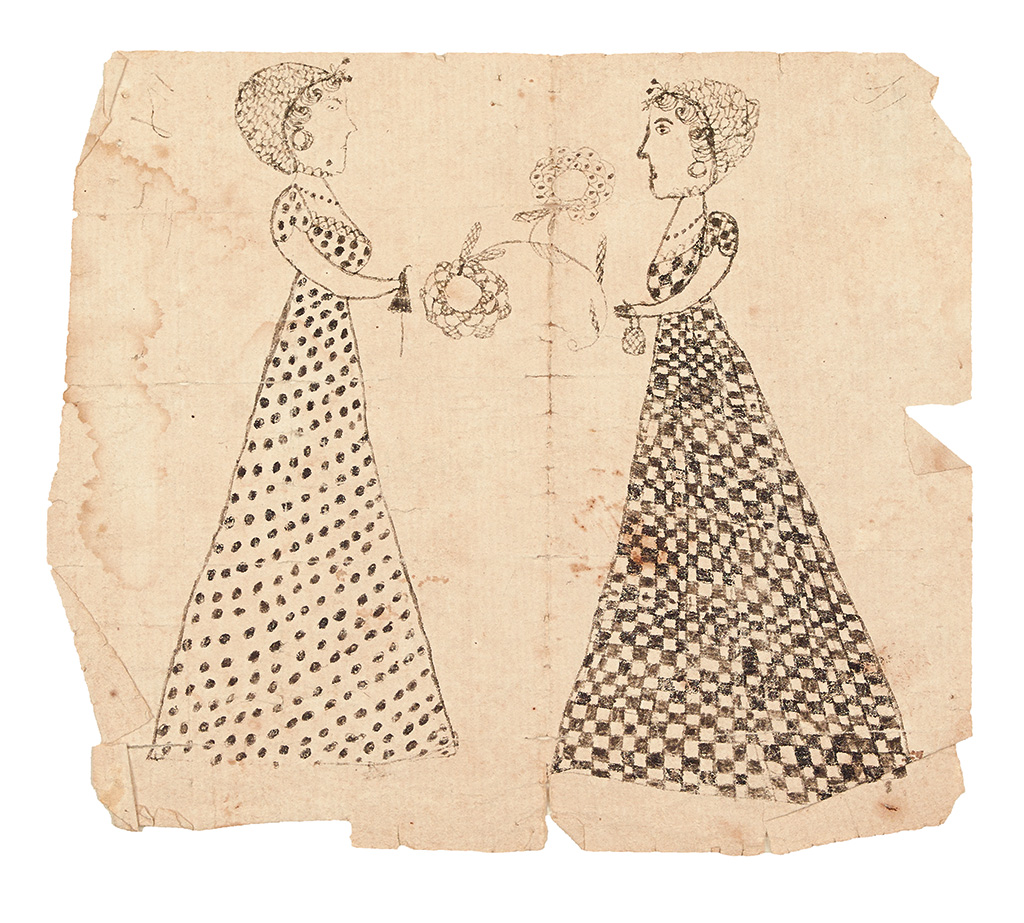