The Marquis de Lafayette, the famed French general in the Continental Army, made a grand return in 1824 to the nation he helped create. On 17 October, his party visited Mount Vernon to pay respects to his friend and mentor. As described by Lafayette's secretary Auguste Levasseur, "We again took the path which leads down to the shore. Our march was a silent one. Each of us bore in his hand a branch of cypress, cut from over the tomb of Washington. We might have seemed an afflicted family, returning from committing to the earth a father dearly beloved, who had been removed by death. We were already on board, and had proceeded far over the rapid waves, before any person broke the silence of meditation. At length Mount Vernon disappeared behind the winding and elevated banks of the river, when all assembled in the stern of the vessel, and listened attentively until evening, while General Lafayette spoke of Washington" (page 176 from the 1829 translation of "Lafayette en Amérique"). Offered here is the cypress branch Lafayette cut on that solemn occasion.
Why this presentation bears a date of 24 May 1821 is unknown--Lafayette was not in America at any point between 1784 and 1824. However, this artifact has a long provenance and was explicitly described by his Lafayette's descendants as being cut personally by the general at Washington's tomb. An engraved label is affixed to the rear of the board from art supply merchant Delarue fils ainé of 46 rue de l'Arbre-Sec. At least 6 such dealers operated at that address in the early 19th century, but Delarue was there no longer than 1823 to 1828, per Labreuche's online guide to Paris art suppliers. Delarue at a minimum supplied the board in the years immediately following Lafayette's return to France; they may have handled the matting, framing, and even the watercolor embellishment as well. In 1888, the piece was the property of Edmond Motier de Lafayette (1818-1890), grandson of the general, and the last surviving descendant in the male line. Edmond left his Lafayette artifacts in his will to his grand-nephew, the Marquis Paul Marie Rene Gaston de Sahune-Lafayette (1855-1942), the great-great-grandson of the general, who had been authorized to use the Lafayette name by presidential decree. He kept it on display at a small museum in the general's birthplace, the Château de Chavaniac. In 1893, he loaned it to the World's Columbian Exposition in Chicago, where it was listed in the "Catalogue de l'Exposition Historique des Souvenirs Franco-Américains" as item #4. On 29 February 1912, the American Art Association offered a "Collection of Relics and Souvenirs of the Marquis de Lafayette" owned by Marquis Sahune-Lafayette. Sahune-Lafayette asserted that the artifacts in this sale were "genuine and original Articles" and "there are no duplicates or replicas of any of them in existence." Lot 4 was described as "Branch of Cypress, cut by Lafayette on Washington's grave at Mount Vernon, May 24th, 1821." According to a recap in the next day's New York Times, it sold to Mrs. Henry Alloway, nee Mary Louise Tuttle (1858-1929) for $95. 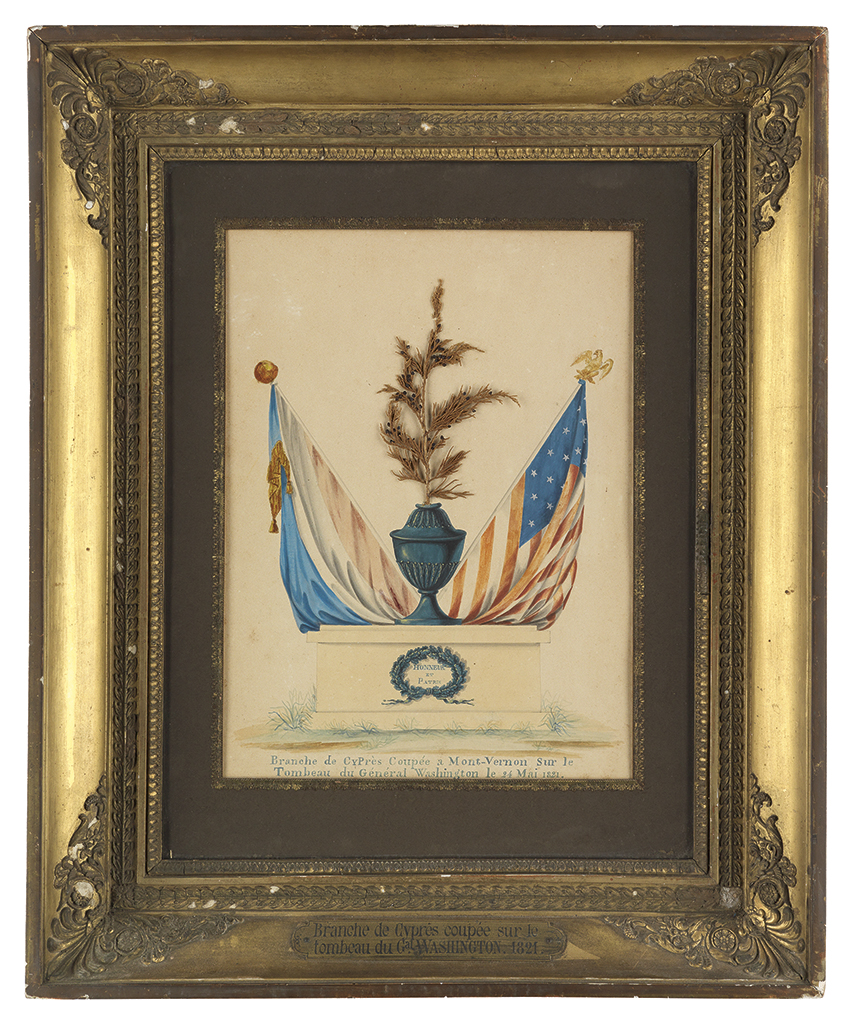