In 1857, Gerat Henry Hollenberg (1823-1874) built a large frontier house in Hanover in northeastern Kansas near the Nebraska line. It soon evolved into a combination grocery store, post office, tavern, and hotel. With the arrival of the Pony Express in April 1860, it became known as the Hollenberg Pony Express Station or Cottonwood Pony Express Station, and then continued serving the Overland Mail Company after the demise of the Pony Express. It remains in its near-original condition today as a state historic site, and one of the few remaining structures from the Pony Express.
This account book was kept by Hollenberg during the station's glory years. Hollenberg was no accountant. The ledger-style entries are generally one customer per page, but are more like free-wheeling memoranda than proper account entries, and even when dated rarely give a year. However, the inside wrapper reads "G.H. Hollenberg, 36 years old," suggesting that the earliest entries date from 1859. The volume is kept in phonetic English, with many of the entries evoking Hollenberg's German heritage--the occasional stray umlaut, or "comenst" for commenced. Most of the entries are for general store sales of flour, tobacco, whiskey and the like, apparently to local German settlers like Hollenberg. Other customers were passing through. "Mr. Butler on Litle Blue" (the nearby Little Blue River) was charged for "4 mules overnight, 3 persons overnight, 6 meals & lodgin, diners on the road." Neighboring towns such as Marysville and Washington are mentioned, as well as Hollenberg's brothers-in-law Ernst Brockmeyer (1844-1914) and Henry Brockmeyer (1834-1912), who seemed to have worked at the station intermittently. One entry was for a man headed west for the Colorado Gold Rush circa 1859-61: "Mr. A.G. Greene, Pike Pick, Denver, for corn and stalling and bord." The Pony Express is not explicitly mentioned, but 4 pages near the end are devoted to the Overland Mail Company, paying for meals and hay for horses. 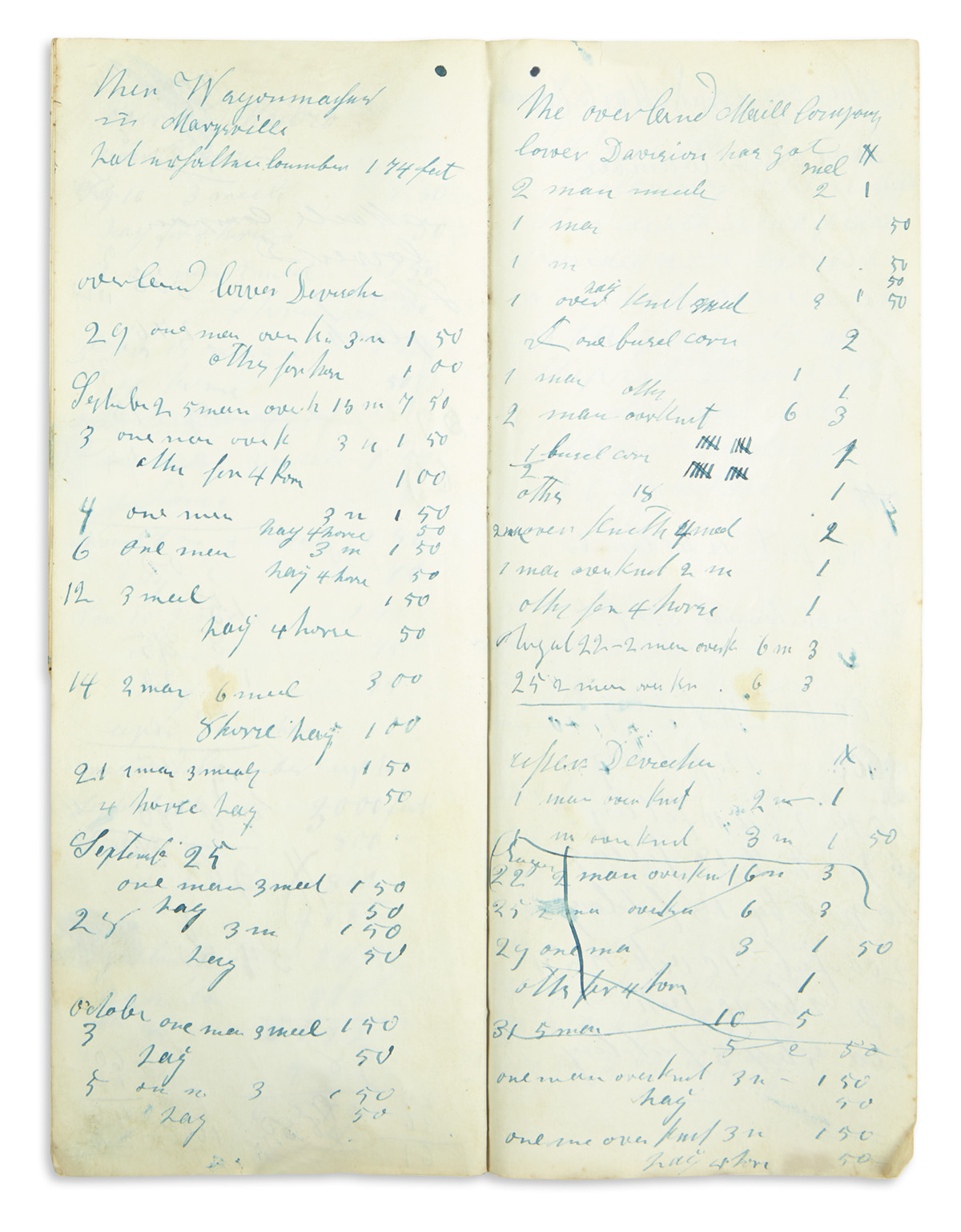