A remarkable and apparently unpublished memoir of an independent frontier woman, one of the earliest settlers of Cody, Wyoming who made her mark as a successful hotel-keeper despite a series of business blunders by her rather feckless husband. Agnes Virginia Brown (1871-1949) was born in Illinois and went west to Peabody, Kansas as a young girl. Her memoir is beautifully written and full of introspective personal detail. It is also a gold mine of local western history, starting with her childhood in rural central Kansas; the acquisition of her town's first piano, bought used and transported via an hours-long cart ride in the rain; and an 1881 visit to her extended family in Champaign, Illinois. She stated frankly "I always wanted to be a boy, and the activities of boys and their jokes and ways have always enchanted me. . . . It was the interesting things men were permitted to do, in contrast with the stupid and circumscribed life of women in that far-off time. . . . This craze for wanting to be a boy lasted until I married and came west and began to carve out my life along somewhat useful lines" (page 9).
Her education was non-traditional; she was semi-attentively home-schooled by her mother, spent a year studying music at Kansas State University, and THEN attended high school and received her degree at age 20. She became an apprentice typesetter at a German-language newspaper in Newton, KS, spending 5 years in the trade during a local depression: "Those first five years in Newton, 1889-1894 were terrible on the spirit beyond description. One could walk down the street and just feel the poverty and drought and hopelessness of it all." In 1897, she spent a year at a commercial college in Wichita, Nebraska, followed by a stint at a newspaper in Woodward, Oklahoma. There she met her husband Mark C. Chamberlin (1864-1922), who had studied a bit of law and dentistry and had not made his mark in either.
The couple relocated to Hartville, Wyoming, where Mark soon reported that "he had done up practically all the dental work there was for fifty miles around and there was nothing to stay here for." They bought a wagon and prepared it for camping out, then set forth "not knowing where we were going or what we would find there. . . . There was no dental law in Wyoming, so we were safe for a while, any way" (leaf 35). After a few itinerant months across Wyoming, stopping in remote Thermopolis, they settled in the primitive frontier settlement of Cody on the northern edge of the state, arriving in 1900 a year before the railroad. The town soon boomed; Agnes set type for the Cody Enterprise, the local newspaper owned by none other than Buffalo Bill Cody; her manager was Buffalo Bill's local agent John Henry Martin. She also accompanied local musicians on piano for dances and theatrical productions. She describes countless dozens of early Cody residents, and hunting trips with her husband in nearby Yellowstone Park in the early days of its establishment. When they inherited a moderate sum, Mark invested in a failing flour mill, failing bank, and failing resort ranch. Finally in 1917 they took advantage of the increasing tourist traffic through Cody and Yellowstone and opened Hotel Chamberlin, a successful operation which remains in business today. The memoir concludes with her embrace of the Christian Science faith from 1919 onward, and finally a 4-page manuscript account of her visit to the Colorado Museum in 1926.
Offered as appendices are typescripts of her diaries: her wagon journey across Wyoming from Hartville to Thermopolis in 1900; her first two trips to Yellowstone in 1902 and 1903. The memoir is titled "A.B.C., Her Book and Heart," and is dated 1936 on the title page, although other sections were written as late as 1939. It is enigmatically dedicated to "P.H.C. to fill in the background of the years before he knew her." The Chamberlains had no children. Laid into the diary is a brief note by Agnes's sister and only surviving close relative Bertha Lindsey Brown Bowen (1874-1959) of Grand Island, Nebraska. Also laid in is an obituary of Agnes, which describes her as the first president of the Buffalo Bill Memorial Association (now the Buffalo Bill Center of the West), and a charter member of the Pioneers of the Cody Country.

With--a large collection of family photographs and other papers which hold considerable interest in their own right. Most notable is an 8 x 9 3/4-inch photograph of the press room of the Cody Enterprise with its editor, foreman, owner Colonel Cody, and its "type sticker" Mrs. A.B. Chamberlain. Cody's face has been considerably retouched in the print, probably for the benefit of his vanity. A 4 1/2 x 6-inch photograph shows Theodore Roosevelt at Yellowstone Park in 1903. The photograph is well-known but generally uncredited; this copy bears a pencil note on verso reading "Taken by Buffalo Jones on T.R. first visit to the Park." The family papers also include a well-used dentist's appointment book from 1914 (very likely Mark Chamberlin's); a partial 1850s letter from evangelist Jesse Maxon of Metropolis City, IL; 35 Real Photo Postcards, many from Wyoming, and two of them depicting Buffalo Bill Cody; 50 other postcards; and approximately 190 other family photos (many depicting Agnes and her immediate family) dating from approximately the 1860s through at least 1946. 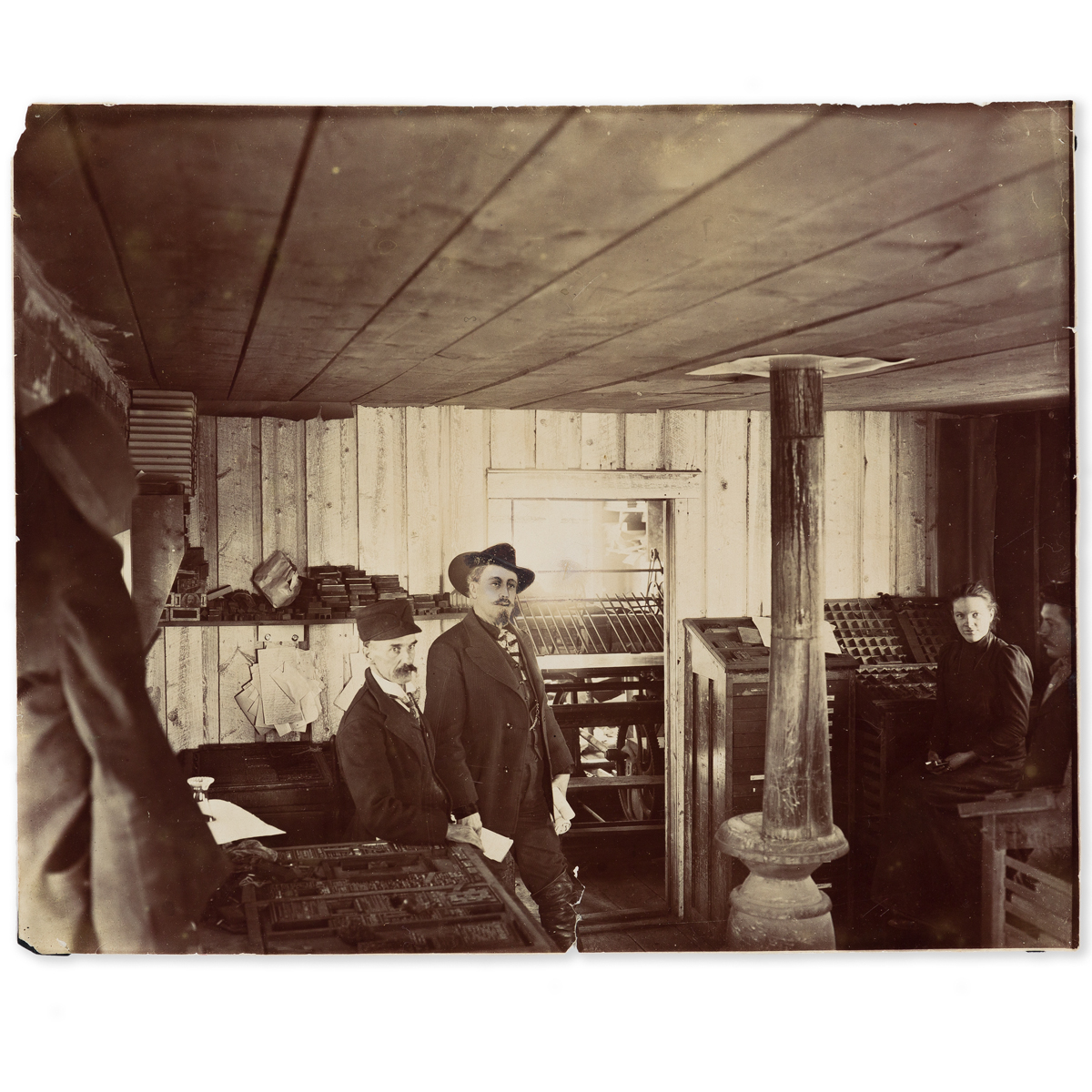 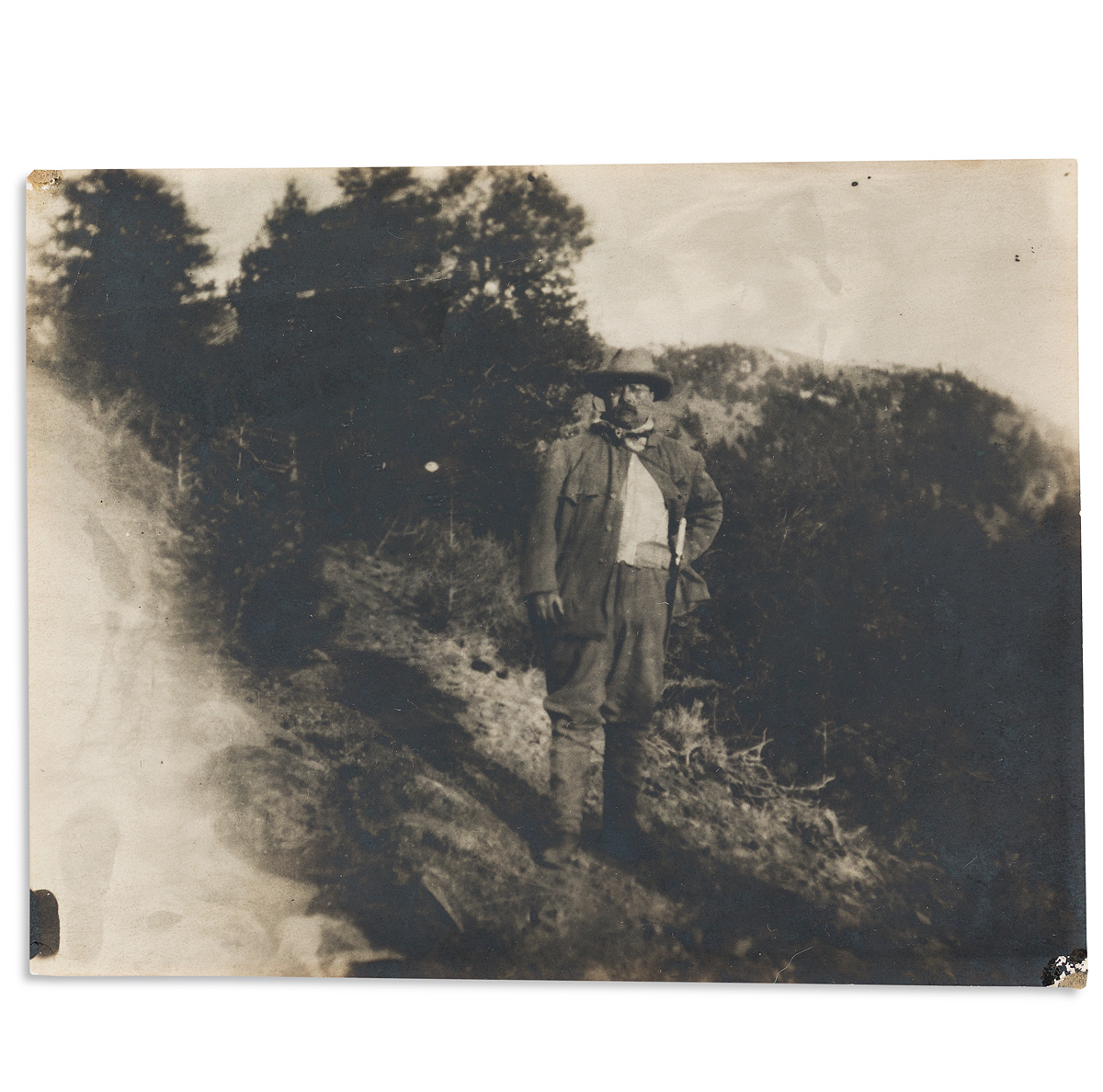