Jenkins A. "John" FitzGerald (1839-1879) served as a surgeon in the Civil War, attended Jefferson College, and then became a career surgeon in the United States Army.
The meat of this lot is in a series of 9 letters written by Dr. Fitzgerald to his wife and mother-in-law from August 1877 to July 1878 while on the frontier in Montana, Idaho and Oregon. A partial letter circa 14 August 1877 describes coming upon the aftermath of the 9 August Battle of the Big Hole in Montana, in which General Gibbon's troops were pinned down by Nez Perce sniper fire for two days: "We found a horrible state of affairs. There were 39 wounded men without surgeons or dressings, and many of them suffering intensely. General Gibbon had not taken any medical officer with him. . . . I think it probable that one, at least, will die. There were no amputations." FitzGerald describes seeing more than 30 Indian bodies, among them acquaintances of his wife's: "Among them think I recognized those two large squaws who sat in the council tent last April at Lapwai, one of whom you questioned about her bead work leggins and who refused to answer you. Also I saw the body of the large Indian who wore that robe trimmed with ermine skins."
The action then moved to the Bannock War in the Blue Mountains of northeastern Oregon, where FitzGerald wrote 7 of the letters in June and July 1878. 3 of the letters include substantial discussion of a Paiute woman, Sarah Winnemucca Hopkins, who served as an intermediary for the troops and later became a popular author. On 15 June he wrote "Sarah Winnemucca, the Indian woman, was sent out 3 days ago (she is the daughter of the old chief of that name). She said she would have her people bring all the Bannocks in as prisoners. She was very sanguine." The next day he reported "The Indian woman Sarah Winnemucca came in last night greatly excited. She says the Bannocks and other hostiles have disarmed the Piutes generally (i.e., her people) and threaten them if they will not join them."
On 8 July he describes a pitched battle: "A scout came galloping in saying the Indians were just ahead of us in force. We went forward at a lope and soon came in sight of quite a number. . . . Then, suddenly, a high hilltop swarmed with Indians and the skirmish fight became very scenic, but the savages gave war . . . and the fight became a running one and passed over about 3 or 4 miles of mountain ground, half of it wooded. They left packs, and dead horses, and live horses all along the way." Somewhat disturbingly, FitzGerald loots their abandoned possessions and brings his wife into complicity: "I got several things for you and the children. I got you a fine beaded squaw robe, so you need not go to the expense of a new dress to go East in." The next day, he reported on some research: "The gorgeous new dress I got for you yesterday belonged to a Piute high society lady--upper ten, according to Sarah Winnemucca, who is still at headquarters. She wanted me to give it to her, but I declined." His final letter also brings his wife into the action. Having taken some captives from among the fleeing Paiutes, a soldier "found a poor little black-eyed Indian baby girl, about 8 or 10 months old, that had been abandoned by its savage mother." FitzGerald made sure that the baby was handed off to a captive woman, and then joked: "Shall I bring it home to you, dear? I confess I have not the remotest idea of such a thing, so rest easy!" These 9 letters were published as part of a 1962 book, "An Army Doctor's Wife on the Frontier: Letters from Alaska and the Far West, 1874-1878," edited by Abe Laufe; a copy of the book is included.
The earlier letters in this collection include 4 written to his future wife Emily McCorkle and her sister Sallie between 10 December 1871 and 27 January 1872 while he served at Fort Harkin and Fort Leavenworth in Kansas; they were married on 15 February. The next 8 were written to Emily (now his wife) while stationed back east at West Point, 23 February to 15 October 1872. They are followed by a lone letter from FitzGerald to his brother-in-law David Brainard Case, written while stationed in Sitka, Alaska: "Some apparently rich quartz (gold) leads have been discovered near Sitka and after visiting them some time in May or June I shall probably invest 2 or 3 hundred dollars" (19 April 1875). The photographs in the album are largely unidentified but seem to mostly depict his wife and children. Also included are 3 cartes-de-visite of Dr. FitzGerald: one as assistant surgeon of the 70th Indiana Infantry taken at Nashville circa 1864, and a pair taken at Fort Leavenworth, KS, probably circa early 1872. They put a face to the author of these action-packed and sometimes chilling letters from the Indian Wars. 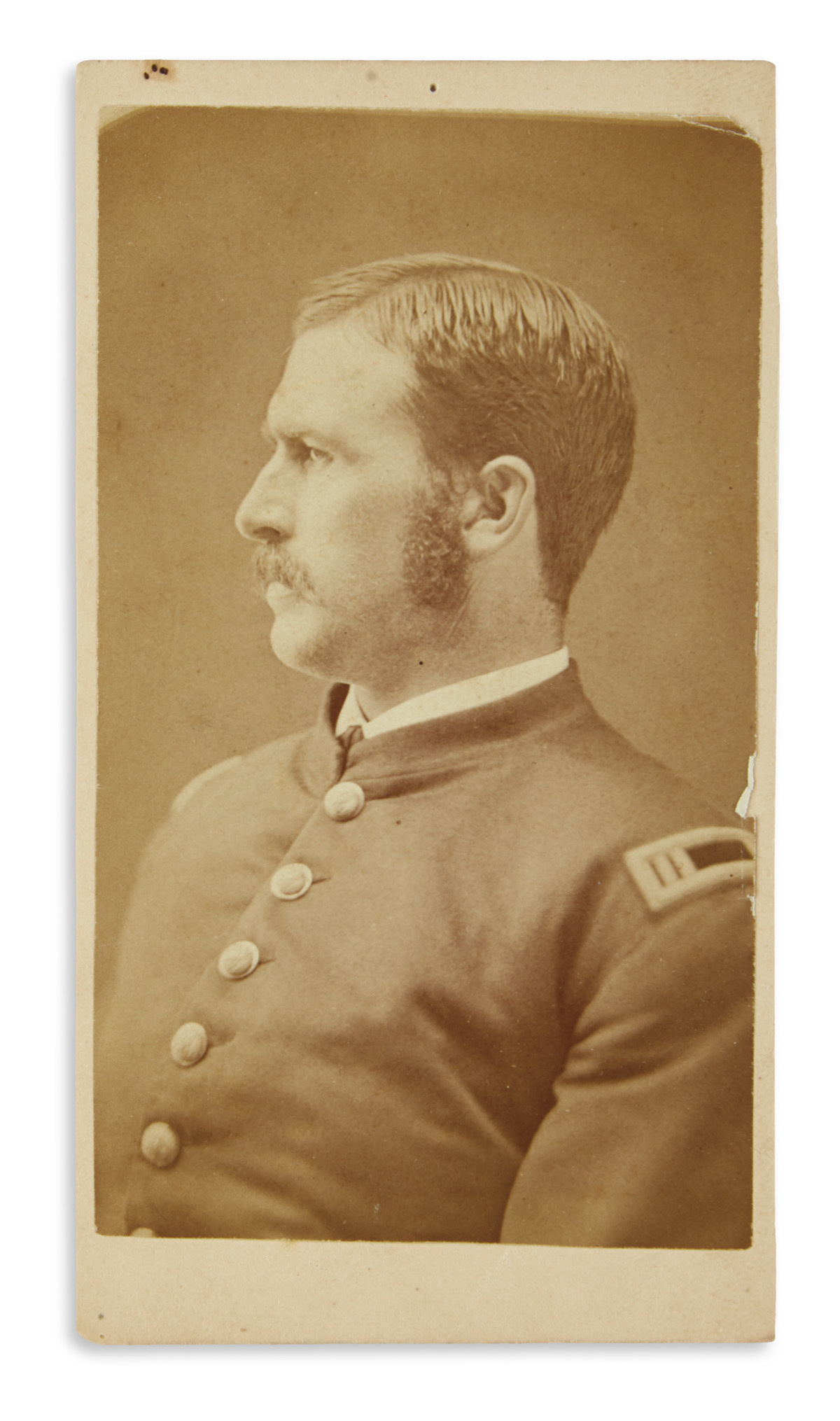