Edgar Zell Steever (1849-1920) was a Pennsylvanian West Point graduate who eventually reached the rank of brigadier general after a long and distinguished career. He wrote these letters in the years after his 1871 first commission, when he became a lieutenant in the 3rd United States Cavalry, a regiment stationed in the Black Hills which fought in several engagements of the Indian Wars. During Steever's first year of service, the regiment's chief scout during part of this period was Buffalo Bill Cody. Cody was already a minor national celebrity, but would not leave the Army to make his stage debut until December 1872.
One of Steever's letters discusses a grueling three-week march across the Nebraska plains to Fort Randall with Buffalo Bill, on 28 June 1872: "We left Fort McPherson on the 5th inst., Major Curtiss, Dr. Flint, Buffalo Bill, Mr. Clifford, 50 enlisted men & myself." The 5-page letter describes their itinerary at length, including a stop at "the place where Capt. Meinhold killed the Indians--the bodies were buried by this time." The party "killed an elk & cooked it naked on the coals & make our breakfast & supper off of that, some hard tack & a few sardines."
The undated partial letter lacks the opening leaf, but includes a long description of an expedition with General Phil Sheridan and guide Henry "Shorty" Zietz: "At lunch, Spotted Tail, his wife & daughter were with us. The chief is quite an intelligent old fellow. He seemed to know how to use all the implements with which society has furnished a table." Steever later visited Spotted Tail in his lodge, described as "constructed of poles, gathered together at the top & secured, the other ends resting upon the circumference of the circle. Canvass is spread over the poles in such a manner as to leave an open space at the top, as an outlet for the smoke. . . . The Indians sat or rather squatted around in a circle, using bedding, buffalo robes &c in place of chairs."
On 2 November 1874, Steever wrote from Camp Robinson, Nebraska: "We are so situated as to be in the right place for action in case of an Indian outbreak, for the Red Cloud agency is about 1 1/2 miles from this post." He had recently gone to the agency "to quell a disturbance among the savages, who became unruly & quite hostile & chopped up a flag pole that was about to be erected at the agency. We made a very narrow escape from total massacre, for there were at least, by actual count, 16 Indians to one of us within 300 yards of where we took our stand." The final letter, from Sidney, NE, 5 December 1874, describes a very late buffalo hunt: "There are several thousands of Indians, those that were lately up at Red Cloud Agency . . . hunting buffalo, both for their meat and their hides. This is the last year that some of them can come south, for according to their treaty stipulations, they have agreed to give up the buffalo hunt, as the government has promised to feed them. . . . The time most probable for Indian depredations will be when they go back, for the young men will purposely lag behind in order to get a good opportunity to steal stock, kill their Indian enemies or some of the white settlers." A great group of letters from an officer in the Indian Wars, all written in or near Nebraska Territory and full of detail on the Indians, buffalo, and frontier hardships. 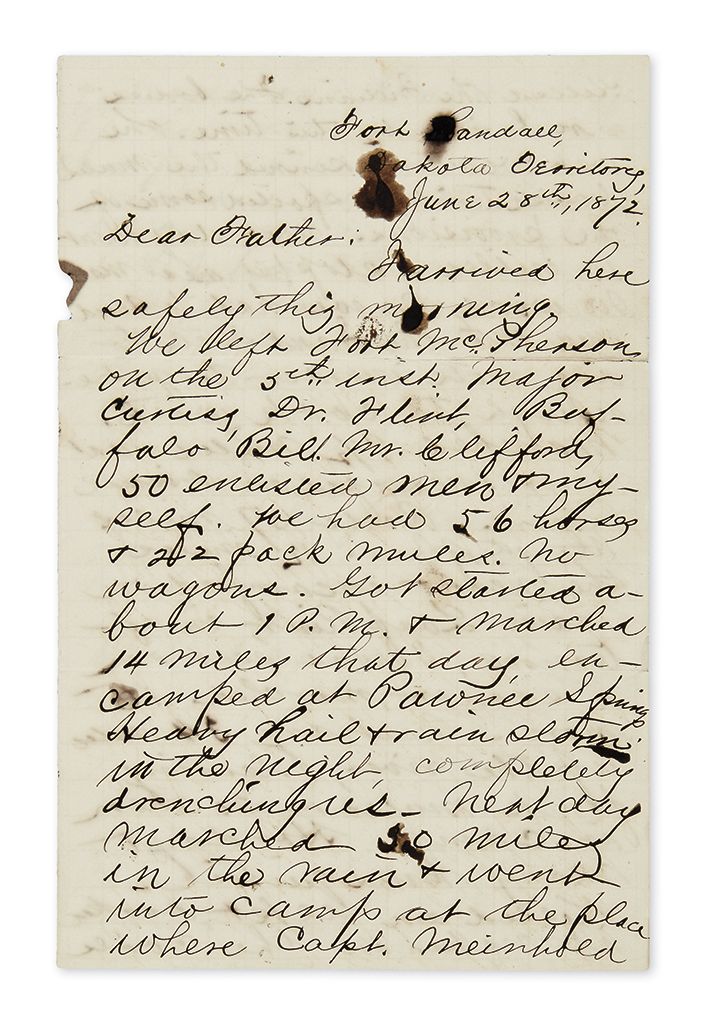