Price Realized: $ 13,000
Price Realized: $ 16,250
?Final Price Realized includes Buyer’s Premium added to Hammer Price
Estimate: $ 15,000 - $ 25,000
(WEST.) William Sydney Porter, a.k.a. "O. Henry." Illustrations for a lost mining memoir, drawn long before his fame as an author. 27 drawings laid into one binder: pencil, ink and wash on paper, 21 of them on similar sheets of sturdy paper about 7 x 5 1/2 inches with only minimal wear, 6 possibly unrelated sketches on slightly larger sheets of thin tracing paper with substantial edge wear, and one cartoon from a probably unrelated project on a sheet of lined paper, 8 3/4 x 5 1/4 inches. With 2 photographs, 4 letters, and related clippings. [Austin, TX, circa 1883-84]
Set Alert for Similar Items

William Sydney Porter (1862-1910), best known to posterity as the author O. Henry, was raised in North Carolina, and went west to Texas as a young man in 1882. After a stint on a sheep ranch, he settled in Austin, TX, where he worked various odd jobs while exploring his interest in writing and drawing. The drawings offered here were his first professional commission, when he was about 21 years old.

The drawings were done to illustrate the frontier mining memoir of Joseph T. Dixon (circa 1844-1929), an eccentric character almost universally known as "Uncle Joe." Dixon had spent several years prospecting in the Rocky Mountains, and was brought to Austin, TX by a friend named John Maddox to set his colorful memories to paper, to be titled "Carbonate Days." Young Porter was brought on to illustrate the project, working directly with Dixon for about three weeks while they shared a small cabin on Maddox's property. After Dixon spent about six months writing at Maddox's home, arrangements were made to send him to New York to secure a publishing deal. The night before his departure, in a fit of insecurity, Dixon tore the manuscript into small pieces and threw it into the creek. Fortunately, Porter's illustrations had been given to Maddox for safe-keeping.

The illustrations are almost all captioned in manuscript, and appear well-suited for a lively Wild West narrative, filled with adventure and comic overtones. A man being startled awake by a room full of mules is titled "Early Visitors." Several show street scenes in rough-edged mining towns, and two show attempts to buck a burro, while one recalcitrant mule is captioned "Don't wish to go prospecting." A young woman is captioned "the Señorita of the Cañada." A claim jumper with a gun to his head is titled "The jumper taken by surprise." Several of the captions suggest specific locations, all in New Mexico: "Cañon Pino"; the head of the Pecos River; Herlow's Hotel in Santa Fe; the Atchison, Topeka and Santa Fe Railway at Apache Cañon; the head of the Rio Grande; and a Santa Fe street scene. Dixon's later biographical accounts note time in Colorado or "the Rockies" generally. A 1917 profile called him a former "miner and prospector in the Rockies from British Columbia to the Mexican Sierras" who participated in the Leadville, CO gold rush. These drawings only hint at the stories Dixon told the young Porter in 1884.

With the destruction of the manuscript, the drawings now had no practical purpose, but they were not immediately discarded. Porter gave them to a local girl named Pauline Haynie, who kept them as a memento. Porter did not adopt the pseudonym O. Henry until 1899 and did not achieve success as an author until 1902, with his early efforts as an illustrator by that point in the far distant rear-view mirror.

These drawings surfaced in 1912 when 3 items were published in "Rolling Stones," the twelfth and final volume of O. Henry's collected works. The "Emigrants' Camp" drawing is reproduced facing page 29, "Early Visitors" (published as "Morning Visitors") facing page 49, and "Zeke Sells the Basket of Toads to the Bloated Bondholder (Herlow's Hotel)" facing page 249. So far as we know, the remainder remain unpublished.

The drawings are accompanied by two photographs: a small worn tintype, 2 3/4 x 2 inches, of two men said to be young Porter with his friend Wilcox circa 1884 or 1885; and a well-preserved cabinet card portrait of Porter, 6 1/2 x 4 inches including mount, with the backmark of Hamilton Briscoe Hillyer of 916 Congress Avenue, Austin, TX. Hillyer was at this address from about 1881 to 1887. Also included are 4 letters and related clippings of later owner John Hagelstein, 1925-39. 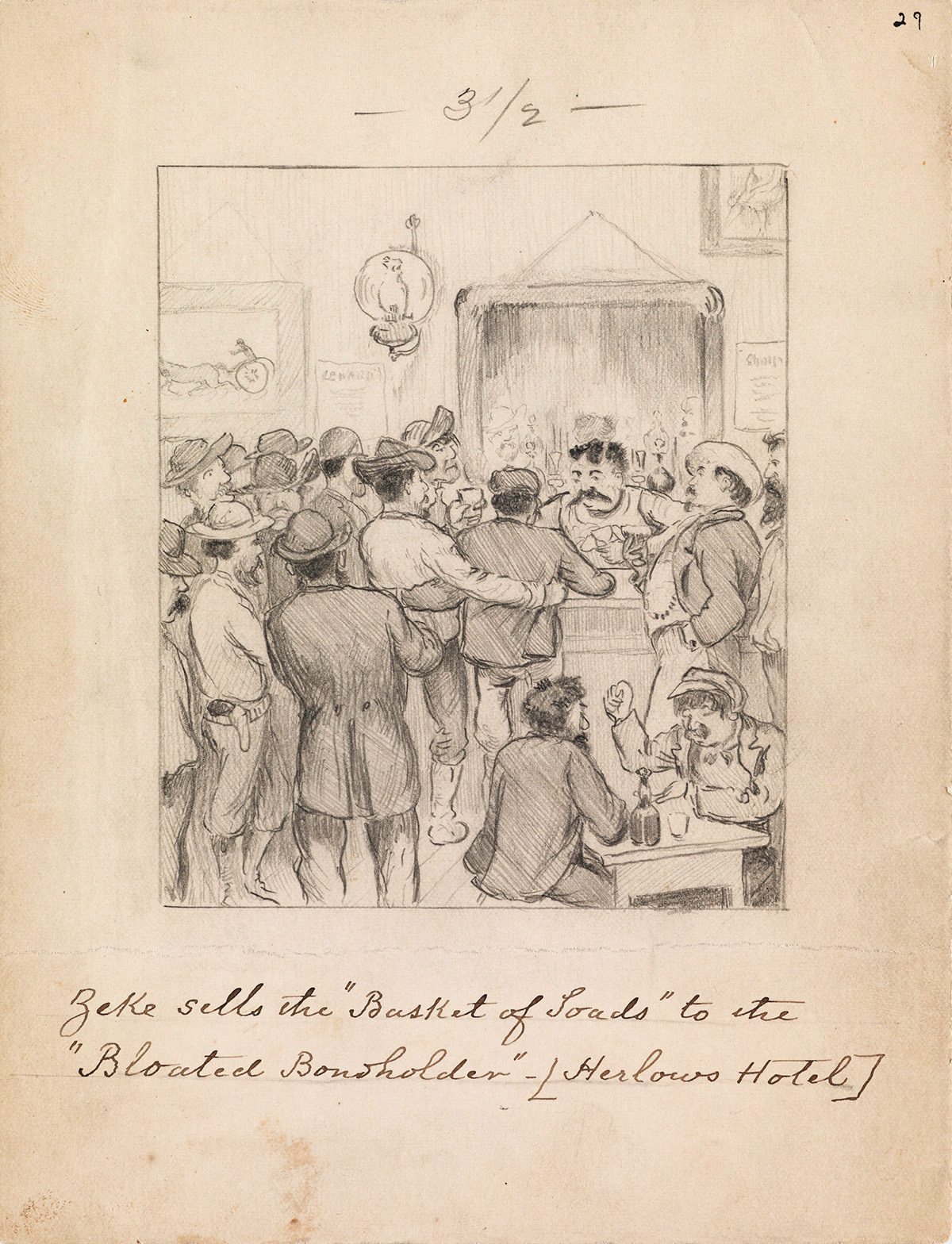 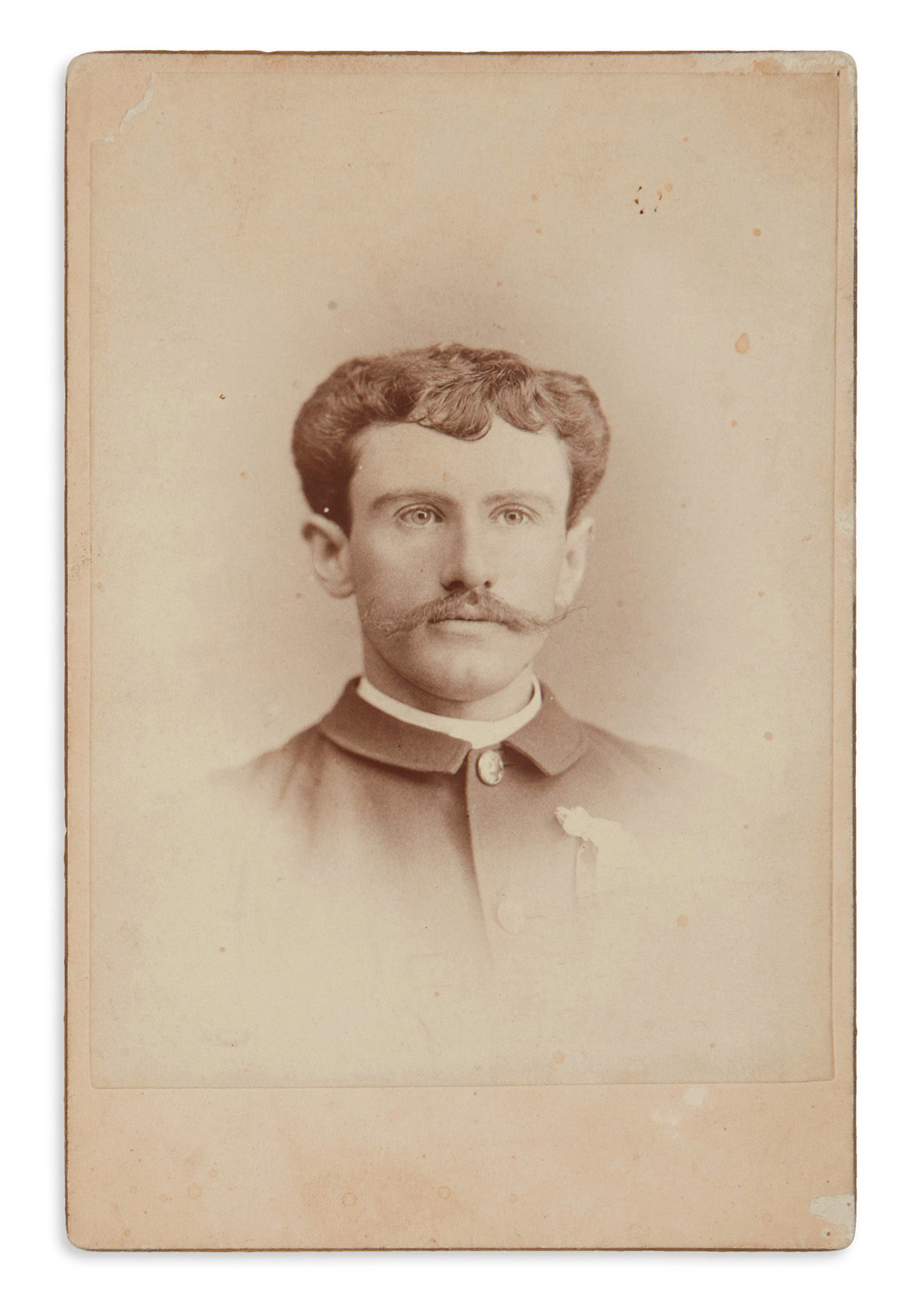