Maclyn Arbuckle (1866-1931) was a popular stage actor in the 1890s who made a successful transition into film during the silent era. Born in San Antonio, TX, he remained associated with the state throughout his life, and his San Antonio Moving Pictures Corporation produced four films in 1922. He succeeded in both comic and dramatic roles. His cousin Roscoe, who performed as Fatty Arbuckle (1887-1933), went on to even greater success as a comic actor.

Offered here is a large archive of Maclyn Arbuckle's diaries, publicity photographs, theatrical manuscripts, correspondence, clippings, and other ephemera. The 16 manuscript diaries are in worn quarto notebooks, non-continuous but covering most of the period from 1882 to 1895. The earliest 4 volumes start with time in boarding school in West Newton, MA and Plymouth, NH, continuing through time as a young adult in Texas. His July to December 1887 diary is written as he pursues a law career in Texarkana, TX. He celebrates his 21st birthday on 9 July: "Tomorrow I begin in earnest as a man with determination to make a bright future for myself." Two days later he writes: "My business is picking up a little & I am gradually becoming reconciled to the fate of the young lawyer." On 16 July he was recruited for a baseball game, playing first base for the "Texas Side" against a nine from across the border in Arkansas. He frequently attended the theater, being moved to tears by an Effie Ellsler performance on 3 December 1887.

After that point, the diaries from 1891 to 1895 are written mostly while on tour as an actor. Perhaps the most interesting is his diary from August to October 1891, which begins as his theatrical career gets off the ground in Dallas. On 2 August he describes the opening night of his staging of "Ingomar the Barbarian": "When the curtain went down on the last act, I was proud of my little 'professional' company--not one had made the slightest error." Soon after, he goes on the road as a supporting player in another troupe, visiting a lunatic asylum in Lexington, KY (21 August) and bailing out three of his colleagues from a Maysville, KY prison on 7 September: "They will remember Maysville several years from now. It was quite a scandal in town." The tour brought him back to Taylor, TX on 19 October: "I am always very glad to enter the state as I meet my old friends in every town."

His parents faced bankruptcy and the loss of their home in 1893. From the road in Fort Wayne, IN, Arbuckle wrote "I am doing all I can to aid. I live in the cheap hotels, do not drink or indulge in any extra expense but send all home. . . . Must hold up and fight it out." The diaries nonetheless include some of the hijinks you might expect from a renowned comic actor. Backstage in Rochester, NY on 23 January 1895, "I caused quite a consternation in the orchestra, who were playing behind the scenes. . . . As I left the stage . . . I walked into the sawdust used for the horses & suddenly began doing handsprings in rapid succession. As I was made up to look 60 years old, the consternation which followed almost caused the orchestra to cease playing."

The approximately 200 photographs are mostly publicity images from Arbuckle's film career circa 1914-1922, approximately 8 x 10 inches, mounted on either side of detached scrapbook leaves, and generally well captioned. Well-represented films include "The County Chairman" (1914), "The Reform Candidate" (1915), "Fighting Mad" (1919) and--from the San Antonio Moving Pictures Company--"Mr. Bingle," "Mr. Potter of Texas," and "Squire Phin." A posed image from 1920 shows Arbuckle and his staff on the steps in front of his film company's offices. Others appear to be slightly earlier, from theatrical productions such as "The Circus Gent" and "The Welcher." One undated image shows Arbuckle and 6 others--including a blurry Jack London--performing in the Bohemian Club's "Jinks." An early formal portrait is captioned on verso "1888, lawyer & candidate for Justice of Peace at Texarkana." The largest item is a cast photo of "Why Smith Left Home," 11 1/2 x 16 1/4 inches, signed on mount by several cast members including Arbuckle, mount quite worn and chipped with loss of some signatures, 17 August 1898.

3 scripts are credited to Arbuckle: "The Reform Candidate," "His Own Medicine," and "Shylock Before the Court of Appeals," as well as his copies of 7 scripts credited to others, most notably "Gentleman from Texas" and "Mr. Potter of Texas."

A thick file of manuscripts includes essays including "Animal Communications," transcripts of reviews, a series of treatments for a proposed series of one-reel playlets written with noted humorist Irvin Cobb called "Mr. Blunder," an 1897 song titled "The Sad Sound of the Mint Julep"; and Maclyn's speech on his father.

Other highlights include a playbill from his 1891 Dallas production of "Ingomar" featuring a "company of excellent local talent," his running restaurant and cigar tab at a club called "The Lambs," 1920; and a pencil sketch of his house and garden.

Finally, what would an actor from this era be without his clippings? Two very thick folders of his clippings are included.

Also included are a few letters and documents relating to father James Graeme Arbuckle, a Dallas merchant who worked extensively with Latin America, including a certificate issued to as a Caballero of the Order of Isabella the Catholic, signed "Yo el Rey" for King Alonso XIII of Spain, 19 1/4 x 23 inches, 1912 (mounted on board); 4 letters regarding his defense of the flag of Texas, 1907; a large worn manuscript map of Oaxaca on tracing paper; and his typescript lecture "Adventures in Mexico in the Sixties." 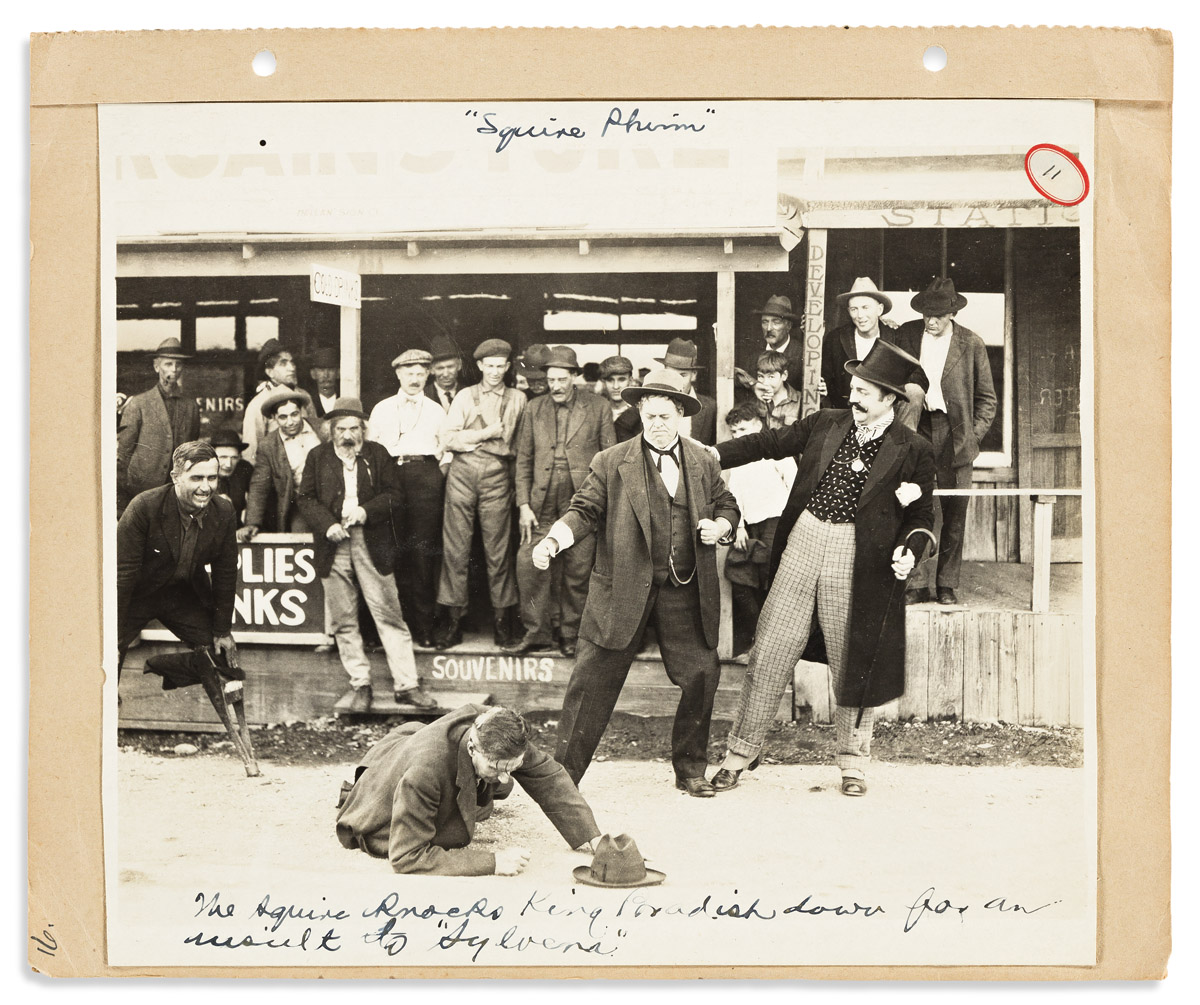