Price Realized: $ 5,200
Price Realized: $ 6,500
?Final Price Realized includes Buyer’s Premium added to Hammer Price
Estimate: $ 10,000 - $ 15,000
(WOMEN.) Pair of slippers said to be made by Elizabeth Keckley for cabinet member Gideon Welles at the time of Lincoln's second inauguration. Pair of crocheted men's silk yarn boudoir slippers in a red, white and blue patriotic pattern sewn to leather soles, the soles being 10 1/4 inches long and 3 inches wide; light fading and soiling, half-inch areas of wear at the back of each slipper, but generally well-preserved. [Washington, March 1865]
Set Alert for Similar Items

Elizabeth Keckley (1818-1907) was perhaps the leading seamstress in mid-19th century Washington. She was born into slavery in Virginia, and was able to buy her own freedom in 1855. She arrived in Washington in 1860 and very quickly developed a brilliant reputation; she was best known as dressmaker and confidante to the president's wife Mary Todd Lincoln. Her other prominent customers included Mary Jane Hale Welles, the wife of Lincoln's Secretary of the Navy, Gideon Welles.
The slippers offered here were consigned by a great-great-grandson of Gideon Welles. According to family lore, they were created by Elizabeth Keckley for Gideon on the occasion of Lincoln's 4 March 1865 second inauguration. While they are not signed and cannot be definitively attributed to Keckley, several pieces of historical evidence support the family's assertion. Keckley did some work for Mary Jane Welles in the summer of 1861. Keckley's best customer Mary Todd Lincoln regarded Mrs. Welles as her only close friend among the wives of Washington politicians. Keckley was actively involved in the 1865 inauguration, sewing a white silk dress for Mrs. Lincoln and helping her wear it; she attended the special "colored" reception and congratulated President Lincoln personally. After Lincoln's April 1865 assassination, Keckley and Welles were the grieving widow's primary support network. In short, Keckley had a long relationship with the Welles family by the time of the second inauguration. See Jennifer Fleischner's book "Mrs. Lincoln and Mrs. Keckley," pages 222, 259, 271, 279-280, 286, and 288.
The slippers are clearly of the appropriate style and period. Lynne Zacek Bassett, an independent scholar specializing in historic costumes and textiles, notes that this was "common shape of men's boudoir slippers from the 1850s to the 1870s," similar in design to other examples held by the Metropolitan Museum of Art and other institutions. Miss Lambert's Hand-Book of Needlework, a popular work which first appeared in 1842 and went through numerous editions, gives directions for a crocheted slipper with red and white stripes. Bassett's report is available by request.
The slippers are accompanied by other Gideon Welles family papers and photographs which don't mention the slippers specifically, but help establish the Welles family provenance: a cabinet card portrait of Mary Jane Hale Welles in a funeral dress, said to be sewn and designed by Keckley for the funeral of her son Hubert Gideon Welles in 1862, and again worn at Lincoln's funeral in 1865, on a Henry Ulke mount from 1866 Carte-de-visite photograph of a boy said to be Hubert Gideon Welles (1853-1862), on an Ulke mount from 1865 Cabinet card photograph of Gideon Welles on a Mathew Brady mount Autograph Letter Signed from Mary Jane Hale Welles ("M.J.W.") to Gideon, 15 August [1863] and finally, an Autograph Letter Signed from Secretary Gideon Welles to his son Thomas, discussing the second inaugural: "The inauguration passed off pleasantly and well. There was a great crowd, exceeding any previous one I have ever witnessed at an inauguration," 5 March 1865. The lot is also accompanied by a signed statement by the consignor. 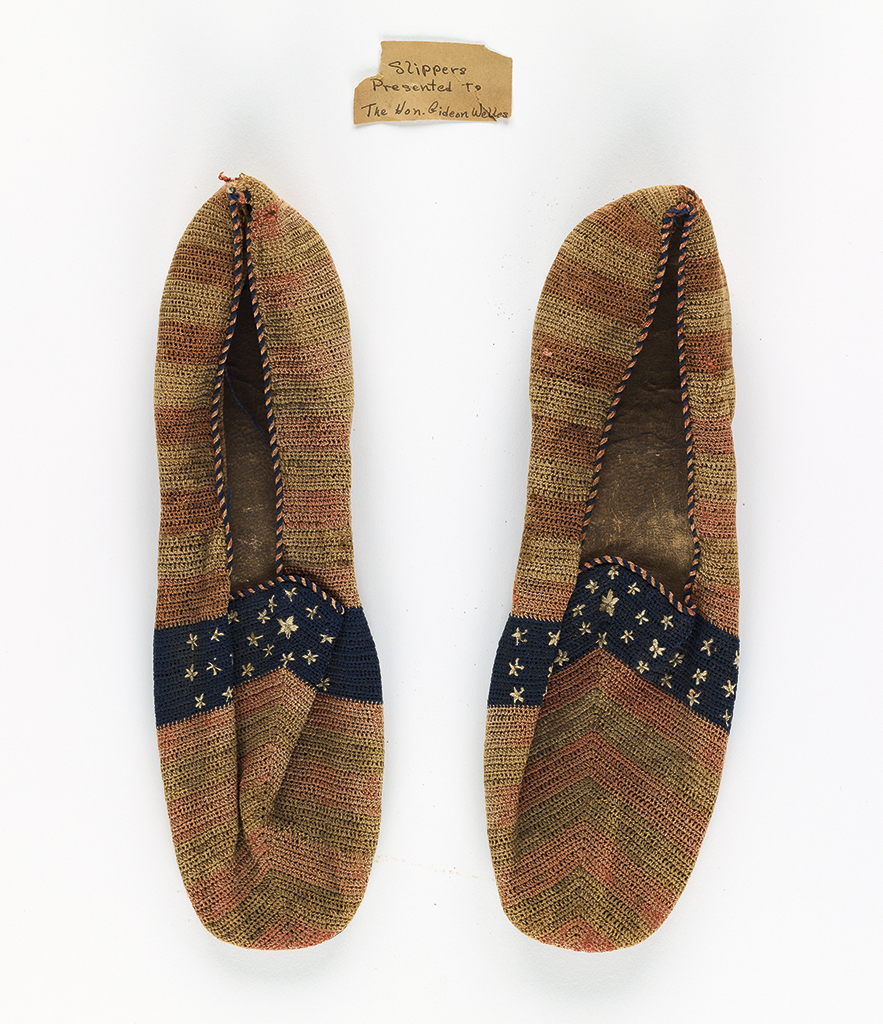