The flight logs, each on a "Navigator's Log" form printed by the AAF with spaces for various information including takeoff and landing times, and a table of columns for recording flight information including position, time, course, altitude, air speed, etc. One log records the flight of "Plane No. 292" [Enola Gay, serial no. 44-86292] on July 1, 1946, from Kwajalein at 7:50 UTC, arriving at Honolulu at 18:11 UTC; another dated May 11 and two undated logs each record a flight from Kwajalein to Bikini Atoll and back. Each 4 or 8 pages, oblong 4to, each a sheet folded once to form 4 pages or twice to form 8. Vp, 1946.
The aeronautical charts, each marked "Restricted" or "Confidential," for plotting courses in the Pacific Ocean or showing radio towers and restricted airspace in various areas of the U.S. including Estacado Plain, NM; Great Salt Lake, UT; San Francisco Bay, CA; St. Johns River, FL; Chesapeake Bay, DE; Wichita Mountains, TX; and elsewhere. Each 30x40 inches or smaller.
The weather forecasts, each undated, one for flight between Kwajalein and Bikini, written and signed by forecaster K.C. Winslow, in blue and green pencil, on verso of 1944 aeronautical chart; the other, for flight between Kwajalein and Hickam Air Force Base in Hawaii, written by forecaster Kauper, in blue and red pencil, on AAF Weather Service Flight Forecast form. Each 11x20 1/2 or 11x17 inches.
The remaining items: copy of a typed notice printed on a "Confidential Notice to Airmen" form dated June 29, 1946, concerning status of various direction-finding stations, areas to avoid due to danger of anti-aircraft fire, etc. 1 page, 4to • Combined Aircraft Weather Report Code form, unaccomplished. 16x21 inches • Weather Flight Folder, Signed and Inscribed on front cover: "Dutch Van Kirk / Navigator -- Enola Gay / 6 Aug 1945," in pencil. Attached to rear cover is an unaccomplished weather report form. Folio, folded sheet.
After dropping its payload on Hiroshima on August 6, 1945 and serving as weather plane for Bockscar's flight to Nagasaki three days later, the B-29 bomber Enola Gay flew on April 29, 1946 to Kwajalein Island in order to take part in Operation Crossroads during which a Mark III nuclear bomb was dropped on Bikini Atoll to test its power on marine vessels. Although the Enola Gay was initially expected to make the drop after a competition was held to find the ideal crew, command announced that the drop would be made by Woodrow Swancutt's crew in another B-29, Dave's Dream. Feeling snubbed, commander Paul W. Tibbets, navigator Theodore J. Van Kirk, and the rest of the Enola Gay crew remained at Kwajalein as consultants. On the day of the drop, Tibbets and Van Kirk reviewed weather reports and noted that the calculations produced by the crew of Dave's Dream would result in the bomb missing its target by over 1,000 feet, which information they offered to the Dave's Dream crew. Tibbets's advice was ignored, and when the bomb was dropped on June 30 at 21:00 UTC, it missed the target, just as Tibbets and Van Kirk anticipated. One of the logs in the present lot dated July 1 records Enola Gay's flight from Kwajalein to Honolulu the following morning. On July 24, the Enola Gay was flown to Davis-Monthan Army Airfield in AZ, where it was put into storage.
Provenance: Theodore J. Van Kirk; thence by gift to present owner. 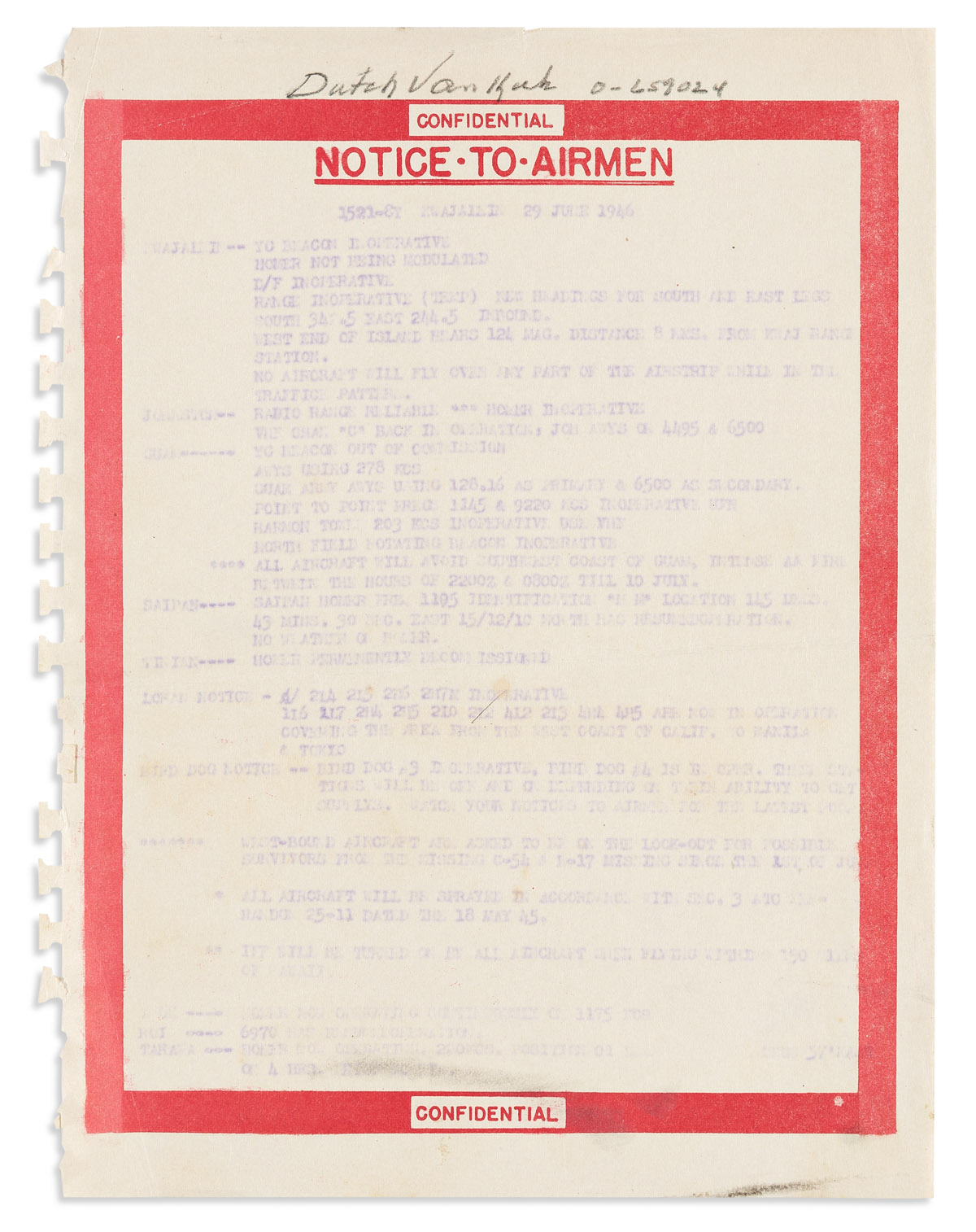