Harold Harley Webster (1895-1924) of Lisbon, ND was a musician with the band of the North Dakota National Guard, which was activated for World War One as the 164th Infantry Regiment. The one time Webster mentions his instrument was his favorite Martin "B-flat bass" on 9 June 1918; we infer that he was a bass clarinet player. His wartime experience was quite different than the soldiers out in the trenches. He was apparently never very close to the front, but did his part to boost morale with almost daily concerts at bases throughout France for a wide variety of military and civilian audiences.

Before the period of this diary, Webster's guard unit had already been activated for duty on the Mexican border, and then was reactivated for World War One shortly after their return. This diary begins with his departure from a Valley City, ND training camp, followed by two months in camps in North Carolina, Long Island, and New Jersey. On 14 December 1917, they departed for Europe on a massive captured German transport ship. The mood was tense approaching Europe: "No one allowed to undress tonight. Gun crews on full force. 12 men to a gun & they have to sleep on deck now, beside the gun" (21 December).

The band was based mostly at two camps in France, first in Gondrecourt and later at Langres. However, from those bases they travelled far and wide to other military camps, often sharing a bill with other performers. On 8 February they shared the stage with the noted Shakespearean actor Edward Hugh Sothern. Webster often recorded the pieces performed, ranging from patriotic pieces (American, English and French), classical music, popular songs, backing for minstrel shows, and on several occasions jazz. On 21 October 1918 the band even staged a comedy of their own creation: "Over to Turrenne Y and put on our show, 'Fun in a Band Room,' a 3 act comedy. It sure went fine. Got a good comp[liment] from the Y man." In the rear of the volume is a 3-page list of "Our repertoire of big concert numbers," as well as a group photo of the band (illustrated) and 4 other photographs.

The realities of war were not far away; funerals and hospital visits were a part of his regular routine. Though he noted at Gondrecourt that "we are 25 or 30 miles from the trenches" (14 February), the next day he wrote "Woke up at 3 a.m. and sure could hear heavy bombardment at the front." He went through gas mask training on 20 March 1918. The band was apparently affected during the relatively mild first wave of the Spanish Flu from 21 to 27 May: "Gewalt went to hosp. with high fever. . . . The band all have the grippe. . . . Nothing doing all day for nearly all have the grippe." During the more deadly second wave, he mentions it but once, on 27 October 1918: "Nice day, but no playing because of the Spanish Flu epidemic."

Webster and his bandmates also found time for the occasional amusement. On 11 March 1918 he bummed a joyride with a military pilot for his first airplane ride: "We were up in the air over 20 minutes, and at an altitude of over or between 1800 & 2000 feet." He participated in several baseball games (described at most length on 4 May 1918). From 25 July to 3 August he and some friends enjoyed a week's leave at the mountain lakeside resort town of Aix-les-Bains, where they enjoyed music and café life: "Heard part of band concert by N.H. band--sure is a punk band . . . Met a man & his wife (Americans) who took us into a cafe at Grand Port & bot us some champagne & Gewalt played some jazz. I danced some with the Madame, a young woman & wonderful dancer." He concludes this section with an amusing summary with cast of characters in yearbook form, including the local women they cavorted with. The most joyous passages describe the news of peace on 12 November 1918: "Hiked down town & played a parade to Hotel de Ville. Some wild crowd. Played 2 hour concert & then back to camp. . . . Some wild mob on the streets tonight, everybody happy & doing lots of yelling, laughing & celebrating in all ways."

With--6 pins and medals from his 1916 service on the Mexican border with the North Dakota National Guard, and his printed folding map of France. 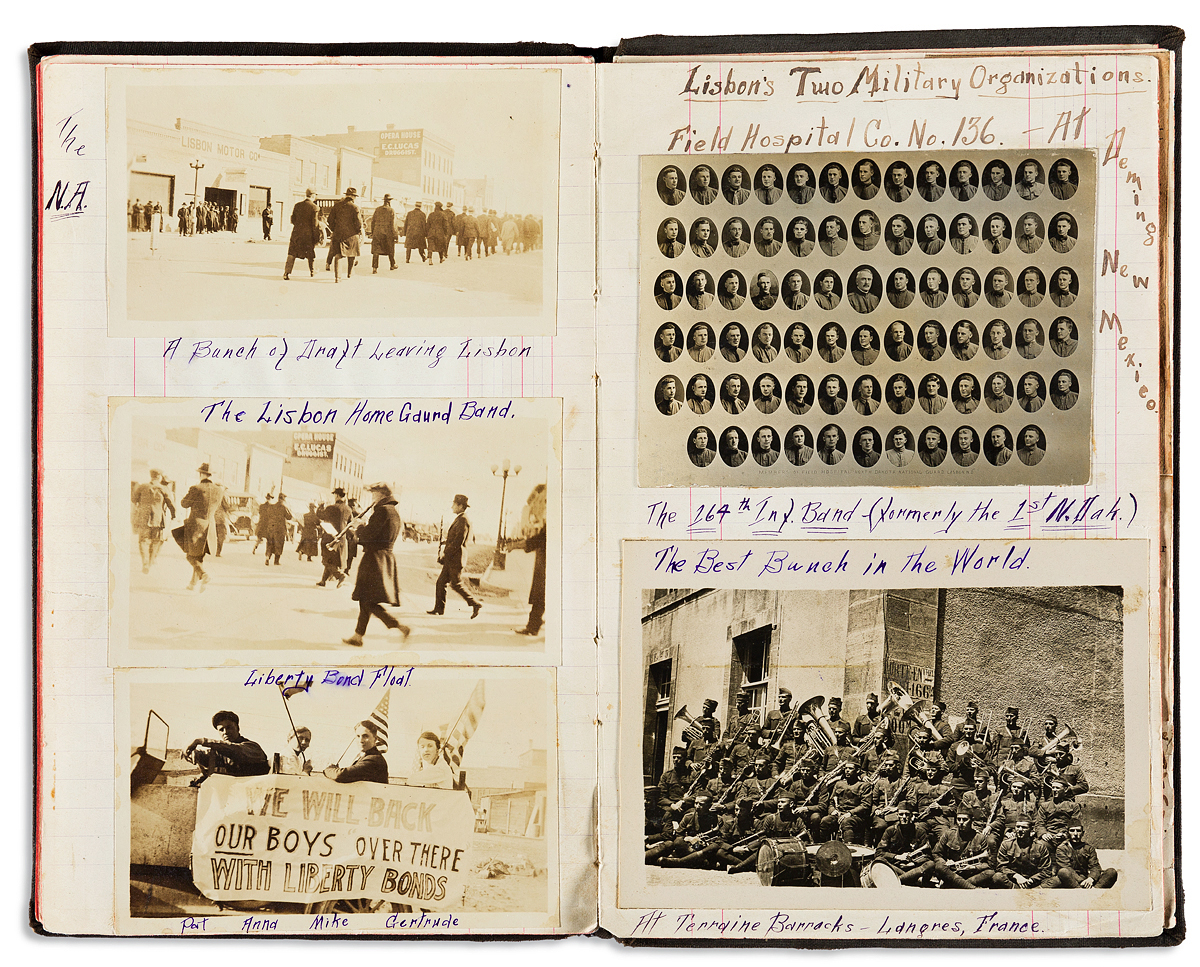