James Beebee Brinsmade Jr. (1824-1884) was raised in Manhattan. After high school, he taught in a private school before entering Yale University as a junior in November 1843. This two-volume diary begins with his arrival at Yale, and shows him entering with full enthusiasm into campus life. Campus political battles are described here with great relish, as well as prayer meetings, rowdy hijinks, and country excursions. Before his two years are up, Brinsmade has joined the secret Scroll & Key society, been named president of the Linonian Society, and was nearly voted class orator.
Brinsmade's roommate and cousin was Henry Beebee Carrington (1824-1912), who later served as a general in the Civil War. The Class of 1845 also included future Supreme Court justice William B. Woods and Chicago mayor Carter Henry Harrison, both frequently mentioned here. Brinsmade also frequently attends sermons by the famed New Haven abolitionist Leonard Bacon, and describes the funeral of the artist John Trumbull.
Yale's intercollegiate baseball team was not formed until 1872, but Brinsmade launched an intramural club three decades earlier: "Walking up with Redfield I proposed that we should get up a base ball club in our class. He entered into it finely and went right off and got the bats & ball made and this afternoon we had a glorious game on the green near the Methodist Church. Came in almost worn out, very lame" (14 November 1844). This is the first known instance of baseball being played at Yale. He plays baseball at least three more times, in addition to several games of football and wicket (a cricket cousin).
Brinsmade was not averse to violence when he felt it appropriate, particularly when local New Haven toughs were involved. On 5 July 1844, a friend who was annoyed by a local beggar locked the unfortunate up in a coal-closet. He then gathered a group of classmates who pretended to be medical students preparing to butcher the captive. Finally, when the joke grew old, they gave the terrified man "3 or 4 hearty kicks" and threw him out the door. Brinsmade called this chilling incident "the finest fun we've had for some time." On 26 December 1844, he described a series of clashes between his classmates and the local Irish "town-tackies," and concludes, "The general feeling seems to be that we must have a general set-too to teach the tackies manners. . . . If the law won't help us, why we must ourselves."
The regular entries end on 31 August 1845, but continue sporadically for another seven years as Brinsmade pursues a career in law in Pompey and Albany, NY. On 9 January 1849, he meets the vice-president-elect: "I had not the pleasure of the acquaintance of Millard Fillmore till this evening. I found him a plain, courteous gentleman (by the way a finer looking man I never saw). He is exceedingly sociable, and though the parlor was full of company I had a very pleasant call." a lively and otherwise unknown account of life at yale. 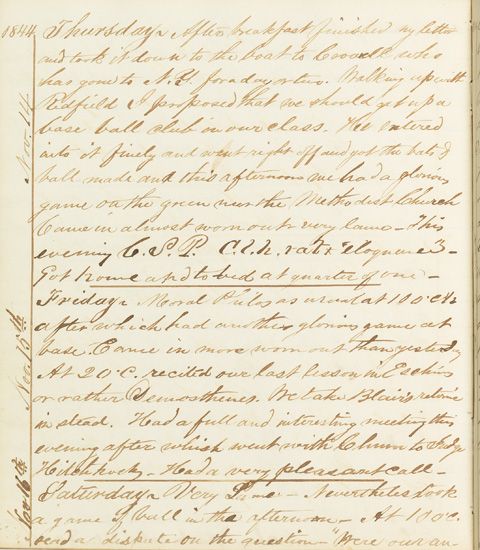