Rhode Island was the lottery capital of early America despite its small size, authorizing almost half of the lotteries which took place among the 13 colonies, and almost 250 lotteries through 1842, when the launch of new lotteries was banned by the state constitution. Lotteries were granted for various charitable purposes, and greatly aided the development of Rhode Island's infrastructure, churches, and schools in lieu of taxes. By 1800, the grantees would often contract out the work of running the lottery to a specialized management firm which printed tickets, placed advertisements, and distributed prizes. This collection includes:

77 lottery tickets from across Rhode Island, 1752-1842. Each is signed by a manager, gives a ticket number in manuscript, and states the beneficiary or authorizing act; some have the purchaser's signature on verso. The earliest is for the 1752 Newport Street Lottery. 10 others are from the colonial period, including Providence street and meeting house lotteries, the "Furnace-Unity Bridge Lottery," "Glocester Road Lottery," "King Street Lottery," and "Pawtuxet Baptist Parsonage Lottery." One ticket for "disposing of the Real Estate of George H. Peckham" was authorized during the Revolution, in 1782. 3 uncut sheets of two or more tickets are included. Later tickets benefitted the Providence Episcopal Church (1785), the Providence Great Bridge (1790), Pier Wharf in South Kingstown (1791), the Cumberland Meeting House (1795), Smithfield and Cumberland Bridge (1795), Beneficent Congregational Meeting House (1796), Rhode Island College a.k.a. Brown University (1797), Barrington Meeting House (1798), Bristol Church (1801), Washington & Coventry Meeting House (1808), Providence and Worcester Road (1825), Washington Canal (1826), Washington Lodge for construction of a Masonic Hall in Wickford (1826), Buck Hill Road (1826), Blackstone River Bridge (1826), the Rhode Island School Fund, and many more. Some are signed by leading merchants such as Samuel Nightingale Jr.

3 tickets from the November 1776 United States Lottery issued by the Continental Congress, each signed by an official Continental lottery manager (either John Purviance or Sharp Delany). One is signed on verso by two co-owners.

7 receipts issued for the purchase of lottery tickets, 1804-1823, including the Scituate & Foster Academy and the Greene Academy.

18 miscellaneous lottery-related documents, including two legal writ issued against men who failed to pay for tickets in 1818 and 1823; 3 slips recording the official numbers drawn for lotteries in 1839; a formal application to act as a lottery broker, 1836; a list of licensed lottery dealers from 1841; 3 out-of-state tickets; and 4 documents from an 1835 trial of a man selling Rhode Island lottery tickets in New York.

32 broadside lottery advertisements, 1825-1844. Most of these state the total distribution of prizes, the managers, the date and place when winning tickets will be drawn, and the designated charity--at this late date, almost always for the benefit or encouragement of public schools. This may remind modern Providence readers of "Mayor's Own Marinara Sauce," which for decades now has promised that it is "benefiting Providence school children." One unusual broadside is for an 1839 Maryland lottery promoted in Providence, promising "Great Luck at Jones' Office," with prizes to be distributed at the "Truly Fortunate Office." Sizes range from 7 to 17 1/2 inches in height, with surprising variety in graphic design. Bibliography: Bartlett, "History of Lotteries and the Lottery System in Rhode Island," edited by Russell J. DeSimone, 2003 (copy included). Provenance: collection of Russell J. DeSimone. 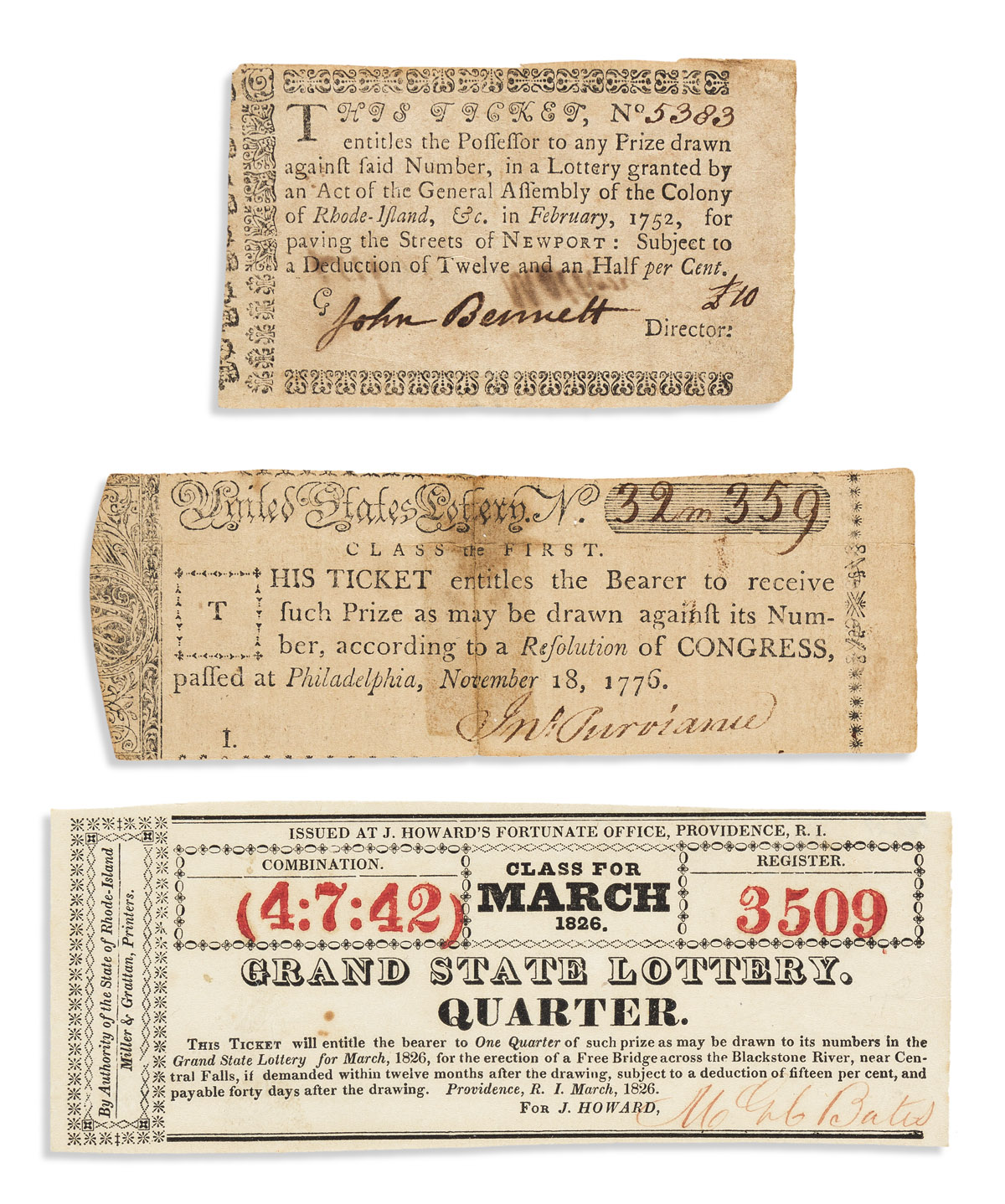