Robert Orr (1745-1811) was a master armorer in Springfield, MA who was contracted to inspect the weapons produced at Eli Whitney's armory in New Haven, CT. At the close of a chatty letter to his son, he remarks "I expect to go to New Haven next week to inspect armes made by Ely Whitney for Unkel Sam 500."

The earliest previously known references to Uncle Sam as a slang personification of the United States was in 1810. The phrase became more generally known in the 1830s, and did not assume its full modern iconic status until the famous World War One recruitment posters by James Montgomery Flagg. The term essentially replaced earlier terms such as Columbia, Lady Liberty, and Brother Jonathan. A popular theory traces the origin to a military meat supplier named Sam Wilson in Troy, NY in the War of 1812. This myth was undermined by the recent discovery of the term in a 24 March 1810 diary entry by a navy midshipman named Isaac Mayo, who referred to himself as being in the service of Uncle Sam.

Robert Orr's letter pushes the timeline back an additional seven years. His casual use of the term with his son suggests it was in common use among military contractors by 1803, and that he had used it in family conversations before. Or maybe he invented it right there on the spot--the meaning is easily gleaned in context. Uncle Sam=U.S.=United States. The phrase has stuck around so long for a reason.

Even setting Uncle Sam aside, this is an interesting letter because of its connection to Eli Whitney's armory. Whitney signed a contract in 1798 to produce rifles for the United States Army, and set up a water-powered factory creating interchangeable parts just north of New Haven, CT--the first of its kind in the United States. The factory was slow to produce any results, and was met with some skepticism about whether the parts really were interchangeable. It made its first deliveries of 500 muskets each in September 1801 and June 1802 before bringing in Robert Orr to inspect further shipments. Orr's career is well documented in history. He was the master armorer at Springfield Armory from 1795 to 1802, inspected batches of 500 rifles for Whitney in September 1802 and March 1803, and continued in that work until replaced by another inspector in 1809. See Moller, "American Military Shoulder Arms," Volume II, pages 156-160. Whitney rifles with his "US--ORR" inspection stamp are still found in collections; Morphy Auctions sold one in 2010.

The main body of the letter is full of family news, all of which matches the known Orr family genealogy and local news events. He writes to his eldest son Hector Orr (1770-1855), a physician in Bridgewater, MA who was then serving as adjutant in the state militia. Orr makes it very clear that Eli Whitney's federally contracted rifles were being produced for Uncle Sam. There's no doubt he means the United States government, and not an uncle who was a weapons mogul. Just in case you are wondering, though, as far as we can determine, the Orrs did not have an actual uncle named Sam. Neither Robert Orr, his wife, or any of their four parents had a brother named Samuel. 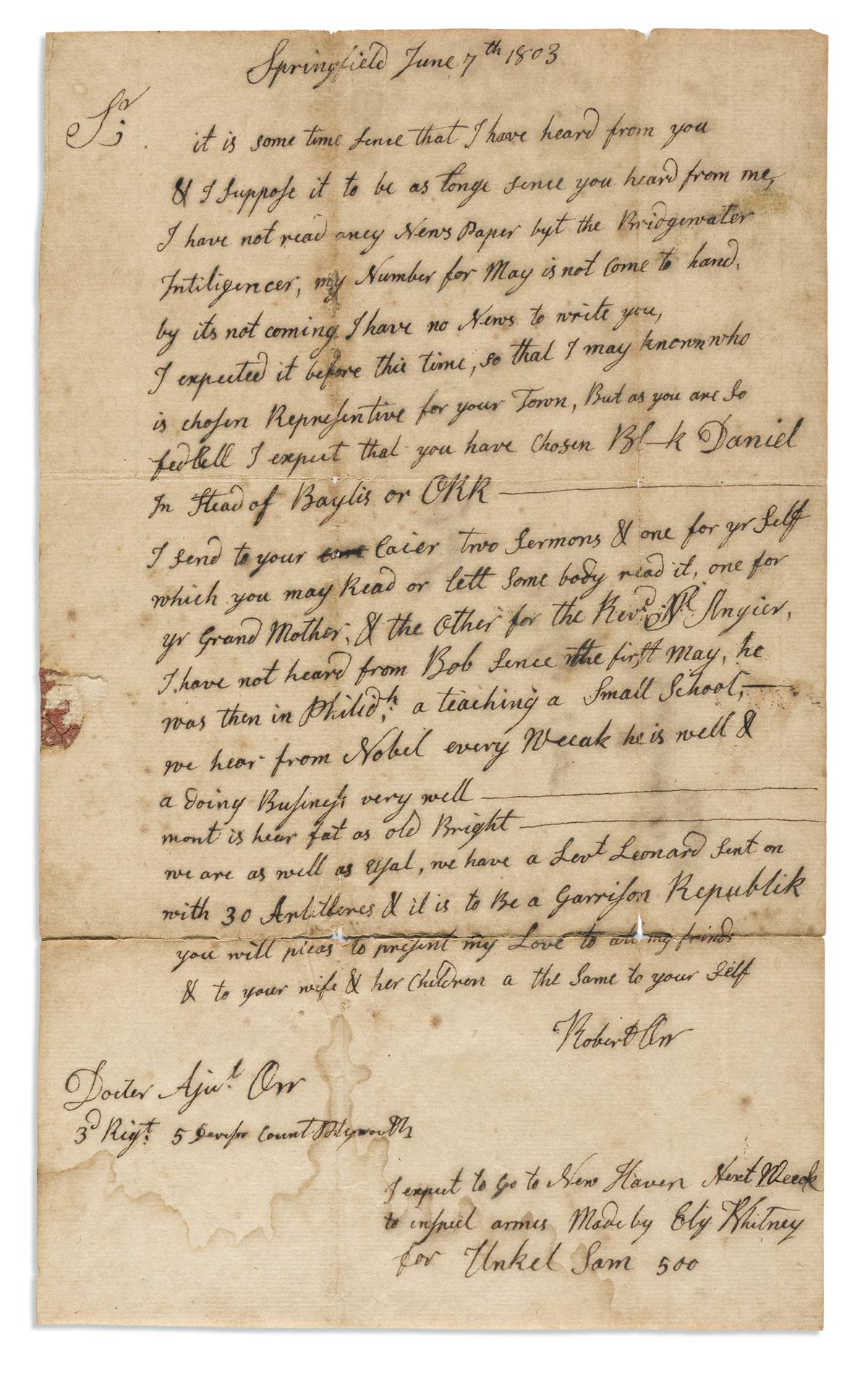