Provenance: purchased directly from the artist by a colleague at Fisk University, 1944; thence by descent to current owner.

This painting is a great discovery, a smaller variant of one of the artist's most famous paintings, Building More Stately Pavilions, oil on canvas, 54x42 inches, at Fisk University Galleries, Nashville, which Douglas painted for the International Student Center at Fisk. This larger painting is currently on a national tour in the artist's retrospective Aaron Douglas African American Modernist and also graced the cover of the catalogue of the important exibition Two Centuries of Black American Art in 1976.

This smaller painting, however, stands on its own as a finished work. Not merely a copy, this smaller version has important differences that gives valuable insight into the creative process of the artist. Douglas has given the figures in many cases different tools or implements to carry. In the larger work, Douglas added the diagonal crane or scaffolding across the upper right corner, a compositional device. These changes and additions show the artist's choices as he moves to a larger scale.

With Building More Stately Mansions, Douglas presents a visionary scene of soaring architectural achievements against the human scale and labor of African Americans. With the artist's signature hybridization of Art Deco and African forms, Building More Stately Mansions pushes his work from the Harlem Renaissance into a forward vision of modernity. In addition, the "stately mansions" of African predecessors are included with their Western counterparts. Romare Bearden and Harry Henderson wrote that Douglas was "the first artist to link the modern African-Americans with their African heritage," and point to his interest in people and education, not machines, as their means to the future.

The formal aspects of the painting also reinforce this unique modern vision. The concentric bands of color have been described as examples of Orphism, as abstract color sensation, and symbolic of the waves of history and learning of human achievements. In studying the original painting, conservators have also discovered a close relationship of this special palette of mauves, greens and corals to the color scheme of the color catalogue room in which it was housed. His mature works from the 1940s moved towards darker colors, and this study appears lighter than the larger work.

Building More Stately Mansions is a culmination of Douglas's development in mural painting. In 1944, he incorporated modern aesthetics into a voice that uniquely spoke to African-American audiences at the time. He gave an inspirational vision to generations of students at Fisk University. Bearden/Henderson plate ix.; Earle pp. 123 and 218.
Set Alert for Similar Items 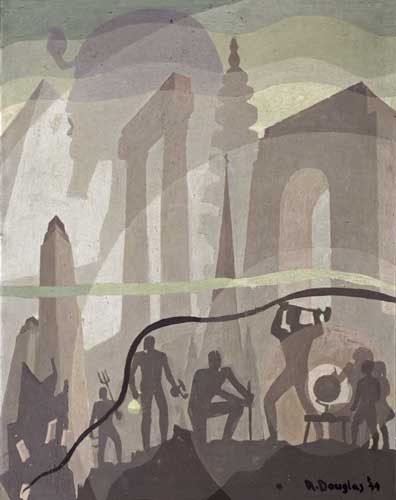