Exhibited: The Negro in American Art, Dickson Art Center, UCLA, Los Angeles, 1966, travelling exhibition, with the printed label on the back.

Haitian Landscape is one of the few paintings known today from the artist's travels during his second Rosenwald Foundation fellowship in 1938, and a wonderful example of his Impressionist approach to landscapes. In September of that year, Douglas travelled to Haiti, the Dominican Republic and the Virgin Islands. In April of 1939, he showed a group of these Haitian paintings in a solo exhibition at the American Contemporary Art Gallery in New York. By the next year, he had joined the faculty of Fisk University as a full time professor.

Like William Edouard Scott, Jacob Lawrence and other African-American artists, throughout his career Douglas was inspired by Haiti's nationalist history and rich landscape. Beginning in 1926, he was commissioned to illustrate Emperor Jones, Eugene O'Neill's play based on Toussaint L'Ouverture's rise. Later in 1929, Douglas illustrated The Black Tsar in Black Magic, a Paul Morand story of a Haitian lawyer. Douglas even painted a Haitian mural in 1942, and a canvas study for it in Wilmington, DE. This oil on canvas was last shown in the important exhibition The Negro in American Art at UCLA in 1966. Earle pp. 180 and 217-19.
Set Alert for Similar Items 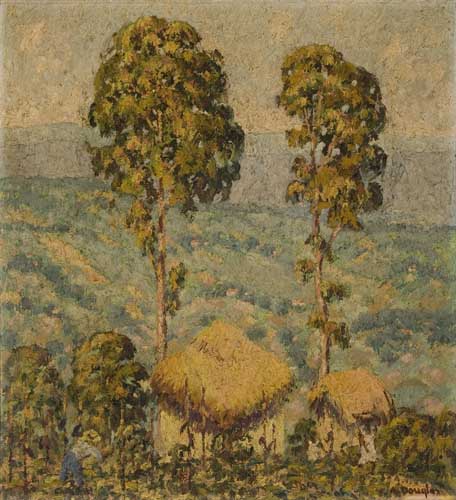