This untitled Spanish view is an exciting European discovery--it is one of Smith's largest landscapes, and one of only a few of his known surviving European canvases. Albert Alexander Smith was, after Henry Ossawa Tanner, the embodiment of the early 20th century African-American expatriate artist. After graduating from the National Academy of Design, Smith moved to Paris in 1920. Over the next 20 years, he worked and traveled throughout France, Holland, Italy and Spain, making a living as a jazz musician, while developing a large body of etchings and paintings. According to Theresa Leininger-Miller, Smith spent extensive time traveling through Spain in the first half of 1926--to Seville, Bilbao and Madrid, where he studied the works of Velázquez and Murillo at the Prado Museum. He painted many landscapes, including market and busy street scenes over the next two years. However, in the U.S., Smith gained more notice at the Harmon Foundation for producing portraits of anonymous European "types"--peasants, beggars, musicians. Leininger-Miller pp. 224-225.
Set Alert for Similar Items 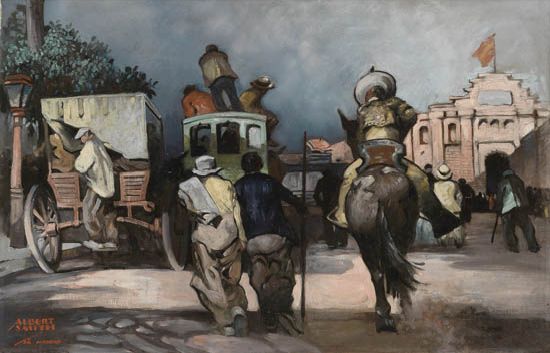