Engraving, before 1500. 251x188 mm; 10x7 3/8 inches. A brilliant, early, richly-inked Meder a-b impression with very strong contrasts and no sign of wear, consistent with the earliest impressions of this subject. Ex-collection unknown collector (Lugt 1861, verso, which appears on other impressions of Dürer engravings both at auction and in public collections); and Robert Hoe III, New York. Trimmed on the plate mark with narrow to thread margins outside the black border line.

Dürer (1471-1528) opened his own artistic workshop in the spring of 1495. In the years leading up to this significant development in his career, he had trained extensively during his teens with his father, a talented goldsmith, as well as with the Nuremberg painter-printmaker, Michael Wolgemut for three years (1486-89) and traveled extensively through southern Germany, Austria and northern Italy, making a journey to Venice and likely Padua and Mantua from the autumn of 1494 to the spring of 1495. According to Bartrum, "He was particularly impressed by the work of artists such as Andrea Mantegna (1431-1506), Giovanni Bellini (circa 1430/40-1516) and Antonio del Pollaiuolo (circa 1432-1498)," (Bartrum, Albrecht Dürer and his Legacy, London, 2002, page 105).

The Sea Monster is, along with Hercules, or the Effects of Jealousy, one of Dürer's largest and most ambitious engravings of his early career up to around 1500. They are clearly both tour de force printmaking efforts by the young artist--who was not yet 30 years old--to achieve acclaim and prestige, much like his Apocalypse woodcut series from the 1490s (see lots 12 and 13). The engravings, however, evince Dürer's profound emulation of Italianate artistic styles of the time, notably the work of Mantegna (see lots 2-4). In The Sea Monster, Dürer combines a Germanic setting (there is a view of Nuremberg castle in the background) with a figural group highly influenced by, if not lifted from, a Mantegna school composition. The nymph who is apparently being abducted by the sea monster also wears an elaborate hair-style that was popular with upper-class Milanese women at the time.

Bartrum notes that Dürer sensed early on in his career, during the late 1400s and the opening of his workshop, that printmaking would be his path to success and fame, "By choosing to make engravings rather than copy them in singular luxury objects, Dürer could imprint his art on the products of his father's trade, effectifvely reversing his filial relation through creative priority . . . Most importantly, he had a highly developed commercial sense; by 1497 he had already hired an agent, Contz Schwytzer, to handle his foreign print sales," (Bartrum, pages 21 and 106). Bartsch 71; Meder 66.
Set Alert for Similar Items 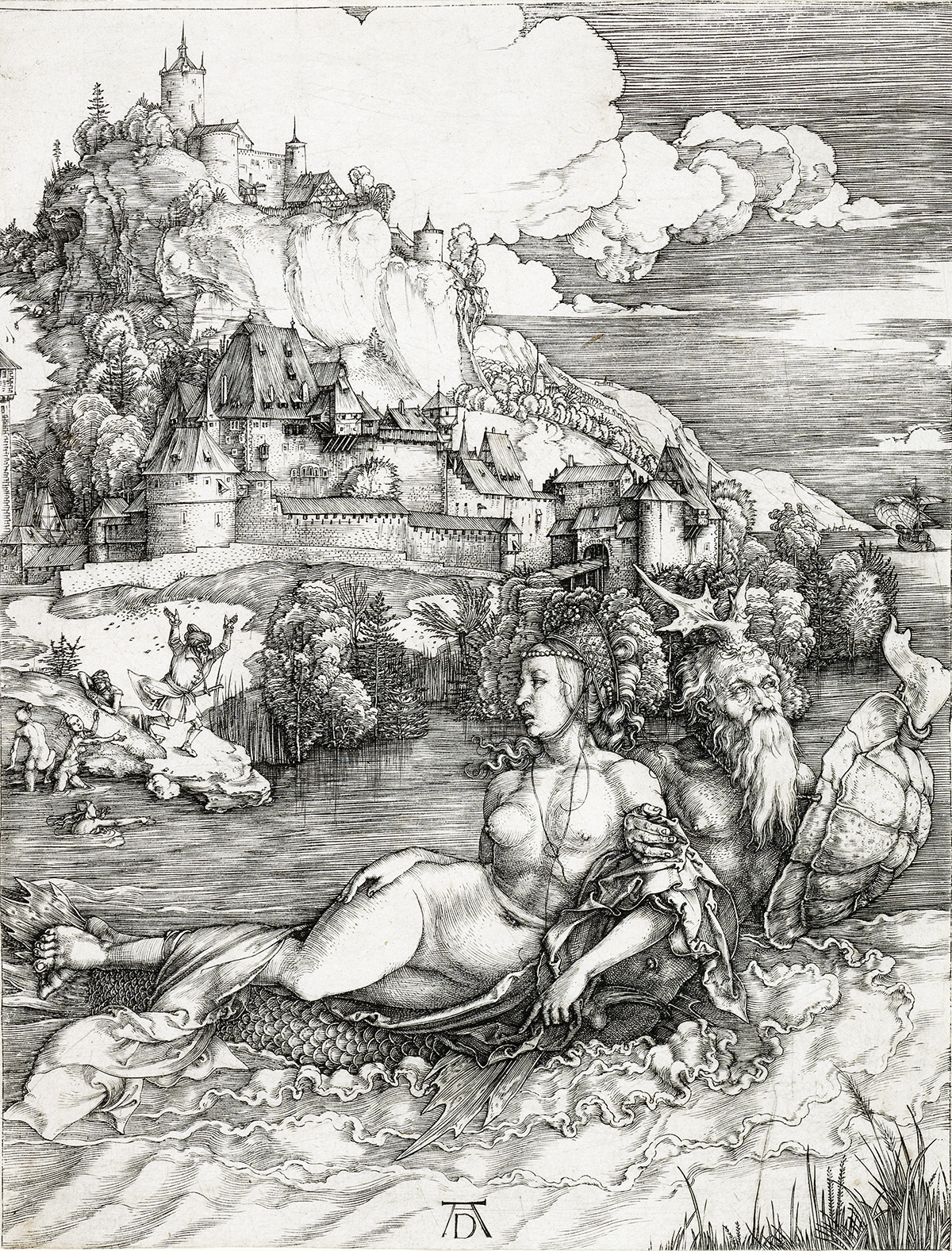