Engraving, 1519. 101x143 mm; 4x5 3/4 inches, narrow to thread margins. A superb Meder a impression, with the vertical lines that extend into the sky at the far right, representing traces of a projected building, distinct, before the scratches to the left of the cross, with strong contrasts, no sign of wear and crisp, partially inky plate edges, consistent with the earliest impressions of this subject.

Dürer's (1471-1528) engraving of St. Anthony, dating from the height of his career, shows the saint hunched over and reading on the outskirts of a fortified city (identified by the art historian Tietze as combining elements of Trent, Innsbruck and Nuremberg, though recognized by the Dürer scholar Thausing as adopted from a drawing titled Pvpila Avgvsta made by Dürer some 20 years earlier). The setting is in stark contrast to other contemporaneous Renaissance images of St. Anthony, more commonly depicting the saint tormented by demons, enduring Satan's temptation.

Dürer must have been particularly proud of this engraving, as he gave it as a gift — along with impressions of his more famous St. Jerome in his study — to several prominent figures on at least six occasions during his 1520-21 trip to the Low Countries. In his diary entry for September 3, 1529, from Antwerp, he wrote, "I gave Wilhelm Hauenhut, equerry of Duke Frederick Palatine, an engraved 'St. Jerome' and the two new half-sheets: The Virgin and 'Anthoni'."

Scholars from Panofsky onward have remarked on the "modern" aspect of the composition, in which the huddled form of St. Anthony echoes that of the walled city behind him. "The scenery almost dominates the composition. It is here a 'cubistic' phenomenon, exclusively composed of such clear-cut stereometric solids as prisms, cubes, pyramids, and cylinders which bring to mind a cluster of crystals," (Panofsky, 1943, volume I, p. 201). In this context, one cannot help but to recall Cézanne's pre-cubistic landscape renderings of Mont Sainte-Victoire, which in turn so profoundly influenced Picasso and Braque and the foundations of 20th century modern art. 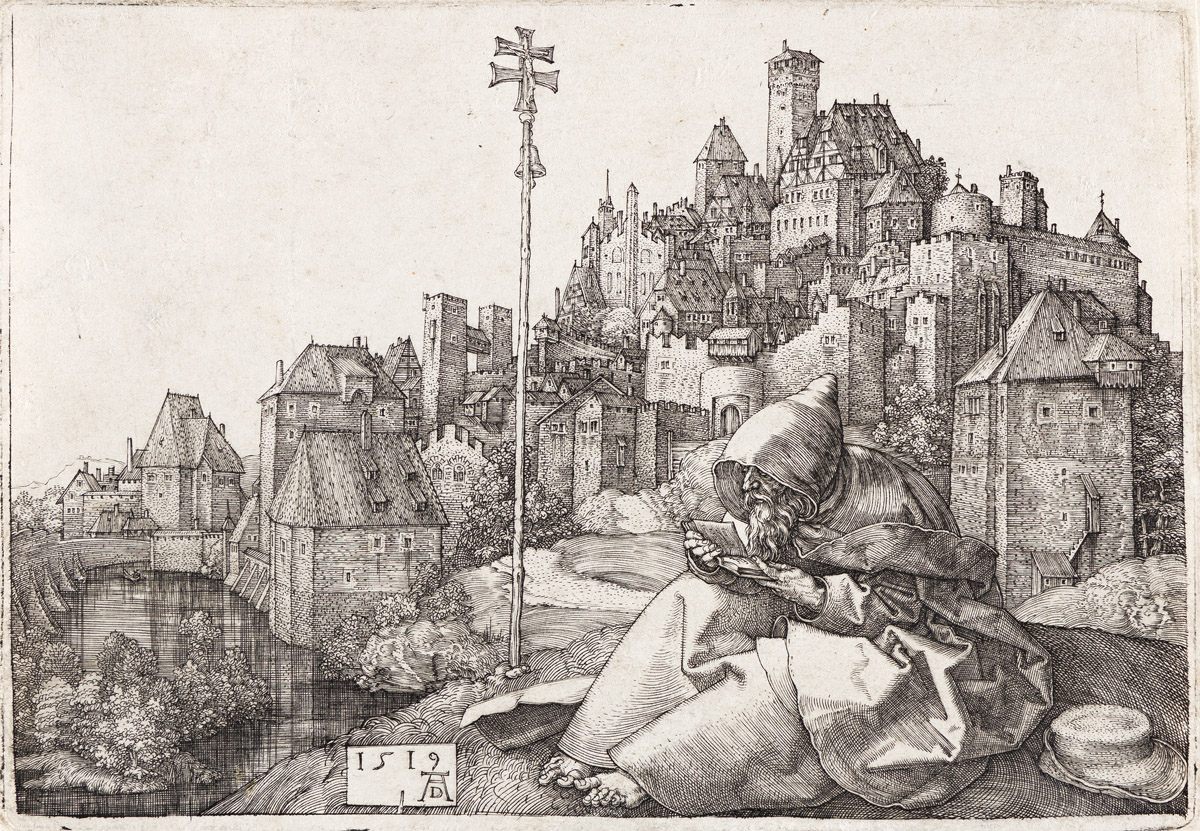