Engraving, 1514. 246x189 mm; 9 3/4x7 1/2 inches. A brilliant, early, well-inked, evenly-printed and luminous Meder a impression with all the fine lines distinct, with strong contrasts, with no sign of wear and with the 2 centimeter dark band at the upper edge (to the right of center), characteristic of the earliest impressions of this subject. With thread margins or trimmed on the plate mark, with narrow to thread margins outside the narrow black border line.

St. Jerome (ca.340-420) was a great Bible scholar known for the Vulgate, his revised Latin translation of the New and Old Testaments. A popular humanist saint throughout the Renaissance, St. Jerome was often depicted in his home engrossed in his studies. He is characteristically presented with his cardinal's hat and accompanied by his lion companion (a friendship he made when he compassionately removed a painful splinter from the lion's paw).

The large gourd hanging from the ceiling is a reference to philological debate surrounding the translation of a Hebrew word for plant mentioned in the story of Jonah in the Old Testament. Traditionally the translation was to cucurbita, meaning gourd, but St. Jerome went against this accepted translation and selected to use the word hedera, meaning ivy. This anecdote serves to exemplify St. Jerome's erudition and his commitment to his holy task. The carefully drafted perspective of Jerome's study is representative of Dürer's own focus on theories of perspective, which he defined in treatises published in 1525.

St. Jerome in his Study, like Melencolia I (lots 22 and 221), represents one of the three meisterstiche (or master engravings) produced by Dürer. It has been argued that St. Jerome in his Study and Melencolia I represent the division of divine and secular knowledge, where the contrast is made apparent by comparing St. Jerome's peacefully meticulous divine study, with the angst-ridden, troubled genius in Melencolia I. The purported message conveyed by comparing these two prints is that devotion and attentive religious study leads to internal reward and harmony, while secular intellectual pursuits lead to tribulations and anxiety.

Dürer was clearly partial to this saint; he represented St. Jerome more than any others in his prints. His choice of subject might also have been influenced by the 1514 translation into German of St. Jerome's biography by his friend and fellow Nuremberg humanist Lazarus Spengler (1479-1534). Bartsch 60; Meder 59.
Set Alert for Similar Items 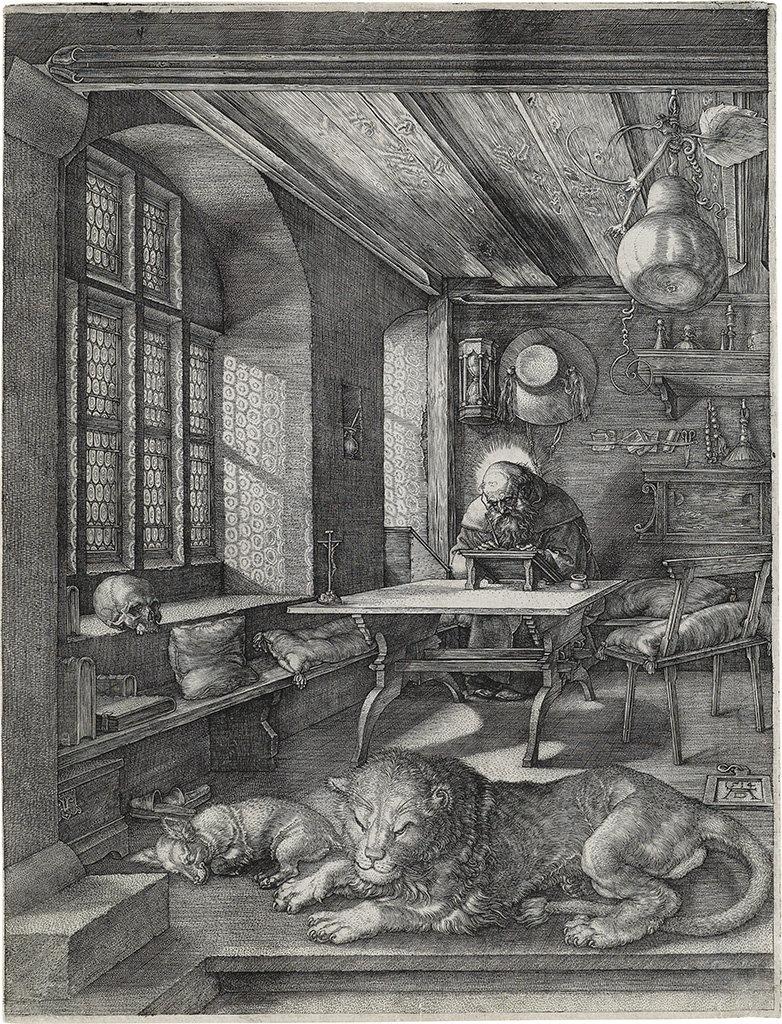