This wonderful painting is an excellent and early example of Allan Crite's famous "neighborhood" series of paintings. While a student at the School of the Museum of Fine Arts and a member of the Boston Society of Independent Artists, Crite worked with the PWAP (Public Works of Art Project) briefly from February through April of 1934. According to Crite's 1979 interview with Robert F. Brown for the Archives of American Art, he and his mother, Annamae Crite, decided they could no longer accept the label of being "on relief," of taking government support. In addition, the Grace Horne Galleries on Newbury Street had begun showing his work--likely the first African-American artist to exhibit there.

Crite painted many of these street scenes with children, and of everyday life of his Roxbury, Boston neighborhood that year, including Marble Players, Cambridge, Sunday Morning, Street Scene and Late Afternoon, each gifted from the artist to the Boston Athanæum, and exhibited in the 2001 Frye Art Museum exhibition Allan Rohan Crite, Artist-Reporter of the African-American Community. Street Scene and Late Afternoon are also dated "April 1934." Crite painted another view of this square, including the pharmacy and water fountain, in 1936, during his tenure in the WPA, which is in the collection of the St. Louis Art Museum.
Set Alert for Similar Items 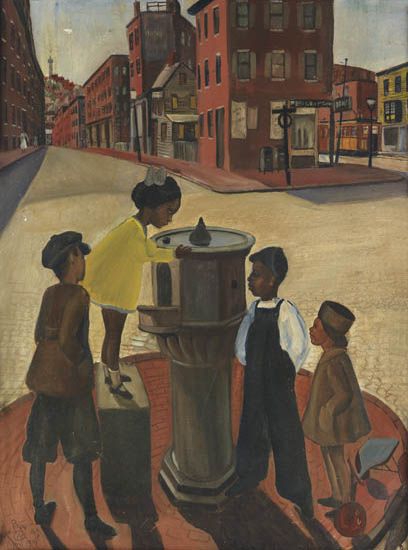