Provenance: acquired directly from the artist, with the artist's Crite House Museum label on the verso; private collection; thence by descent to the current owner.

Sterling Street, Boston, Mass is an early drawing that epitomize's Crit'es "Neighborhood Series" from the 1930s and 40s--his observations of the street activities of African Americans in Boston's Roxbury and South End districts. Crite participated briefly in the Public Works of Art Project (PWAP) in 1934, and the Federal Art Project, WPA, for a little less than a year in 1936.

Crite best summarizes the series: "My intention in the neighborhood paintings, and some drawings, was to show aspects of life in the city with special reference to the use of the terminology 'black' people and to present them in an ordinary light, persons enjoying the usual pleasure of life with its mixtures of both sorrows and joys ... I was an artist-reporter, recording what I saw." Caro, p. 25. 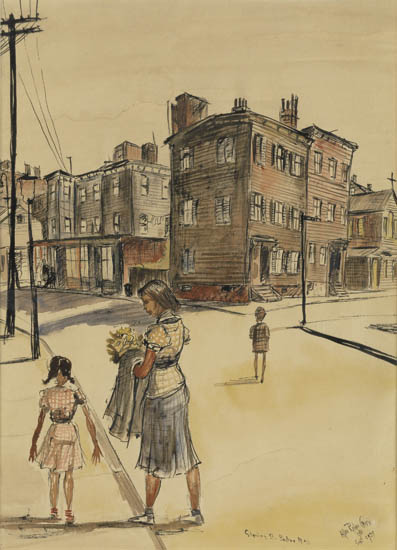