the founding partnership document of salisbury furnace. This northwestern Connecticut site became, under later ownership, one of the most important iron foundries in early America, and is best remembered for producing hundreds of cannons for the Continental Army during the American Revolution.

Adding to the interest and significance of this document is the name of the company's junior partner, a young farmer named Ethan Allen (1738-1789) who was living in Cornwall, CT at the time. Allen later settled in Vermont and went on to greater fame as leader of the "Green Mountain Boys" in the Revolution. Allen seems to have been the visionary behind this project, and recruited John Hazeltine to provide much of the capital, while the Forbes brothers provided the technical expertise. As one historian describes it, "Allen's managerial talent (and his sense of civic responsibility) fell far short of his entrepreneurial skills. In three tumultuous years in Salisbury he repeatedly demonstrated his physical prowess by assaulting his neighbors, shocked and (privately) entertained the townspeople with his rich command of profanity, and soon parted company from his partners" (Gordon, 30). All four partners sold out their interests in the Salisbury Furnace by 1765. The Connecticut Committee of Safety seized the Salisbury works from its new owner in 1776, and converted it to cannon production.

The agreement between Allen, Hazeltine, and the Forbes brothers describes their partnership to "build a furnice to run iron ore into pig mettle . . . on a stream and nigh by an ironworks . . . in ye west part of sd Salisbury." Hazeltine agrees to contribute 50% toward the initial stock and construction, the Forbes brothers each giving 18.75%, while "Ethan Allen agrees to build one eighth part," or 12.5%. On the second sheet, which originally faced the signature page, is a partial draft of what appears to have been the original proposed agreement, with a notary statement on the verso. Allen's involvement in this foundry was his first venture into public affairs, and it proved to have far-reaching significance to the armament of the American military. 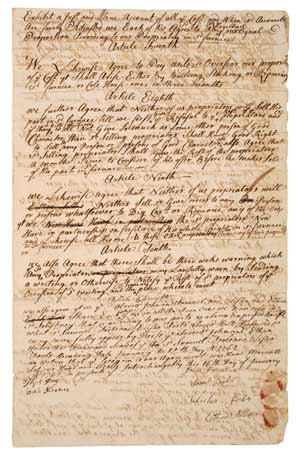