Price Realized: $ 4,600
Price Realized: $ 5,750
?Final Price Realized includes Buyer’s Premium added to Hammer Price
Estimate: $ 3,000 - $ 4,000
ALPHONSE MUCHA (1860-1939) [10TH ANNIVERSARY OF THE INDEPENDENCE OF THE REPUBLIC OF CZECHOSLOVAKIA.] 1928.
47 1/8x32 3/8 inches, 119 3/4x82 1/4 cm. K. Kríž, Prague.
Condition B+: red color faded; repaired tear at top edge, slightly into image; creases and printer's creases in margins and image; light tape stain in lower left corner; sharp fold in upper left corner; minor red overpainting along creases in lower image. Framed. Unexamined out of frame.
"This poster commemorates the tenth anniversary of the founding of Czechoslovakia . . . [it] is a purely institutional poster, in as much as it doesn't advertise any specific event out of the many celebrations staged that year. It may have been done by Mucha at the request of Czech president Thomas Masaryk, with whom he became acquainted years earlier in the United States" (Lendl p. 109). "The girl in a ceremonial robe represents the young country, and her headband bears the heraldic emblems of the component ethnic regions from which Czechoslovakia was created: Czechia - i.e. Bohemia (the lion), Moravia (the checkered eagle), Slovakia (the cross), Ruthenia (the bear), and Silesia (the eagle at left). The female figure behind her who is crowning her with a garland of flowers is again a mythical being, representing the victors of World War I, who, led by President Woodrow Wilson, dictated the terms which split the old Austro-Hungarian monarchy" (Rennert / Weill p. 369). Mucha worked tirelessly to help the new nation construct, mold and forge its new identity. Among his ubiquitous and essential contributions to the image of Czechoslovakia were postage stamps - he designed the country's first, which remained in print through 1992. Beginning in 1919, he created seven different banknotes which went into circulation and he also designed police uniforms and official government documents. Lendl p. 292, Brno 73, 150th Mucha 269, Rennert / Weill 112, Mucha / Japan 149, Mucha / Henderson 119, Mucha / Bridges A73.
Set Alert for Similar Items 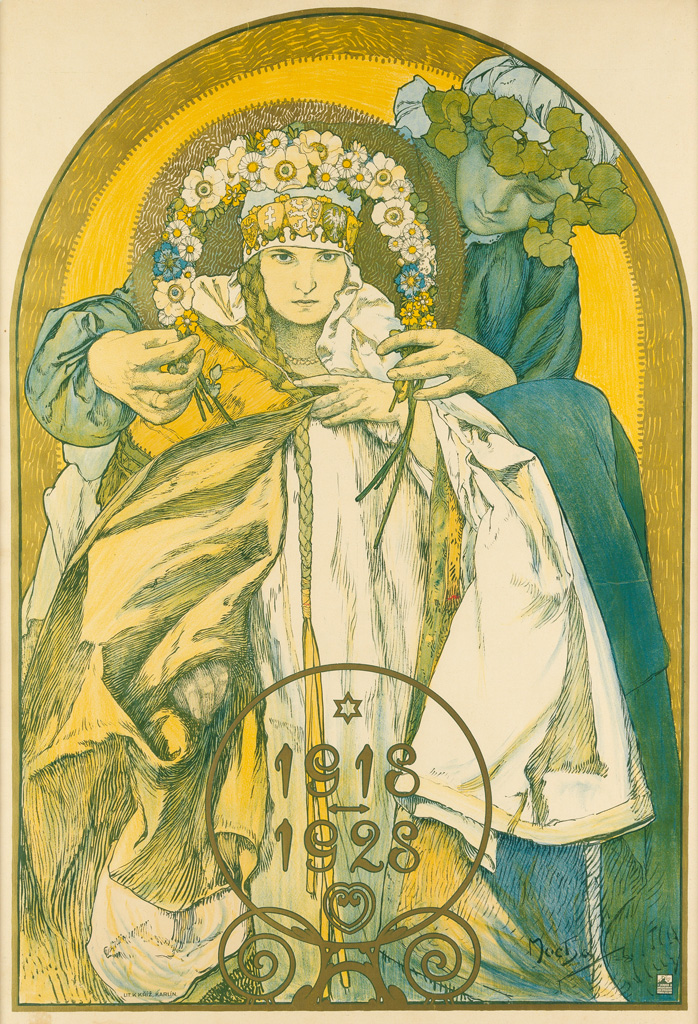