Price Realized: $ 260,000
Price Realized: $ 312,000
?Final Price Realized includes Buyer’s Premium added to Hammer Price
Estimate: $ 300,000 - $ 400,000
ALPHONSE MUCHA (1860-1939) [ILSÉE PRINCESSE DE TRIPOLI.] 1897. 138 hand-colored proofs. Bound in two ornate, silk-covered albums, all edges gilt.
Each sheet approximately 11 1/2x9 inches, visible approximately 8 7/8x6 7/8
Condition varies, generally A. 138, of 140, hand-colored (watercolor) proofs, each uniformly displayed within gold-rimmed passepartouts. Albums elegantly bound with green and white floral-patterned silk.
Mucha's idea of an "art book," in which each page is richly illustrated, was influenced by the work of Eugene Grasset and Carlos Schwabe. Mucha frames each page with a graphic cord that interweaves, in a different pattern, with the borders on every page. The overall result is his "most complete statement in the Art Nouveau style . . . [and] one of the best examples of total book design" (Mucha p.12). "Ilseé was a bibliographical rarity from the day of its publication and . . . it is Mucha's most successful book, displaying his authoritative mastery of design on every page, and at a time of distinguished book illustration and production, it is unquestionably a masterpiece" (ibid).The book was originally conceived by H. Piazza on the basis of Edmond Rostand's successful theatrical production of Princess Lointaine, starring Sarah Bernhardt, for which Mucha had designed the costumes. Piazza set the project into motion but was unable to reach a financial agreement with Rostand. Instead he hired Robert de Flers to rewrite the mythical love story. By the time Piazza signed a contract with de Flers, and completed his subscription for the book, there were only three months left for Mucha to work on the illustrations. While the fairytale story is of little literary consequence, the concept and execution of the design was extraordinary. In order to help Mucha achieve this Herculean task, Piazza moved him into a new, larger studio on the Rue du Val de Grâce, where he would have hand printing presses on location to help him with his work. Mucha himself described the feverish pace and style of work in his new studio. "The work on Ilseé proceeded as follows: the script, which had been made for me from the proofs of the book, was divided into separate pages and I sketched the compositions for each of them in pencil on tracing paper. Then I drew the figural part on to the stone which I passed to the lithographer who completed the page following my pencil rough. As soon as the stone was finished, it went to the print shop and straight on to the press. Thus for at least six weeks my studio was converted into a lithographic workshop with all its inconveniences" (Alphonse Mucha: The Master of Art Nouveau, p. 103). Mucha's son, Jiri, describes the scene in the studio as being "literally a conveyor belt. While father drew the next page, the lithographers were transferring the previous one on to the stone, or in the case of the borders, multiplying a decorative motif, which he had drawn for them on stone, into a complete pattern" (ibid. p. 98). The immediate result of all the work done by Mucha and his team of lithographers and assistants was the monochromatic keystone printing of the 141 total images for the book (including fleurons, chapter headings and chapter frontispieces). As Jiri Mucha also pointed out (in reference to his father's working on decorative panels), "the printer produced several monochrome proofs . . . which [Mucha] proceeded to color. This was a great time-saver, as he did not have to draw everything again and again if he did not like the first or second colored version" (ibid. p. 89). No other monochromatic proofs for Ilseé have ever surfaced on the market. The images in these albums are colored in a manner that dramatically differs from the final printed version, which is overwhelmingly autumnal, with a predominance of oranges, browns and greens. This, Mucha's hand-painted vision, is a true fairy tale, alive with a rainbow of different colors and shading. Piercingly exquisite, his color selection brings each page to life in a manner that almost negates the need for any text. In addition to colors, he is very liberal with the use of gold and silver. Far more of these hand-colored pages are gilded with metallic inks than in the printed version. The grand vision of Mucha's project had to be drastically downsized most probably to meet production deadlines and cost. Yet "Mucha's own high-regard for his illustrations for Ilsée is evident from their presence . . . at his exhibition in the Salon des Cent" (Spirit of Art Nouveau p. 229). In June, 1897, the prestigious Salon des Cent dedicated a show to over four hundred of Mucha's works. The printed catalogue for the exhibition lists these 140 "aquarelles originales d'Ilseé" for sale, with an additional 112 "croquis originaux pour Ilseé." The Spencer Collection at the New York Public Library owns a collection of 28 of Mucha's rough sketches and the original artwork for the cover of Ilseé. They were purchased from Viennese book dealer Christian Nebehay in 1969, described as "mounted in their original binding." The 28 sketches and the cover art are contained in a box covered in the identical green and white floral silk fabric that binds these two albums of watercolors. That such unusual fabric bindings should appear on two different collections suggests that they were originally one, bought at the Salon des Cent by the same collector, and expensively bound in fitting tribute to their importance. 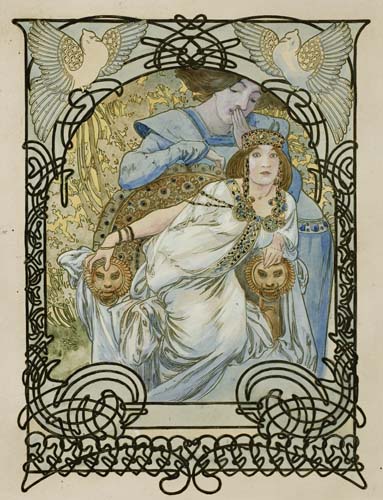