Price Realized: $ 4,600
Price Realized: $ 5,750
?Final Price Realized includes Buyer’s Premium added to Hammer Price
Estimate: $ 6,000 - $ 9,000
ALPHONSE MUCHA (1860-1939) BIÈRES DE LA MEUSE. 1897.
23x15 inches, 58 1/4x38 cm. F. Champenois, Paris.
Condition B / B+: repaired tears and overpainting in left image; restored pin holes and overpainting in corners and around border of image; creases in image; slightly trimmed along bottom margin, affecting printer's mark. Matted and framed. Unexamined out of frame.
This is one of Mucha's most well-renowned images. The central figure is a young daydreamer whose hair is filled with the hops, barley and malt, which together brew the foamy stein of beer which her hand is absentmindedly caressing. Her hair flows around her body as freely as the beer flows over the stein, her curls embodying Mucha's trademark "macaroni" style. The image is an impeccable melding of art and commerce in which Mucha's promotion for a French brewer's association becomes a gentle, yet compelling Art Nouveau masterpiece. The allegory of the Meuse River, depicted in gray and white at the bottom, appears in several other posters from this era, and was an established trademark of this organization. Even in its own time, this poster was considered a classic. It was so revered that in 1899, in an amusing supplement to the Maîtres de l'Affiche, Adolf Willette designed an image of a young girl on a country road, kneeling down and praying before this poster, mistaking the beautiful maiden for a saint. This is the rare small format. We have found only one other copy in this format at auction. Lendl p. 93 (var), Brno 31 (var), Rennert / Weill 27 (var 2), Darmstadt 54 (var), Mucha Grand Palais A. 19, Mucha / Henderson 68, Mucha / Bridges p. 71 (var), Triumph des Jugendstils 25 (var), Spirit of Art Nouveau 23 (var), DFP-II 633 (var), Abdy p. 147 (var).
Set Alert for Similar Items 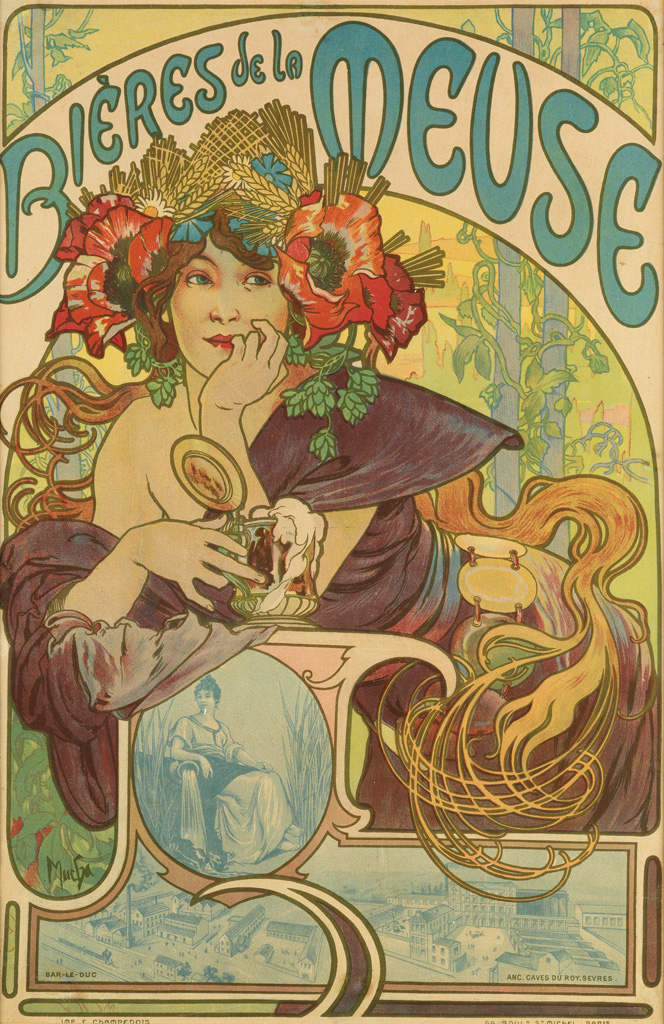