Price Realized: $ 2,200
Price Realized: $ 2,750
?Final Price Realized includes Buyer’s Premium added to Hammer Price
Estimate: $ 4,000 - $ 6,000
ALPHONSE MUCHA (1860-1939) CHOCOLAT MASSON / CHOCOLAT MEXICAIN / [FOUR SEASONS.] 1896.
Sizes vary, each panel approximately 16 3/4x5 3/4 inches, 42 1/2x14 1/2 cm. F. Champenois, Paris.
Condition varies, generally B+ / B: losses to calendarium on Spring panel. Paper.
After the success of his first set of decorative panels glorifying the seasons in 1896, Mucha's printer, F. Champenois, immediately commissioned a second series. While in many ways this second group of allegorical beauties is much like the first (Mucha's two visions of Winter are quite similar), there are evolved differences between the two. In this later set, the colors are sharper in contrast to the pastel palette of the first series; more importantly, this series was originally designed within a graphic frame featuring a floral design at top and a structured bottom section, which bore either the name of each season, a calendar, or was left intentionally empty. This third option was a critical commercial decision to make the panels attractive to advertisers, who would use the blank spaces to fill in their particulars. Chocolat Masson did just that, and was clearly so happy with the results that they came back to Champenois the following year and used Mucha's Ages of Man for their next advertising promotion. As these images were used for Chocolat Masson's 1897 calendar, it makes sense that the images were designed in 1896, thus refuting the up-until-now universally considered date of design of 1897. Rennert / Weill 37 (var 1), Mucha / Henderson 125, Mucha / Bridges C3, Lendl p. 188 & 189 (var).
Set Alert for Similar Items 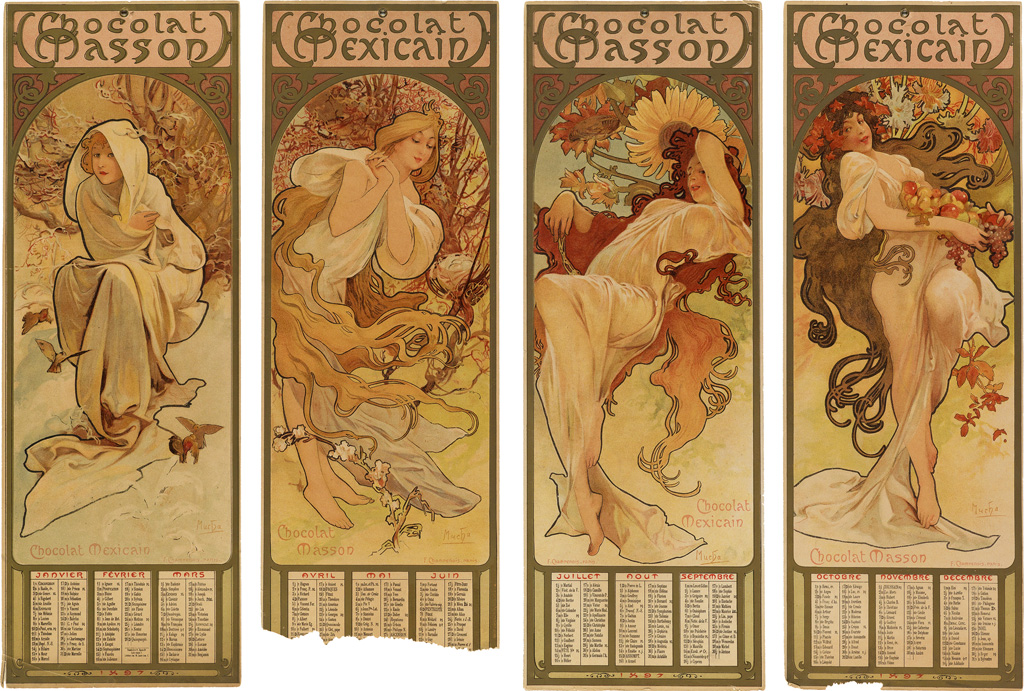