Price Realized: $ 8,000
Price Realized: $ 10,400
?Final Price Realized includes Buyer’s Premium added to Hammer Price
Estimate: $ 15,000 - $ 20,000
ALPHONSE MUCHA (1860-1939) JOB. 1896.
21x16 3/4 inches, 53 1/4x42 1/2 cm. F. Champenois, Paris.
Condition B+: repaired tears in margins, some affecting image; unevenly trimmed margins, not affecting image; tape on verso along tears. Matted and framed.
Job cigarette rolling papers, offered in small packets, were the brainchild of Jean Bardou, a baker in Perpignan. On the cover of these booklets he put his initials separated by a diamond. The public interpreted this as "Job," and the name stuck. Bardou was both a patron of the arts and a man with exceptional vision in regard to advertising. He commissioned artists such as Jules Chéret, Pal, Leonetto Cappiello, Firmin Bouisset, Jane Atché and Toulouse-Lautrec to design posters for his company. Mucha designed two posters for Job; the first is this charming, small format piece featuring the bust of a woman with extravagant hair. She appears to be the same woman he depicted on his poster for the Salon des Cent's 1896 exhibition (see previous lot). While Mucha saw the other poster as "an unfinished design," he viewed this image for Job as complete. The "exquisite arabesque of luxuriant hair . . . became the artist's trademark over the next few years" (Rennert / Weill p. 82). No longer based on reality, the hair on Mucha's maiden became an entirely decorative element, as did the smoke rising from her cigarette. The borders and the poster's title are designed to look like a mosaic, and in the background, Mucha ingeniously utilizes a stylized version of the company's logo as another decorative element. Rennert / Weill 15, Maitres pl. 202, Lendl p. 118, Wember 609, Weill 58, Brno 10, Mucha Grand Palais 28, Darmstadt 50, Mucha / Henderson 47, Mucha / Bridges A6, Reade 12, Triumph des Jugendstils 23 (var), Art Nouveau p. 112, Spirit of Art Nouveau 20, DFP-II 635, Abdy p. 137.
Set Alert for Similar Items 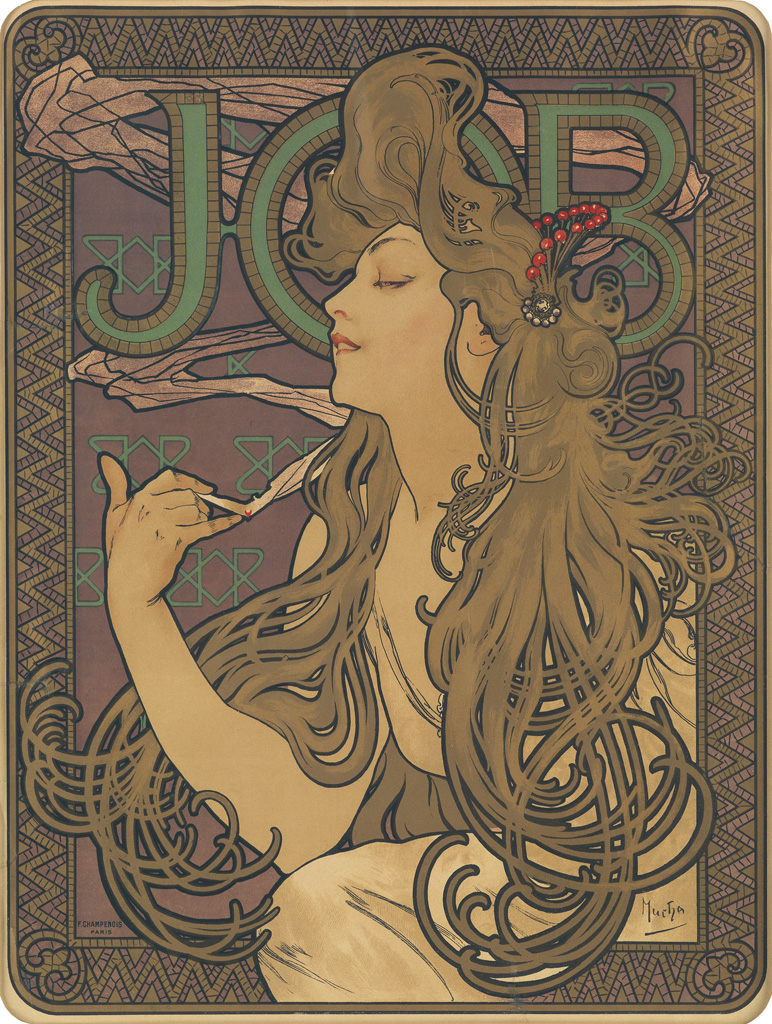