Price Realized: $ 5,000
Price Realized: $ 6,250
?Final Price Realized includes Buyer’s Premium added to Hammer Price
Estimate: $ 6,000 - $ 9,000
ALPHONSE MUCHA (1860-1939) LOTERIE / NARODNI JEDNOTY PRO JIHOZÁPADNI MORAVU V BRNÉ. 1912.
73 1/8x38 3/4 inches, 185 3/4x98 1/2 cm. V. Neubert, Smichov, Prague.
Condition B+: restored loss in upper right corner; repaired tears and staining in margins; minor overpainting in lower right corner; creases in margins and image. Three-sheets. Framed. Unexamined out of frame.
"This poster offers, at 1 koruna apiece, lottery tickets to benefit the National Union for Southwestern Moravia at Brno, with the main prize of 25,000 korun . . . the organization was a regional branch of a nationwide effort to establish schools that would teach Czech and Moravian children in their own language. Such schools had to be supported by private funds, since all the schools provided by the state, then still part of the Austrian Empire, used German only" (Lendl p. 278). Here, Mucha "used his favorite motif of a dead tree as a seat for the symbolic mother of the nation, Cechia, who bends her head in a gesture of despair and defeat. Her right hand rests on a primitive wooden statue of the three-faced pagan god Svantovit, the protector of the early Slavs. His sun sign, horn, sacred steed and miraculous sword are carved in a childish style on his chest. At the front of the composition, a school girl with books and pencils looks at the viewer with an accusing expression as if to say 'the ancient Slavic gods are of no help; it is the living who must come to my rescue" (Spirit of Art Nouveau p. 179). The text banners at the top and the bottom of the poster were printed on separate sheets of paper, so occasionally this image will appear without any text. This is one of two posters Mucha designed advertising this lottery "as a patriot for whom the preservation of the Czech language and culture was of enormous importance" (Spirit of Art Nouveau p. 178). rare. We have found only four copies at auction since 1986. Lendl p. 278, 150th Mucha 262 (var), Rennert / Weill 100, Mucha / Japan 143 (var), Arco p. 97 (var), Sarah Mucha p. 92 (var), Mucha / Henderson 102, Mucha / Bridges A60, Jiri Mucha p. 263 (var), Triumph des Jugendstils 207 (var), Spirit of Art Nouveau 38 (var), Darmstadt P70, Grand Palais A70.
Set Alert for Similar Items 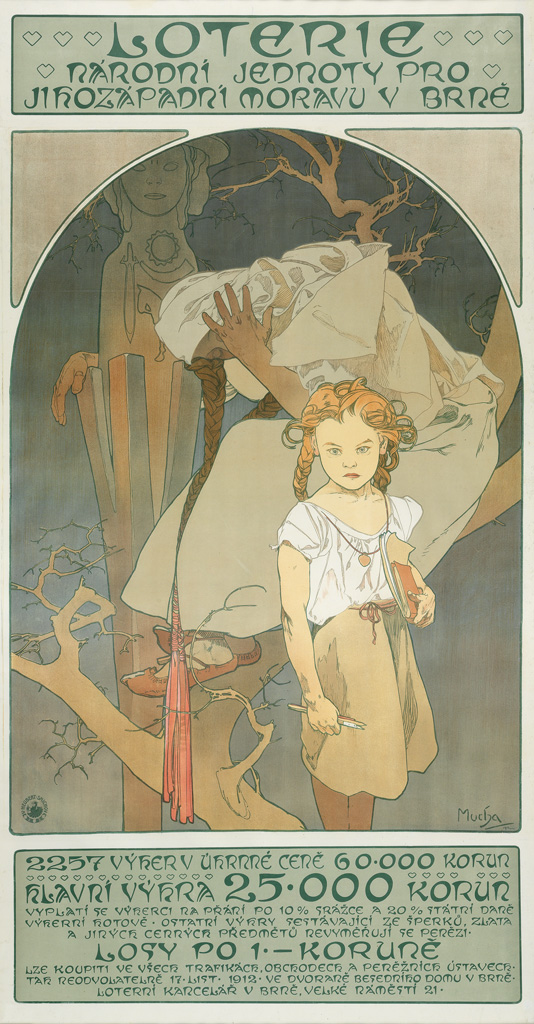