Price Realized: $ 19,000
Price Realized: $ 23,750
?Final Price Realized includes Buyer’s Premium added to Hammer Price
Estimate: $ 12,000 - $ 18,000
ALPHONSE MUCHA (1860-1939) MEDEE / SARAH BERNHARDT. 1898.
81 1/2x29 5/8 inches, 207x75 1/4 cm. F. Champenois, Paris.
Condition B+ / A-: repaired tears, restored losses and minor restoration in margins, some affecting text. Two-sheets. Framed. Unexamined out of frame.
The production of Medee advertised here was a contemporary adaptation of a play originally written by Euripides. A classic, violent Greek tragedy about the warrior Jason, the play begins when he returns home from his quest for the Golden Fleece, bringing with him Medea. When he falls in love with another woman, Medea, "driven by a pagan code of honor and her own dark passions . . . conceives a terrible vengeance of gothic cruelty: she kills Jason's father, her own two children, and his new mistress, so that he would have to go through life deprived of everything he loved" (Rennert / Weill p. 208). The somber and tragic image depicts a glimpse of the slaughter, with Medea, a mad look in her eyes, standing with a bloody dagger over one of her victims. "Mucha's exquisite design uses Medea's arm and the dagger as a giant exclamation point, emphasized by the look of stark horror on her face as she exacts her gothic revenge. It is one of [Mucha's] most powerful posters" (Lendl p. 53). "It carries all the signs of Mucha's masterpieces in composition and color as well as the decorative certainty with which he left the bottom two-thirds of the background white" (Spirit of Art Nouveau p. 151). The composition is organized vertically with Mucha's trademark "halo" behind the actress' head, and lettering designed in the style of mosaic to evoke the story's origin in ancient Greece. Sarah Bernhardt was so enamored with the snake bracelet that Mucha depicted adorning her arm that she actually had one made by Fouquet for her to wear. Rennert / Weill 53, DFP-II 645, Lendl p. 53, Brno 35, Mucha Grand Palais 93, Darmstadt 80, Mucha / Henderson 80, Mucha / Bridges A33, Triumph des Jugendstils 12, Art Nouveau p. 111, Spirit of Art Nouveau 13, Abdy p. 138.
Set Alert for Similar Items 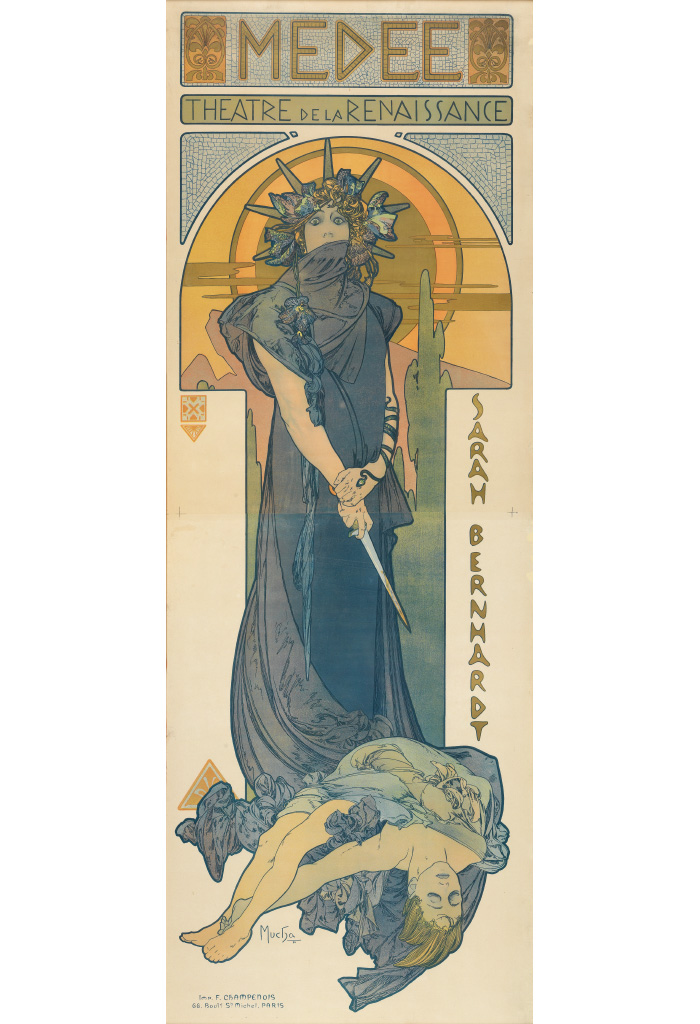