Price Realized: $ 4,400
Price Realized: $ 5,500
?Final Price Realized includes Buyer’s Premium added to Hammer Price
Estimate: $ 7,000 - $ 10,000
ALPHONSE MUCHA (1860-1939) WORLD'S TOUR OF M'ME. SARAH BERNHARDT. Circa 1914.
80 1/8x39 3/4 inches, 203 1/2x101 cm. Carey Print, New York.
Condition B / B-: extensively-overpainted and restored margins; repaired tears, restored losses, creases and overpainting along vertical and horizontal folds. Two-sheets. Framed.
Sarah Bernhardt made her first American tour in 1896, by which point she was already an international star, taking with her a variation of one of the posters Mucha had designed for her in Paris. "As was the case with all these versions, it mentioned no name of the play, nor did it mention that the plays for which the design was originally used were presented on this tour" (Rennert / Weill p. 108). Among Mucha's famous posters for the actress that were reused to promote her American appearances were Gismonda (see previous lot), La Dame aux Camelias, Tosca and this, the rarest, featuring an image of Lorenzaccio. This tour, beginning in 1914, was in many ways the actress' final act; she was already in her late 60s, World War I had broken out, and in 1916 she had her leg amputated below the knee. With these factors combined with a lack of contemporary media coverage, it is uncertain how much, if any, of this tour actually took place, possibly accounting for the scarcity of the image. Note how it is referred to as a "World Tour's" and not an American Tour. For this poster, the anonymous American lithographer knew that they would be unable to match the sophistication and skill of French lithographers, so they interpreted the poster in a simplified manner. Some of the ornamentation from Lorenzaccio's robe has been removed and the color scheme has been radically altered to consist solely of shades of blue and green. The result is excellent, as the figure of Lorenzaccio stands out much more clearly than in the original. Although a copy was reproduced in The Spirit of Art Nouveau (see page 54), this is rare, as we have seen no other copies at auction. Spirit of Art Nouveau p. 54, Brno 6 (var), Mucha / Henderson 61 (var), Mucha / Bridges A10 (var), Reade 7 (var), Lendl p. 47 (var), Triumph des Jugendstils 6 (var), Art Nouveau p. 111 (var), DFP-II 626 (var).
Set Alert for Similar Items 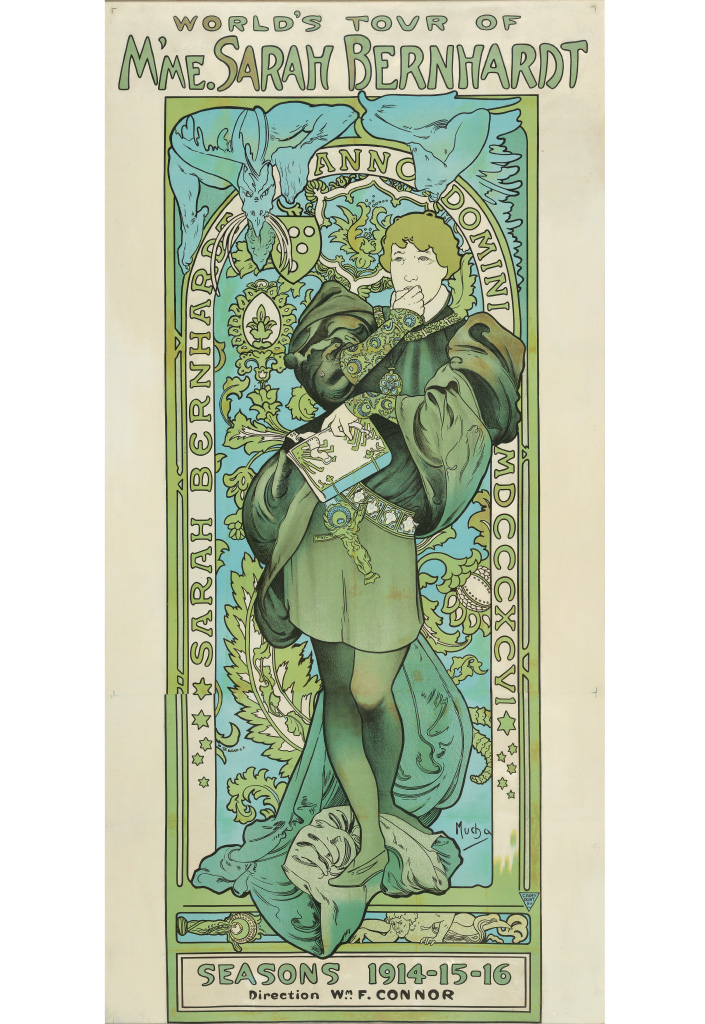