Andy Warhol (1928-1987), the youngest child of three, was born in Pittsburgh, Pennsylvania and grew up in a working class neighborhood. His fascination with pop culture began at an early age; a childhood neurological disease often left him sick for months at a time, and during these reclusive bouts he found comfort and escape through glossy celebrity magazines. After graduating high school and attending Carnegie Mellon University, Warhol moved to New York to pursue graphic design. He quickly landed a number of prestigious jobs, which included designing for Harper's Bazaar and Columbia Records, among many others. Warhol established himself as a successful commercial artist prior to his transition to the fine art realm in the 1950s.

Warhol's first exhibition was held in 1952 at the Hugo Gallery, New York. His drawings during the 1950s remained true to his original illustrative style, they are at once somewhat naive and edgy, as well as decorative and ephemeral (see lot 106). By the early 1960s, he had begun his exploration into Pop Art. Warhol painted his first Pop paintings in 1961, and by the mid-1960s had attained celebrity status with works such as the Campbell Soup Can and Marilyn Monroe series (see lots 108 and 124). The portrayal of Marilyn as a product of mass culture, produced for the public as a consumer item, was so radical at the time that it skyrocketed him to fame.

In 1962, Warhol discovered that screenprinted images could be transferred onto canvases to create paintings, a technique hitherto foreign in the arts. Warhol melded printmaking and painting, blurring the line between an "original" and a "multiple." He took a process traditionally reserved for mass production (screenprint) and used it to create unique, fine art canvases. He applied the industrial, modern era idea of mass production to his artistic method; the flatness produced by screenprinting aptly replicated the shallowness and superficiality of pop culture that he represented. Warhol was not interested in the romantic notion of the artistic process; he judged that the value of art was in the strength of the final image itself.

In the 1960s, Warhol maintained a strong hand in the production of his work and painted mostly without assistance, but by the 1970s had significantly less involvement in the process; he was successfully creating fine art, conceiving images that would be produced by his studio assistants, without ever even handling the works except to sign them. Warhol took the division of labor that he had experienced in the commercial art world and applied it candidly to fine art, a groundbreaking move that has become much more common with contemporary artists (notably Jeff Koons, see lot 278) and Damien Hirst, see lots 296-298).

In 1966, Warhol announced his "retirement" from painting, having achieved substantial recognition already as both a painter and filmmaker. While committing more time to filmmaking, Warhol also established his own printmaking company, Factory Additions, in New York. Among the company's first printing projects was the Cow series, 1966 (see lot 110), a color screenprinted wallpaper that he initially used to decorate, from floor to ceiling, the entire Leo Castelli Gallery in New York. One year later, in yet another affront to the art world, he pursued his interest in serialization by publishing portfolios which recycled images from his most popular paintings. These print series include the iconic Campbell's Soup I and II, Flowers (see lot 112), Electric Chair (see lots 113 and 114) and Marilyn Monroe.

Intensely private throughout his life, Warhol summed up his career most aptly: "If you want to know everything about me, just look at the surface of my paintings, it's all there, there's nothing more." The mark that Warhol's work has left on the art world is unparalleled: in its relevancy to the culture in which it was made, in the challenges it poses to the question of what constitutes fine art, in the polarity that it still precipitates and in the lines that it blurs between high and low art and culture.

In 1983, Warhol exhibited over a hundred paintings that he created specifically for children (his Toy Paintings series) commissioned by his European dealer Bruno Bischofberger and shown at his gallery in Zurich. Warhol created wallpaper for the event, and the paintings were even hung at children's eye-level. The current work, GA-43 Robot, is from this series, one of a number of renderings of different models of toy robots.
Set Alert for Similar Items 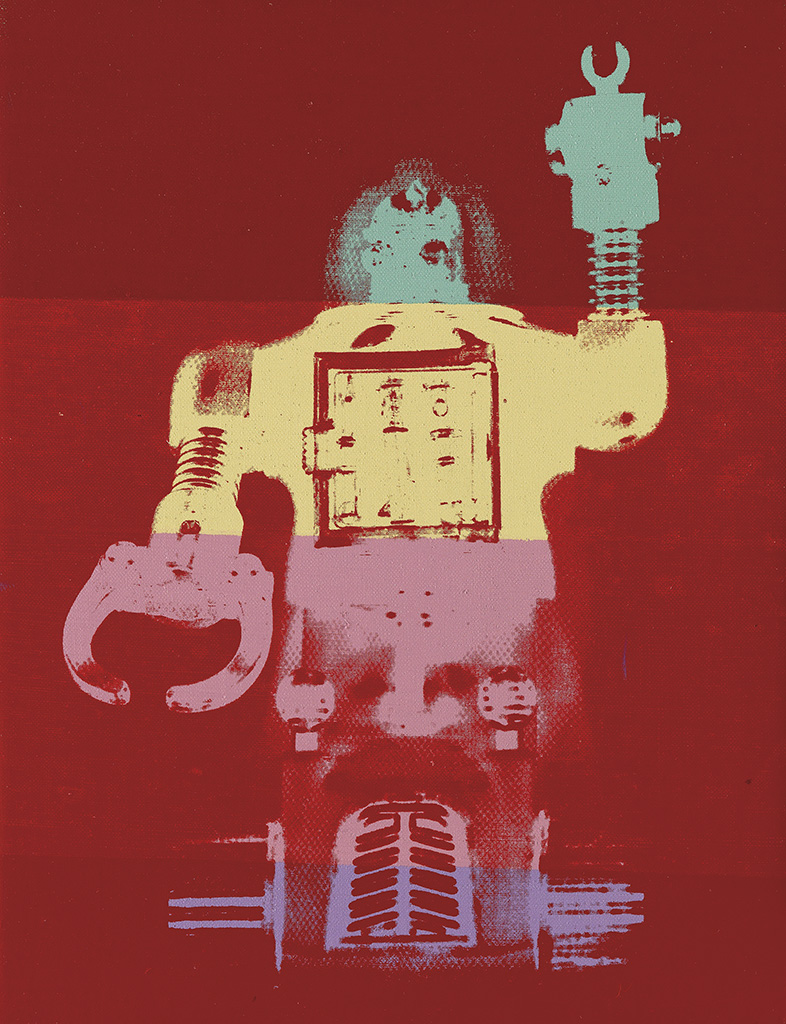