Each print in this Grapes series is unique, as opposed to the regular Grapes series, also from 1979, issued in an edition of 50.

Following his self-professed "retirement" from painting in 1966, Warhol became very involved in the burgeoning prints market, establishing his own printing/publishing company, Factory Additions, in New York, and producing what is perhaps the largest, most recognized printed ouevres among his Pop Art contemporaries. From the outset of his printmaking career he had incorporated screenprinting, adopted from common advertising practices like signage and poster making, further developing this rather mundane process, from one edition to the next, with ever more complex results.

According to De Salvo, "One of the most conceptually provacative developements of the 1970s was the greatly expanded use of unique edition prints," approximately two-thirds of Warhol's screenprinted output of the 1970s is unique editioned prints, "screenprints illustrating the subtle variations and permutations that Warhol was able to achieve through his expanded notion of the printing process. A unique print, with no duplicate, pushed the aesthetic and economic bounderies that traditionally defined prints as identical units. Although a precedent for Warhol's method can certainly be found in artistic uses of the monoprint, that process had not been intended to produce the large numbers that were possible through silkscreen," (Andy Warhol Prints, New York, 1985, pp. 24-25).

Warhol's repeated use of floral still life in printmaking dates back to around 1961, when he produced one of his characteristic blotted-line ink drawings of a basket filled with Mexican flowers, over which he hand-stamped watercolor petals on the flowers, to secure an illustration commission from Vogue magazine. With his meteoric rise to international artistic popularity in the early 1960s Warhol made one floral still life edition after another: Flowers, offset color lithograph, 1964, created to announce his exhibition at Leo Castelli Gallery, New York (see lots 149 and 152); the Flowers suite of 10 color screenprints, 1970; and the Flowers series of 10 black and white screenprints, 1974, each with unique hand coloring in watercolor; culminating in this series of Grapes, 1979, a suite of six differently arranged bunches of grapes, branches and leaves overlayed with the artist's signature blocks of color and dark black contour lines.

There was a deluxe portfolio edition of the six Grapes subjects, entitled Grapes D.D., the latter initials signifying diamond dust, which has a layer of fine diamond dust applied over the heavily-inked screenprints. Only four of these deluxe diamond dust portfolios were produced, numbered I-IV, in which each of the six subjects is uniquely inked and diamond dusted. This is the first instance of Warhol using diamond dust in his prints as well, a practice which he repeated frequently in the early 1980s, and yet another method by which he gave exclusivity to and even glamorized his editioned work. Feldman IIA. 195A.
Set Alert for Similar Items 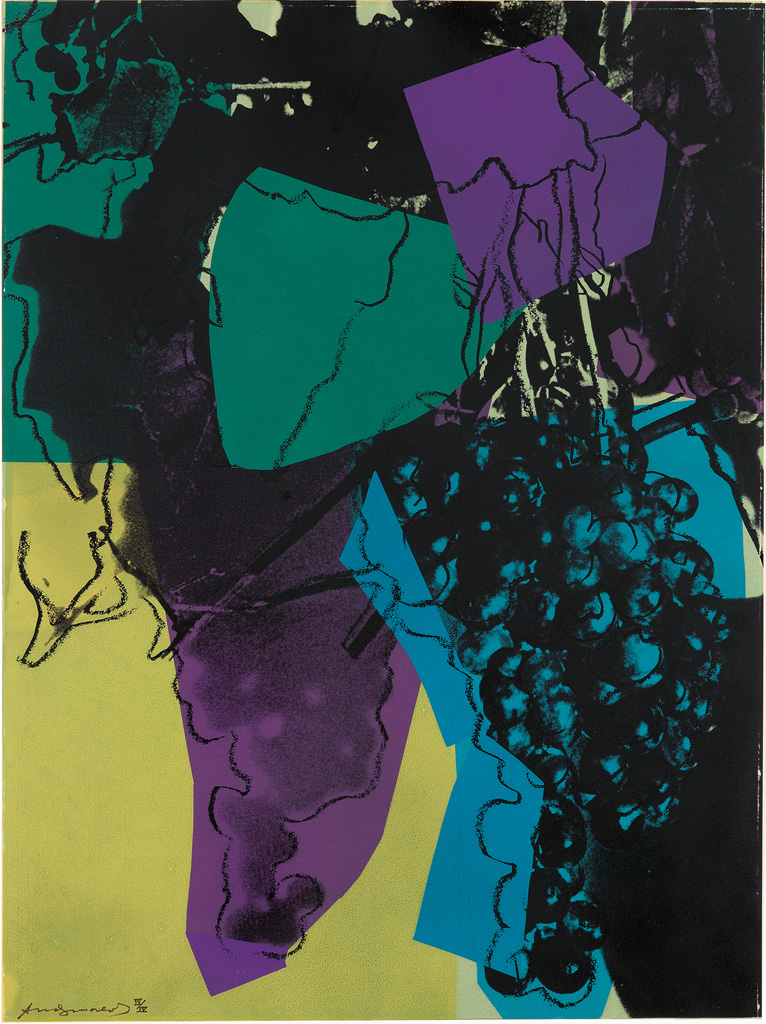