Plaster painted with a bronze patina, circa 1929. Approximately 230 mm; 9 inches high. With the artist's signature stamp, at the edge of the base verso.

Provenance: John W. C. Cole, Sr., Winnetka, IL; thence by descent to John W. C. Cole, Jr., Portland, ME. John Cole, Sr. acquired this sculpture in Chicago in 1942 upon the eve of his service in World War II. He discovered this sculpture while collecting from antique and second-hand shops, where he sought out Southwest artworks by Native Americans, among other beautiful objects and art.

Gamin has come to symbolize African-American sculpture in the Harlem Renaissance. This excellent example is one of only several smaller painted, plaster versions of the life-size bronze made by the artist, and displays all the sensitivity and skill that made this work so celebrated.

Gamin also represents a turning point in Savage's career. Theresa Leininger-Miller describes how Gamin brought Savage success at the end of the 1920s. Out of 10 works on display at Harlem's 135th Street branch of the New York Public Library, Charles Russell Richards, the art director of the General Education Board of New York, singled out Savage, recognizing Gamin as a significant work. Romare Bearden and Harry Henderson describe how two Harlem businessmen, Eugene Kinckle Jones, of the National Urban League, and John E. Nail, father-in-law of James Weldon Jones, also singled out Gamin for acclaim. The sculpture was illustrated on the cover of Opportunity in June 1929, and exhibited at the Harmon Foundation in 1930. It also earned the artist a scholarship from the Rosenwald Foundation. Other versions are found today in the collections of Camille O. and William H. Cosby, Jr., the Schomburg Center for Research in Black Culture, New York, the Indianapolis Museum of Art, the Smithsonian American Art Museum, Washington, DC and the Howard University Art Museum, Washington, DC. Leininger-Miller pp. 178-179; Bearden/Henderson p. 172. 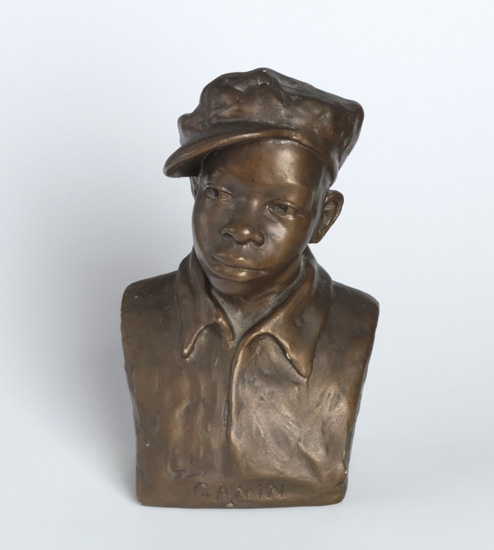