Provenance: acquired directly from the artist; Edythe Williams Scott, New York; thence by descent to the current owner, private collection, South Carolina. The young model who posed for the artist was gifted the sculpture, and it has remained in her family for more than 80 years.

Edythe Williams Scott, the model, was an accomplished designer, artist, and educator who had a life-long association with the arts. Her family moved from Florida to Harlem in 1917, and her artistic talents were soon recognized while she was at the Textile High School at 124 West 30th Street. A 1921 Evening World newspaper article describes how she won the national design competition Good Taste in Dress for Young Girls at the age of 17. In 1924, Mrs. Scott won a scholarship to the New York School of Fine Arts; an award that was withdrawn when school officials discovered that she was African-American. She was a founding member of the Art Students Club, exhibiting in Harlem during the Renaissance, and studied under Augusta Savage at the Savage School of Arts and Crafts. She graduated from the State University of New York at Oswego with a Bachelor of Arts degree in economics. Mrs. Scott was the first African-American and first female vocational teacher to be appointed to McKee High School, where she taught commercial art and dressmaking until 1966. Although teaching full-time, Mrs. Scott continued to paint for more than thirty years. Mrs. Scott was a member of the Executive Board of the Council of the Arts, and a member of the Executive Board of the Section of Arts of the Staten Island Institute of Arts and Sciences for 27 years.

This extraordinarily scarce find is the first nude figure by the Harlem Renaissance sculptor to come to auction. Very few standing figures in plaster by Augusta Savage are known to survive today. Theresa Leininger-Miller describes how Savage returned from Paris with about twenty sculptures. Made in the early 1930s, likely in her Harlem studio school, it demonstrates her skill and classical training in figurative sculpture. By 1932, Savage was elected to the National Association of Women Painters, was represented by Argent Galleries and founded the Savage Studio of Arts and Crafts in Harlem. In addition to Edythe Williams Scott, Savage's students included such important artists as Jacob Lawrence, Gwendolyn Knight, Norman Lewis, William Artis and Ernest Crichlow. In 1933, Savage expanded her studio and founded the Harlem Art Workshop at 306 West 141st Street. By 1937, Savage was named the first director of the Harlem Community Art Center, under the auspices of the WPA. Bearden/Henderson pp. 173 and 317; Farrington pp. 103-105; Leininger-Miller pp. 200-201.
Set Alert for Similar Items 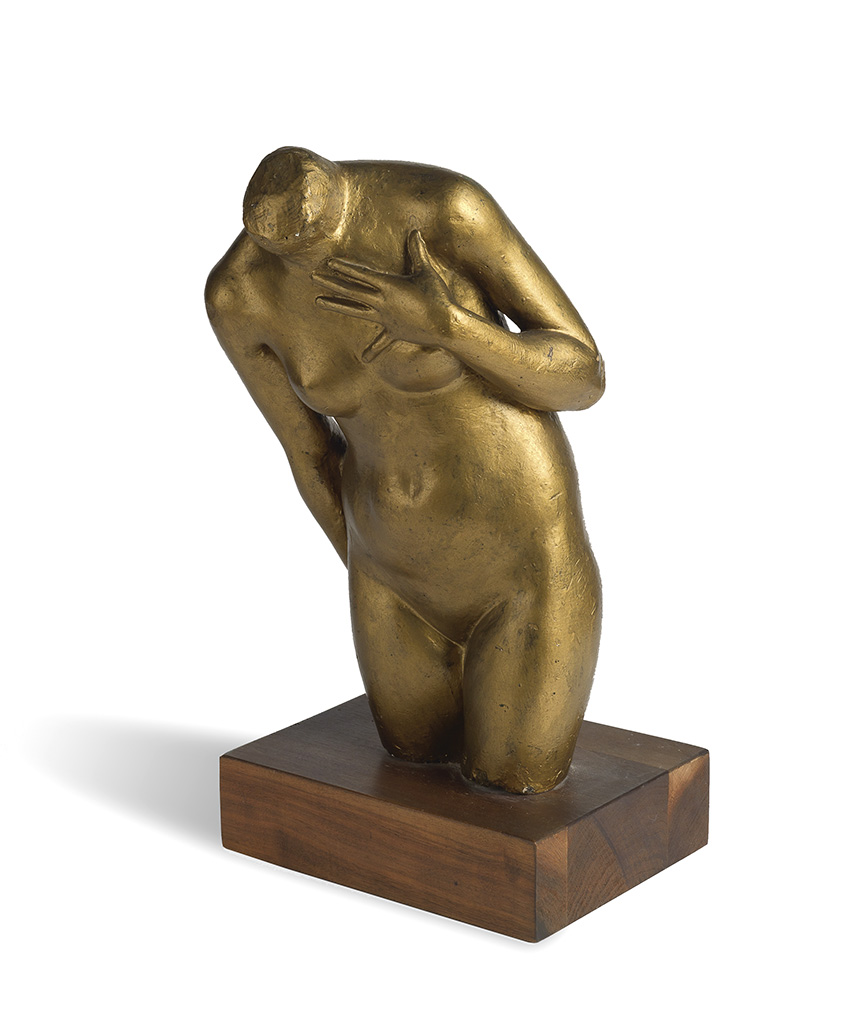