This iconic, life-size painting by Barkley Hendricks is his first important work to come to auction. Born in Philadelphia, Barkley Hendricks studied painting at the Pennsylvania Academy of Fine Arts and Yale University. Since the late 1960s, Hendricks has painted life-sized representations of young, hip models and friends. He pushed the contemporary figure to new heights--realist portraiture on both a human and grand scale, empowering his subjects with a keen sense of style steeped in the skill of academic European portraiture. In Bid' Em In/Slave (Angie), Hendricks cultivates the formal, sexual and cultural tension of his model with her pose against a pink background. Hendricks makes Bid' Em In/Slave (Angie) both a powerful, arresting female figure and an outstanding painting. 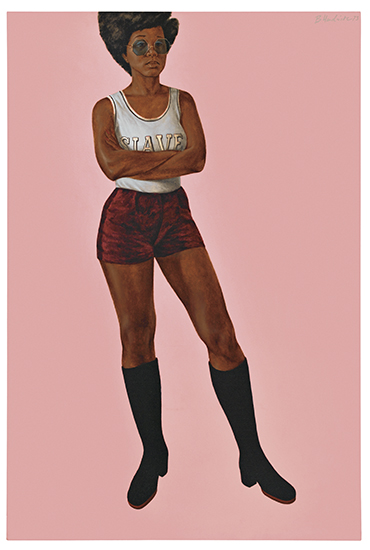