Provenance: the artist, Paris; James and Bunny LeGros, Paris; private collection. According to Leeming, James and Bunny LeGros were, "with Charley and Gita Boggs, James Baldwin and Bernard Hassell, his closest American friends in Paris," and "although they were much younger than Beauford, became almost surrogate parents."

Exhibited: Embassy of the United States, 2 Rue Florentin, Paris, in conjunction with the exhibition Paris-Sud, 1969, with a typed label on the frame back. In addition, another label is inscribed in ink with the artist's Paris address at 53 Rue Vercingétorix in the 15th arrondisement.

This poetic and modernist portrait of a street sweeper is a culmination of Beauford Delaney's important work in both figurative and abstract painting in Paris, and an outstanding example of his later work. This striking oil is from the same year as his Portrait of Ella Fitzgerald in The Walter O. Evans Collection of African-American Art, the last fully productive year of his Parisian period. The street scene recalls his earlier 1950s paintings of Greenwich Village, New York. However, Delaney has obscured the street background in a haze of swirling yellow strokes, and the figure is bathed in a warm light. Beauford Delaney often painted portraits of friends and famous people that conveyed a warm sense of familiarity. In a sense, Beauford Delaney has painted a metaphorical self-portrait--an isolated man of African descent working in a foreign place, with the broom representing the artist's paint brush. In Le Balayeur, Delaney makes one of the ubiquitous and anonymous street workers of Paris into a heroic and modernist figure. Leeming p. 117. 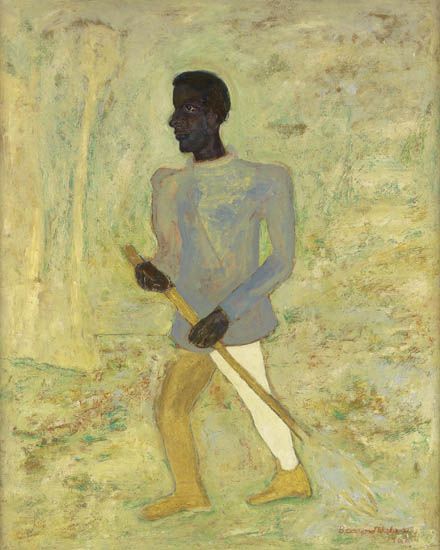