Exhibited: Beauford Delaney: The New York Years (1929-1953), Philippe Briet Gallery, New York, April 9 - May 28, 1994, with the gallery sticker on the back. Carl Leeds had been the owner of the painting for over 50 years until his passing in 2007. The painting was inherited briefly by his partner of 44 years, Robert Abramson, who just recently passed away.

This untitled scene of Washington Square Park is a wonderful example of Beauford Delaney's scarce "Greenwich Village Idyll" paintings. These early 1950s works represent a culmination of the New York influences on the artist and his developing personal voice. Delaney, like other artists he met at the Art Students League, such as Jackson Pollock and Charles Alston, painted New York scenes. By the 1950s, influenced by Stuart Davis, Delaney began to paint with a flatter perspective, simplified forms and a more direct application of paint. Delaney befriended Davis after being including in a group exhibition at the Whitney Museum in 1950, and they later went to jazz clubs together.

Delaney was inspired by his immediate environs, but also enjoyed a residency at the art colony Yaddo, near Saratoga, NY, in 1950 and 1951. He had solo exhibitions at Roko Gallery in New York in 1950 and 1952, and at the University of Maine Gallery in 1950, which included many of these Washington Park paintings. According to Ann E. Gibson, in the early 1950s Delaney painted with passages of impastoed brushstrokes "to unify his buildings, people, trees, and sidewalks, identifying them with the material substances that compose the natural world." Delaney painted in his Greene Street studio when the Village was the center of the New York avant-garde, where he was relatively free to be black, gay and an artist. Delaney's colorful scenes of the Village are free of gritty urbanism and reveal his idealistic outlook. Canterbury pgs. 15 and 22. 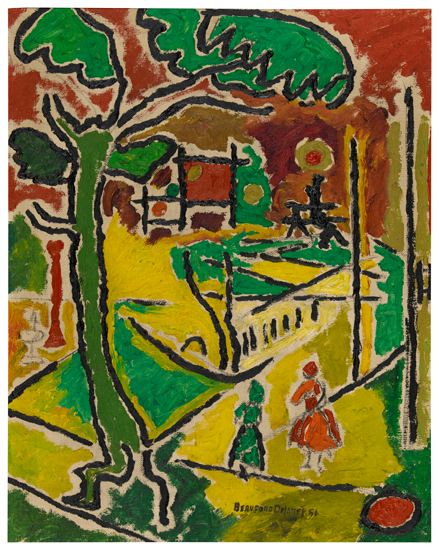