Beauford Delaney had many early associations with music and jazz. As a part of the Village art scene in the late 1940s and early 1950s, he went to jazz clubs with Stuart Davis, and depicted such scenes in paintings like Jazz Quartet, 1946, Beauford Delaney's Loft, 1948 and Untitled (Jazz Club), circa 1951, and painted portraits of Louis Armstrong, Duke Ellington and Ethel Waters.

When he moved to Paris in 1953, following his friend James Baldwin, Delaney found another community of expatriate artists, writers and musicians like the singer Jimmy "Lover Man" Davis and guitarist Gordon Heath, whose Club de l'Abbaye became the place to hear American swing and be-bop.

Painted on Christmas Day, this atmospheric work on paper was part of a series of minimal chromatic abstractions made in Paris through the early 1960s. Hia Paris paintings reflected a sensitivity to light and a quieter voice than the noise and tumult of Greenwich Village. Particularly in this body of work, art historian Michael D. Plante sees a subtle "silence"--"nothing is described nor contoured; the viewer is left to be seduced by Delaney's painterly touch." He also painted a Composition in Blue, oil on canvas, which was included in his solo exhibition at Galerie Paul Facchetti in June of 1960 and loaned to the Pittsburgh International Exhibition of Contemporary Painting and Sculpture at the Carnegie Institute in 1962. Conwill pp. 34-35; Canterbury p. 87. 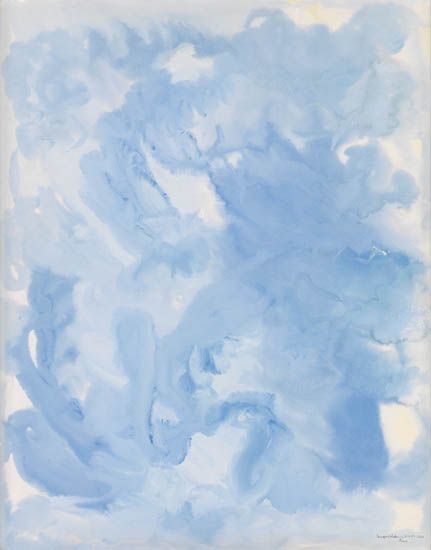