Belkis Ayón (1967-1999) was an Afro-Latina printmaker and professor born in Havana, Cuba. Ayón is best known for her innovations in collagraphy. Ayón studied engraving at the prestigious Instituto Superior de Arte in Havana (ISA) and joined its faculty after graduation. Much of what is being discovered and uncovered of her works are credited to her first US retrospective Nkame: A Retrospective of Cuban Printmaker Belkis Ayón. The exhibition not only revealed the mystical workings of a African religious society but also the gamut of Ayón's artistry and investigative skills.

Ayón's formative years as an artist were plagued by the periodo especial in Cuba which began with the collapse of the Soviet Union. This most difficult era in Cuba was a time when vital resources, let alone art supplies, were not readily accessible. However, this is also the time in which Ayón rose to prominence in the contemporary art world: Ayón's work was exhibited at the 16th Venice Biennale, the Havana Biennial and the Bharat Bhavan International Biennial of Prints in India. In 1999 she was awarded four residencies including with the Brandywine Workshop, the Tyler School of Art at Temple University, the Bronski Center at the Philadelphia College of Art, and the Bensen Hall Gallery, Rhode Island School of Design. 1999 was also the year Ayón committed suicide, and left behind a body of work that has broken barriers between US-Cuban relations and has pioneered discourses regarding African iconography and influence on Cuban culture and society. Her sister Katia Ayón Manso is the representative of the Estate de Belkis Ayón, located at the Ayón family home in Central Havana where Ayón grew up.

After her untimely death at the age of 32, Belkis Ayón left behind an oeuvre that is important to the history of printmaking, traversing Cuban, contemporary art, and gender boundaries. Her unsettling subjects are typically depicted against stark black patterned backgrounds, as oblong almost shapeless silhouettes with hollow, almond-shaped eyes. Her body of work functions as a reflection on the mysticism and traditions of the secret religious Afro-Cuban brotherhood, Abakuá Secret Society. Described in the United States as "an Afro-Cuban version of Freemasonry," this fraternity was fathomed in Nigeria and founded by enslaved Africans in Cuba as a society of refuge against the backdrop of the vile institution of slavery. The esoteric practice is composed of the usage of a creolized African language, rituals and ceremonies, and involves many iconographic figures such as princess Sikán whom Ayón used as a vessel to investigate the society. She is quoted as saying, "They said [Abakuá] was a secret society, only for men, and that aroused [her] interest." That interest was figuratively personified as princess Sikán who is recorded as the only female figure in Abakuá lore. Ayón's inclusion of egalitarian iconography with the incorporation of princess Sikán not only supplanted the Abakuá Secret Society but refuted societal norms. She is known for having been the only and the most prominent figure with an extensive body of work that traverses and investigates the exclusive Abakuán brotherhood. Belkis Ayón was a master at her craft and a pioneer in the world of large-scale print installations and collographs, a labor-intensive art practice that cemented her place in today both in art history and the art world. Her artworks are featured in the collective exhibition Faz escuro mas eu canto [It is dark, but I sing] the 34th edition of the São Paulo Biennial September 4 - December 5, 2021. 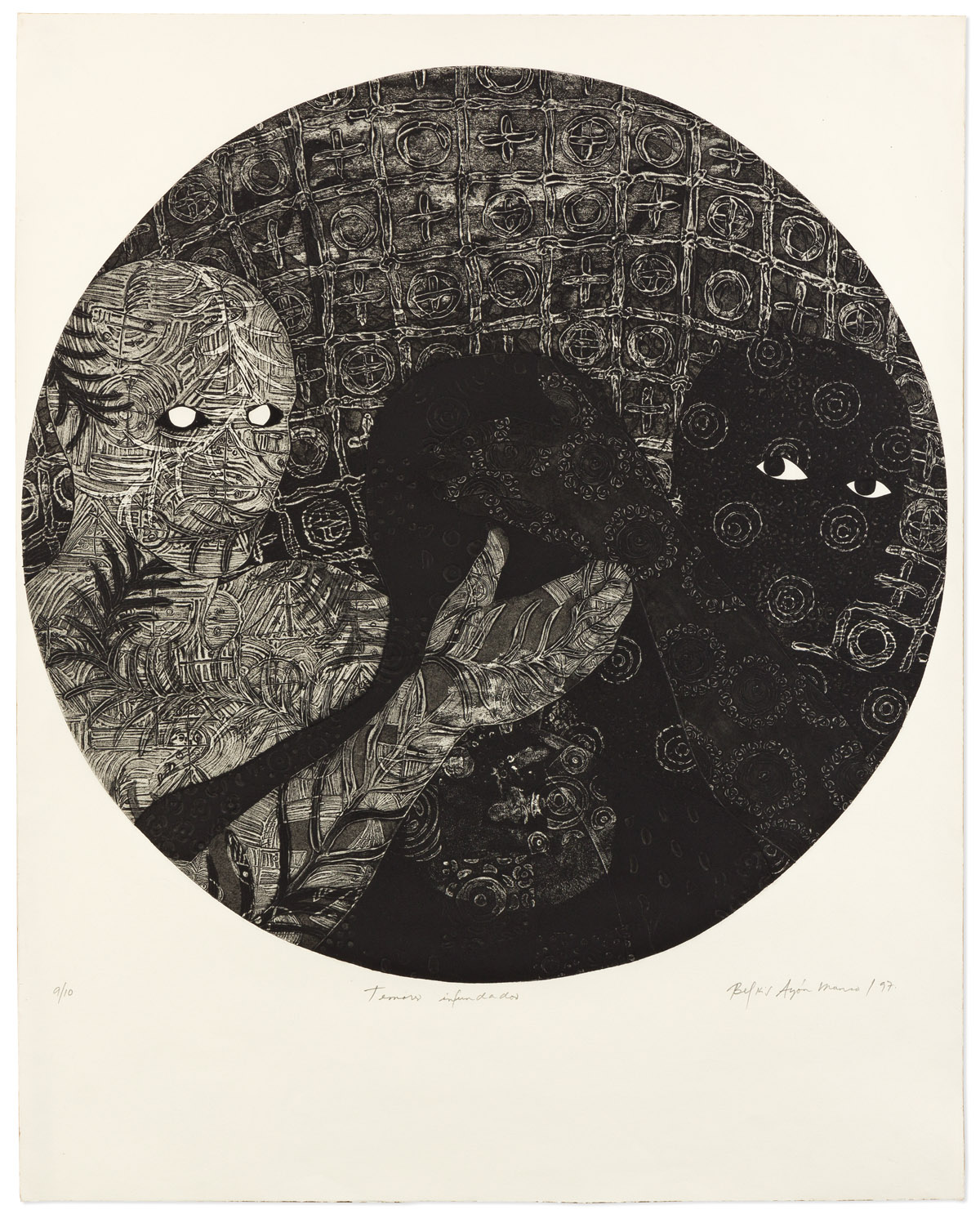