Price Realized: $ 150,000
Price Realized: $ 167,500
?Final Price Realized includes Buyer’s Premium added to Hammer Price
Estimate: $ 70,000 - $ 100,000
BLACK BIRDS. 1929.
62x45 inches. Hachard, Paris.
Condition A-: expertly repaired tears through margins; restoration in top right and bottom left corners.
The Black Birds was an all-black musical revue that was the brainchild of Lew Leslie, a white producer. Its original star was Florence Mills, who catapulted to fame in 1922 as the star of Shuffle Along. The Blackbirds opened at the Alhambra Theatre in Harlem, New York, in late 1925 and went on to become a hit not only in New York, but also in Paris and London, where the show was performed 276 times the following year. Upon Mills' untimely death in 1927, Adelaide Hall (another alumna of Shuffle Along), stepped in to fill her role. Hall, herself, was one of the shining gems of the Harlem Renaissance. Throughout her career she performed with such greats as Duke Ellington, Art Tatum, and Fats Waller. In the 1920s, she was America's most celebrated black female performer, and was second only to Josephine Baker in Paris. In 1929, The Black Birds went to Paris where it sold out the Moulin Rouge for three consecutive months. This poster has never been seen before. It is also the last, and by far, the best creation of Colin's "Black Period." The Revue Negre in 1925 was innovative, but a little rigid, the Bal Negre in 1927 was sensuous and full of rhythm, but The Black Birds, in 1929, was truly Modernist. Of the three characters depicted, the one on the left is wearing an asymmetrical black rectangle of a coat, a bowler, sunglasses and earrings. An avant garde costume in any day or age, but bizarrely prescient of the fashion of future generations of black performers. He is also, ingeniously, wearing a pin of the "Moulin Rogue." Standing in the middle is Adelaide Hall herself, a sexy woman in a pink dress, flowered hat, and irresistible smile. The treatment of her shoulder and arm is cubistically stylized. Finally, there is the trapezoidal shape of a man with a marvelously drawn hand (the same as in Olive Chez les Negres, another Colin poster for an African-inspired show at the Theatre des Champs-Elysees). The graphic rhythm of the poster is amazingly strong, with the characters' heads all daringly cut off by the text. Previously, the only known version of this poster was the painted maquette in the Bibliotheque Nationale de France (see Colin cover). That image lacks text and the cropped heads seem peculiar. Rennert/Weill no. 18, p. 33 (var), Paul Colin et les Spectacles 114, p. 91, Modern Publicity, The Studio, London 1930, p. 96.
Set Alert for Similar Items 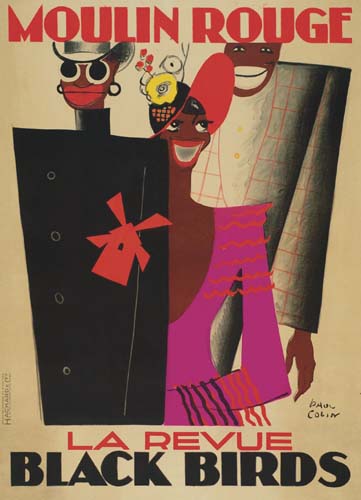