Price Realized: $ 3,000
Price Realized: $ 3,750
?Final Price Realized includes Buyer’s Premium added to Hammer Price
Estimate: $ 4,000 - $ 6,000
"I WAS INVOLVED WITH BERNARDO BERTOLUCCI IN . . . 'THE SHELTERING SKY'" BOWLES, PAUL. Archive of 31 items Signed, in full or "Paul B.," each to Gregory Stephenson: Two Autograph Letters * 25 Typed Letters * 4 Autograph Postcards. The letters, discussing publication of works by himself and other writers, and complaining of the bureaucratic and meteorological obstacles of life in Tangier. Together 31 pages, 4to or 12mo, letters on onionskin paper, some on personal stationery; condition generally good. Each letter with the original envelope. Tangier, 1978-91
Set Alert for Similar Items

12 April 1978: sending a typed poem [present, on a half-sheet of paper, unsigned] beginning, "There have been times, what with this and that / when the whisper of words was not enough."
27 May 1978: ". . . [T]hat's the way here; no one will cash checks if he can avoid it. At the same time, you can find people who will accept huge checks in dollars, made out on American banks, and without a murmur, if only someone whispers in their ears that the person has plenty of Money!
"I must say I admire your system with regard to running your magazine--you pay for contributions, and that is a rare phenomenon nowadays, particularly for poems . . . . [T]hey consider the honor of being published sufficient recompense. . . ."
14 June 1978: ". . . Things may get here late, but they generally reach me, unless the customs or censors get involved. In that case, one wishes the things had got lost before they arrived in Morocco, for one is obliged to make many visits to the various governmental agencies involved, and it becomes Kafkaesque. . . ."
22 January 1980: ". . . [T]here has been absolutely no change in the attitude of the Moroccans since the Iranian trouble. They feel very little kinship with the Shia--in fact, some call them Jews--so that the excitement remains exterior to their interest. I do note a certain disappointment in the unbelligerent stance of the United States; they feel that America is afraid to attack Iran, and they wonder why. . . ."
12 May 1981: ". . . I'm sorry the story is lost. It was about Andrew Layton's teeth. (18th Century event, happening in Essaouira.) I'll have to look and see what else I have, and send it to you in a day or so. The trouble is that like an idiot I sent you the original typescript, and now have nothing . . . ."
17 June 1982: ". . . Once again I'll hold classes for the New York School of Visual Artists; I don't enjoy it at all, but it helps to pay part of my federal income tax (which is higher this year than it's ever been, quite as I expected when I heard that Reagan was 'lowering' taxes--for those with incomes over $250,000)."
12 January 1985: ". . . I just finished correcting the galleys for a volume of stories I translated from the Spanish, by a Guatemalan student I had here in 1980. City Lights is publishing it in the Spring. I expect William Burroughs here on the 19th of this month; I haven't seen him in years."
20 February 1990, ALS: ". . . I was involved with Bernardo Bertolucci in the filming of his version of The Sheltering Sky, and it took a lot of time and energy. He shot a lot of the film (particularly interior shots) here in Tangier before setting out for the south. By now he has finished the filming (in Niger) and is editing. I don't think the picture will be shown before autumn. . . ."
with--Paul Bowles. Let it Come Down. Signed and Inscribed, "for Gregory Stephenson / inscribed in Tangier / on the occasion of his / first visit there," on the half-title. 8vo, publisher's cloth, fading at spine ends; dustjacket with uneven toning and minor chipping at edges. London, (1952); inscription: Tangier, 15 August 1979. 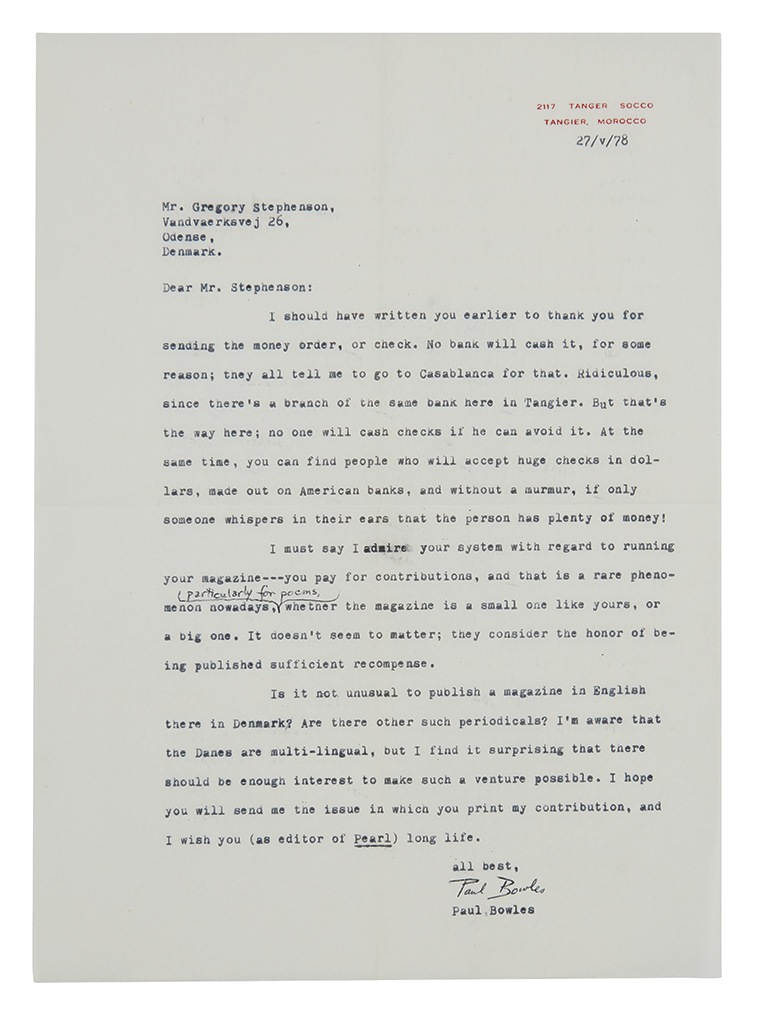