Price Realized: $ 30,000
Price Realized: $ 34,500
?Final Price Realized includes Buyer’s Premium added to Hammer Price
Estimate: $ 10,000 - $ 15,000
Broadway at Night [Broadway on a Saturday Night.]
Pen and Ink with blue watercolor heightened with white gouache, on board, 101/2x 201/2 inches. Signed lower right. 1943.
"Apparently my normal readers are equipped with 20-20 vision and powerful magnifying glasses, for they wrote en masse to inform me that nuns always travelled in pairs, and besides, Broadway on a Saturday night was no place for a nun to be, alone or accompanied. I answered the first batch of mail, pointing out that a lone nun is stationed outside the Capitol Theater every night, including Saturdays. But the matter did not end there, The Knights of Columbus demanded an explanation; the letters snowballed and delegations were arriving in the offices of The New York Times.
[The editor] informed me that the easiest and most sensible way to put an end to these disturbances was for me to write an open letter of apology to be printed in The Times' editorial page. I suggested a counter-proposal . . . An appointment was arranged with the Censor of Books at St. Patrick's Cathedral. . . He was completely familiar with the drawing and fed up with the stupidity of the parishioners who were also bombarding him with letters. He assured me there were many orders in the Church which allowed nuns to travel alone, and further, that the proper place for a nun on a Saturday, or any other day, was out with the people. He couldn't have been more understanding or nicer if he had been a rabbi. . .
I returned home and wrote the following letter of apology adresssed to the Editor of The New York Times: 'The drawing of Broadway on Saturday Night published on the first page of the Sunday drama section was not intended to ridicule any of the individuals depicted. My apologies are extended to those whose sensibilities may have been offended. I meant no disrespect. In all humility I apologize to the U.S. Armed Forces, the French navy and marines, the pimps, shills girls, blind man, lone nun, and all opthers in the drawing.'
The letter of apology, needless to say, was never printed. A form letter advising the letter writer to contact his local priest eventually finished off the incident."
published in the new york times 23 may 1943.
Exhibited at Katonah Museum of Art "In Line with Al Hirschfeld" exhibit, 1998
Set Alert for Similar Items 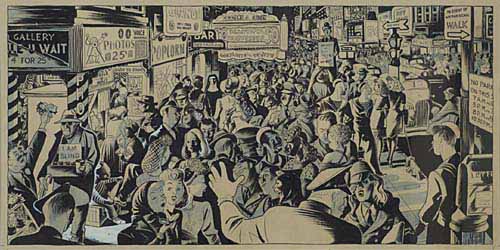