This painting is from the important series of works on paper Alston completed during his Rosenwald Foundation scholarship to travel through the South between 1940 and 1941. This scarce gouache is one of a few known today. According to Daniel Schulman, Charles Alston's Rosenwald Fellowship project planned "to help do for the South in art what Grant Wood, John Steuart Curry and Thomas Hart Benton accomplished for the Middle West." His Rosenwald artist statement states his aim to create African-American imagery as iconic and uniquely American as Grant Wood's American Gothic.

Lindsay J. Twa uses an archival photograph of Shade Chadman from Fisk University to illustrate how he aimed to produce "his equivalent to Wood's Iowa farmer and daughter:"

"Here, Alston isolates his rural figure, capturing the sitter from a viewpoint slightly below. This compresses and distorts the construction of the face at the same time as it elongates his neck and upper body. The figure seems simultaneously monumental and emaciated. No longer a portrait, nor a straight 'ethnographic type,' Alston's worker becomes an expressive testament of fortitude in the face of want."

Unfortunately, Alston's Southern project was cut short by his enlistment into the army in 1942. Alston produced vivid imagery during this Rosenwald period while traveling through the Carolinas, Alabama, Mississippi, Arkansas and Georgia. In Durham, NC, he followed Giles Hubert, an inspector of the Farm Security Adminstration, to many farm sites, and then ended up in Atlanta. There, Alston found a studio in a library of Atlanta University, where he lived with Hale Woodruff. Schulman describes two other gouaches from this period, Farm Boy, 1941, in the collection of Clark Atlanta University Art Galleries, and another semi-Cubist work entitled Ruin; another gouache, Tobacco Farmer, 1940, was also in the collection of Michael Rosenfeld Gallery. Kenkeleba p. 22; Schulman pp. 90-91; Twa p. 12; Wardlaw p. 33.
Set Alert for Similar Items 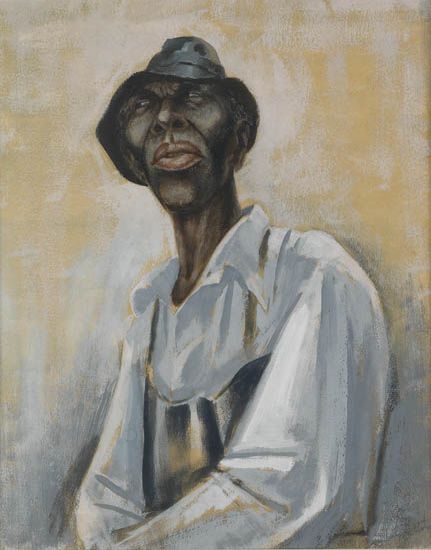