Exhibited: Charles White, ACA Galleries, New York, March 17 - April 5, 1958. This drawing was one of nine included in this solo exhibition, and is listed in the catalogue with the owners' name, alongside three works owned by Mr. and Mrs. Harry Belafonte. Gedeon also cites an alternate title Freedom Now and an undated exhibition of this drawing at the Du Sable Museum of Afro-American History, Chicago.

O Freedom is an iconic and important drawing by Charles White that was exhibited only in 1958, and has not been seen publicly in sixty years. This impressive example of the artist's mid-career work is a confident expression of the realism one associates with White. With O Freedom the artist created a powerful, spiritual image - an optimistic young man sowing seeds while he extends his sinewy arms in a grand gesture. The life-size drawing conveys an undeniable physical presence with this powerful figure.

Between 1953-55, Charles White drew a number of large, realist images of youthful men and women working in fields - including the Art Institute of Chicago's Harvest Talk, 1953. In his subsequent 1956-57 series, White made more expressive representations symbolizing various African-American spirituals with titles such as Mary Don't You Weep, I've Been Buked and I've Been Scorned and Ye Shall Inherit the Earth. There is also a 1955 study for O Freedom, drawn on two joined sheets of paper, listed in Gedeon as D101, which is illustrated in both Finkelstein's Charles White: Ein Künstler Amerikas, pl 31, and Benjamin Horowitz's Images of Dignity, p. 62. Gedeon D102.
Set Alert for Similar Items 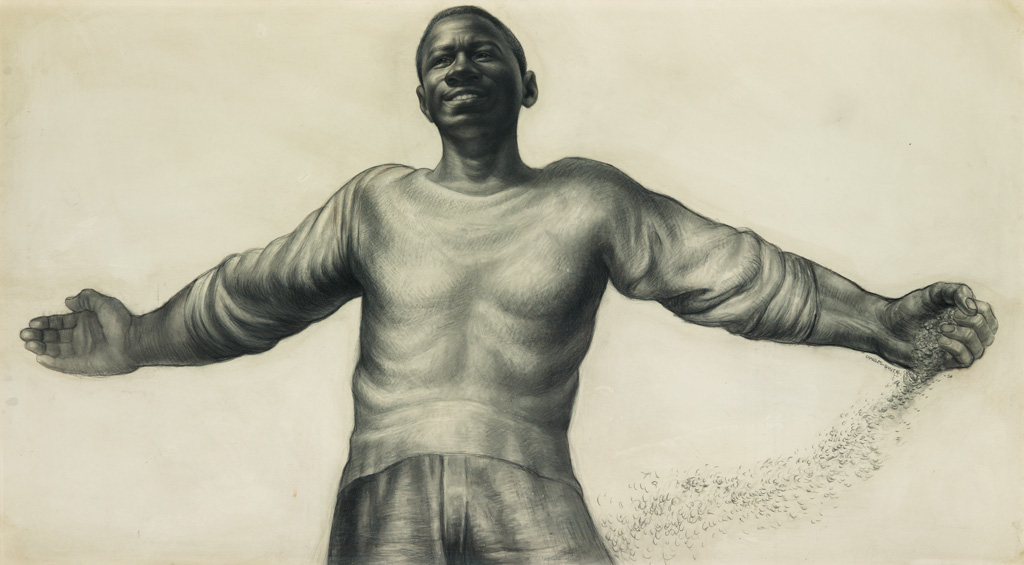